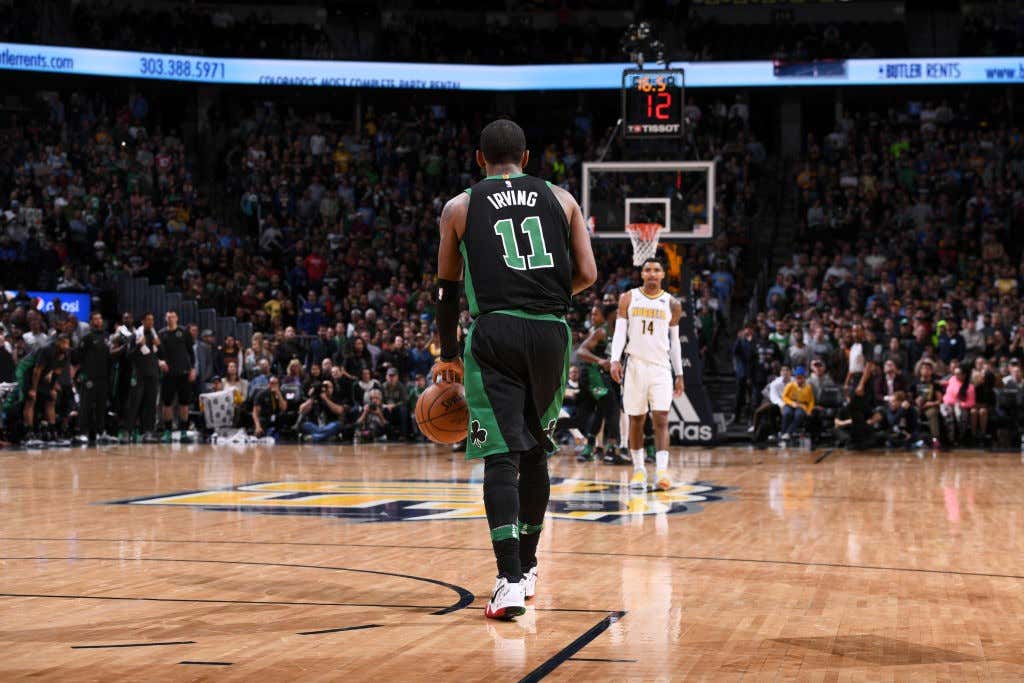 We all remember what happened the last time the Celtics made their way to the Mile High City and the Pepsi Center right? In classic Celtics fashion they got off to a great 20 point lead, only to blow it and ultimately squeak by with the 111-110 win when Will Barton’s near half court shot came up just short and a last second tip in came after the buzzer. Jaylen hit a big fourth quarter three, Kyrie led the way with 27, and overall it was a good win in a building that is very tough to play in for visiting teams. Well now they meet again, the Celtics still in a weird spot where some nights they look like the best team in the East and others they look like they’ve never played the sport before. The Nuggets enter this game with the second best record in the Western Conference at 8-1, while also owning the third best point differential in the entire NBA. In other words, to this point of the season, they are absolutely legit and a team that is poised to give the Celtics a great test.

What has me so excited for this early matchup is what a test it is for both sides. The Celts are looking to bounce back after a brutal collapse in IND, and another quality road win will help a lot of Celtics fans relax about the early struggles. For the Nuggets, they want to prove they are legit, and moving to 6-0 at home while beating a top team from the opposing conference will certainly help drive that narrative. What has made the Nuggets different so far this year isn’t what you may think. Normally with DEN you think of them as this high flying offense that scores a shit ton of points and wants to get into a shootout with you. Well I took some time to look into their strong start and what may be causing it, and this is what I found

The Nuggets are a much better team defensively this season

We all love to talk about the Celtics and their league best defense, well let’s not act like the Nuggets haven’t been right there with them to start the year. In a season in which every team seems to be dropping 130 in regulation, the Nuggets are holding opponents to just 101.9 points a night, which is the second lowest total outside of the Celtics (99.8). They are owners of the 3rd best defensive rating (100.9, MIL is 100.1). Opponents are shooting just 44.7/33.7% and make just 9.7 3PM a night, which is the 7th fewest in the NBA but considering the Celts are at 9.1 and lead the NBA, it’s fairly close. This is a huge improvement defending the three from where they were last year (21st) and really overall (23rd Drtg). Getting someone like Millsap back certainly helps, and this now looks like a much more balanced team

Nikola Jokic is a goddamn monster

If you’ve watched the Nuggets at all, you already know this. Jokic vs Horford is one of the matchups I can’t wait to see, because nobody passes better from the big man spot more than them. Both are so crucial to how each of their respective offenses flow, the Celtics are going to have their hands full limiting his production. They couldn’t really do it last time they were in this building, and you look at how Jokic is being used this year and it’s pretty crazy.

Jokic doesn’t even play 30 minutes a night and throws up 18/10/7.7 on just 12 FGA a night. That is utterly ridiculous. Based on how the Nuggets use him, it’ll be an interesting test to see how the Celts defend him. For example, the Nuggets have Jokic as the roll man in the P&R 18% of their possessions, and he averages 1.16 per possession shooting 50%. You’re going to see him P&R and pick and pop a lot at the top of the key, similar to how the Celtics use Horford. This is important because they use his passing skills to find cutters and things of that nature which helps create space in the paint. It’s a very similar idea to what the Celtics do offensively, so I’m interested to see how executes it better.

Despite what you may think, the Nuggets do not rely on the three

One of the biggest changes this year is the Nuggets are no longer super reliant on the three point shot. Last season, they took 30.9 3PA which was the 8th most in the league. They were decent, making 11.5 and averaging 37%. This year, they’re down slightly to 28% which ranks 23rd and only make 8.6 3PM which is 29th in the NBA. So even without that as a main part of their offense, they are still putting up 111 a night. That just goes to show you how legit their scoring can be.

Instead, they want to post you up. They average the third most post ups in the league so far and shoot 53% on those type of plays. They want to get into the paint where they shoot a ridiculous 67.8% (5th in NBA). To me, part of their success in the paint is because they get teams on the move on the defensive end. This is a team that leads the NBA in secondary assists and is third in the league in passes made a game. The ball does not stick with this team, as they really don’t run a ton of isolation (5.3%) and that’s something that will test the Celtics. When you’re in a tough place to play defensive communication and rotations are important, and the Nuggets are going to test the Celts ability to defend at a high level, and not just wait for a DEN guard to iso.

Stop me if you’ve heard this before, but this game is going to come down to defense and rebounding. The Nuggets are 4th in  the NBA in rebounding and 4th in OREB. They obviously are led by Jokic, but this is a good, deep rebounding team especially from their guards and reserve bigs. You already know Mason Plumlee is going to have 3 or 4 brutal OREB because that’s what they do. They attack the offensive glass with the best of them.

So far, they are much better in close games

Long time Nuggets fans will tell you, one of the more frustrating part of rooting for this team was they often times collapsed and lost games they should win. Well last year gave us the sense that maybe they were starting to figure this out as they went 10-5 in games decided by 3 points or less, and already this season they are 2-0 in that situation.

When things get into the clutch, this team turns up the defense, as they have an 85.2 Drtg in clutch situations. Just so you know, according to NBA’s clutch qualifications, they’ve already had 5 games that included that scenario, which is a pretty good sample considering they’ve played 9 games. Jokic has been awesome, leading the team in scoring (3.6 points) and FG% at 63.6%. He even defends when it matters with a 82.7 Drtg. No longer can you just assume this team is going to collapse when things get tight. Instead, they almost kick it up a gear and are the best versions of themselves. Seeing as how the Celtics can’t blow anybody out it seems like, this is a big area for me to keep an eye on.

So far when the Celtics have been “tested” it’s been a mixed bag. They failed their test up in TOR, but passed it against MIL. Technically they failed against IND given the ending, but that game still showed progress. These games are important not because they are going to tell us anything about what is going to happen in the playoffs, but they provide a nice measuring stick to see how they look against some of the better teams in the league. Considering how this trip started, that almost puts a little more importance on this game, because from here they go to PHX/POR/UTA, so for them to come away 3-2 and win this trip, you have to win tonight given how tough POR/UTA are to play on the road. Outside of TOR/MIL this is the best team the Celtics have played this so far this season, and they are going to have to play near flawless basketball to pull out this win. For an early November meeting it doesn’t get much better than these two teams, let’s just hope it lives up to the hype.