I’m barfing my guts out as I type this. Stay with me. The world is so soft today we can’t even get a hard fast winner on Gold Gloves. Can’t even say which multi-millionaire professional athlete is better than the other. Nope. Gotta hand out several trophies because heaven fucking forbid someone’s feelings get hurt. How am I supposed to tell my son that Freddie Freeman isn’t the best defensive 1st baseman in the NL? Stuff yourself, pal. There are winners and losers and in this case your son is growing up to be a  M A J O R   F U C K I N G   L O S E R. Somewhere King Solomon cries.

Anyways it’s hard to imagine Rizzo cares about a gold glove outside of being better than his peers. Like I can’t see him clearing space on his trophy shelf at home to honor half a gold glove. Especially when he’s balls deep in his longest offseason since 2014 meaning there’s a v.good chance Rizzo doesn’t even know yet that he won a GG. He’s probably on a couples’ massage getaway in some exotic part of the Carribean only accessible by local fishing boat or some shit. That’s what I would do after the way 2018 came to an end. I’d be on the first plane to paradise with the goal of forgetting September 2018 in its absolute entirety. But that’s not the point. The point is Rizzo likely/probably/most definitely does not give a shit about this stupid award and I’m sorry he has to split it with a southern mouth breather. 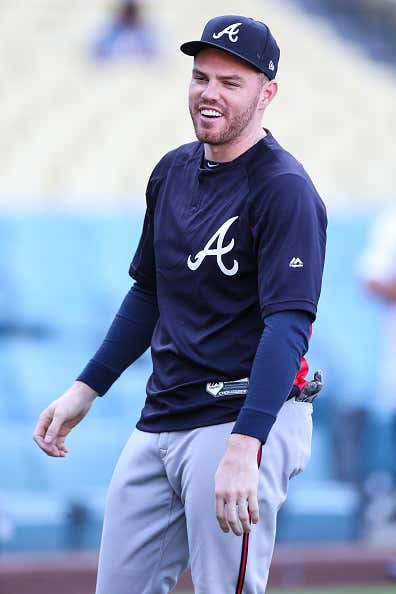 Javy on the other hand is a downright disgrace. It’s blasphemous and atrocious and horrible no good very bad stuff. The poor guy is probably devastated. Everything in this game means so much to Javy which is why he plays the way he does. He’s a kid. He doesn’t just want this trophy, he fuckin NEEDS this trophy. Why? Because he knows as we all do that he’s the most electrifying defender in baseball. He does more for his team than anyone in the league defensively, which includes playing all over the field at a moment’s notice. But none of that matters because Rawlings has an agenda. What that agenda is, I have no clue. But the fact Javy doesn’t have a GG can only mean a Rawlings agenda exists.

Tell me more about DJ Lemahieu’s consistency no one gives a shit.

PS – how about these assholes releasing the awards on a Sunday night during the heat of Pats vs. Packers? Is it possible to be worse at anything as MLB is at marketing itself? It’s almost to the point of trolling and I don’t know what to think.