In collaboration with the Sportsteclopedia.com 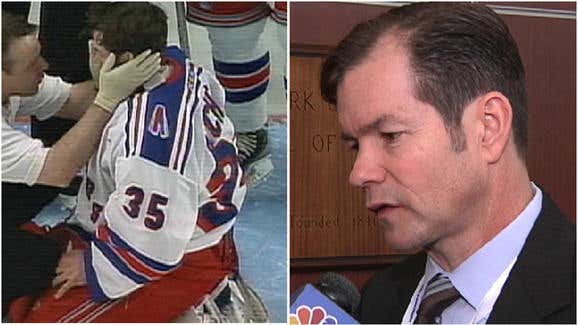 Mike Richter records 39 saves as the New York Rangers beat the Edmonton Oilers 5-2 at Madison Square Garden. Late in the game, Richter is accidentally by Todd Marchant. As a result of the injury, Richter suffers a skull fracture that would end his career as the lingering effects were too much to overcome. Mike Richter at the time held the Rangers all-time record with 301 wins.

Mike Richter was born on September 22, 1966, in Abbington, Pennsylvania. Attending the Germantown Academy, Richter became one of the top Junior Players in the United States, playing for Team USA in 1985 and 1986. After moving on to Wisconsin, Richter who was the 28th overall pick by the New York Rangers was the starting goalie for Team USA at the 1988 Winter Olympics in Calgary.

Mike Richter debuted in the NHL in 1989 and slowly won the starting job from John Vanbiesbrouk. Though not without controversy as the two battled for several seasons before the Rangers traded Vanbiesbrouk away following the 1993 season. With nobody left to battle, Mike Richter had the finest season of his career posting a record of 42-12-6, with a 2.57 GAA and a .910 save percentage. That season saw Mike Richter win the All-Star Game MVP representing the Rangers in front of the home fans at Madison Square Garden. In the playoffs he helped the Rangers win the Stanley Cup for the first time in 54 years, making several key saves in their Game 7 win over the Vancouver Canucks.

After backstopping the Rangers Stanley Cup win, Mike Richter remained one of the top goalies in the NHL for several seasons. So popular was he that the Liberty image on his mask, became an alternate logo used on a third jersey for the Rangers. In 1996, in the World Cup of Hockey, Richter again representing Team USA, was named MVP as the Americans upset Canada to win the Gold Medal. Mike Richter struggled late his career as the Rangers went on a lengthy playoff drought. Despite this, he made one more All-Star appearance in 2000. In 2002, Richter again represented the United States in the Winter Olympics at Salt Lake City, capturing a Silver Medal. Just before the injury Richter became the first Rangers goalie to win 300 games. With severe post-concussion symptoms, Richter was never able to return to the ice, as he finished his career with a record of 301-258-73, a 2.89 GAA and a .904 save percentage.