That my friends is what we call a kick squarely to the dick. No other way to spin it, the Celtics threw this game away (literally). After Kyrie makes two huge threes in the last minute to give them a four point lead, it was his blown layup on a great Brad ATO that ultimately cost the Celtics this game. Add that to the fact that no one seemed to want to pick up Victor Oladipo up in transition, no kidding this game ended in disaster fashion. So far in this early season we’ve seen the Celtics have a bit of a problem closing teams out. Every time they made a momentum play, they immediately gave it right back. Whether it was a Bogdanovic three, an Oladipo bucket, or a foul, they never were able to get that big stop on the other end.

But let’s not sugarcoat it, Kyrie makes that layup, the game is over. Such is life with this team and nothing we don’t know already. Layups are hard for all involved. There’s just something about them that gives the players on this team the yips. How many layups did Marcus miss once he got into the paint? Tons. Then you miss multiple fourth quarter FTs, and these are all things you cannot do on the road against a quality opponent.

And then there was the final inbounds play. Not the best pass we’ve ever seen! It’s very rare you get two Brad ATOs and do not score on either of them. Part of me thinks Tatum has to do a better job sealing off his defender, but Hayward has to give him a better toss. Too much of a line drive in that situation.

So instead of a nice 5 game streak before heading out West, the Celts have to stomach the brutal reality that they blew this win. I’ll have more tomorrow once I have time to digest everything we saw, but just know it’s definitely one of those nights where I’ll be playing 2K until like 3am to get this shit out of my mind. 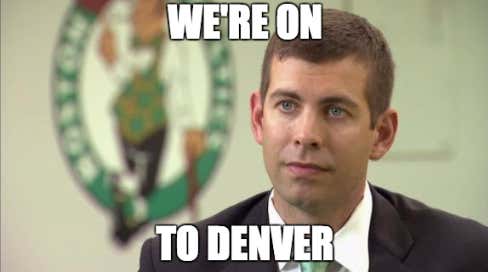