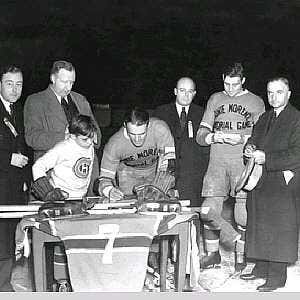 Howie Morenz was born on September 21, 1902, in Mitchell, Ontario. In 1917, Morenz attempted to enlist in the Canadian Army for World War I, but was turned away due to being only 15. After playing with the Stratford Indians of the Ontario Hockey League, Howie Morenz joined the Montreal Canadiens in 1923. The Canadiens won the NHL championship in each of his first two seasons while taking the Stanley Cup in his rookie season in 1924. Morenz was one of the fastest players in the NHL and soon became one of the NHL’s biggest players as it assumed sole possession of the Stanley Cup. Howie Morenz won the scoring title in 1928 and 1931 and was the first three-time winner (1928, 1931, and 1932) of the Hart Trophy, given to the NHL’s MVP.

After 12 seasons with the Canadiens, Howie Morenz was traded to the Chicago Black Hawks in 1924. Morenz would spend one and half seasons in Chicago before, finishing the 1935/36 season with the New York Rangers. After struggling in Chicago and New York, Morenz returned to the Canadiens in 1936 and was having a solid season with four goals and 16 assists in 30 games. On January 28, 1938, in a game in Montreal against the Black Hawks, Morenz lost his balance while chasing down the puck against Earl Seibert and crashed into the board. Upon falling his skate blade was caught in the wooden boards as Seibert fell on top of him. A large audible snap was heard in the Montreal Forum as the Canadiens star had broken his leg in four places.

While recovering at a local hospital, Howie Morenz suffered a nervous breakdown, as the injury ended his hockey career, with 271 goals and 201 assists. Suffering from depression, Morenz had visits limited to family and team officials. On March 8th, days away from getting a chance to leave the hospital, Howie Morenz began complaining of chest pains and collapsed. It was determined that he suffered a fatal coronary embolism that was caused by blood clots in his damaged leg. Three days later a funeral was held at the Montreal Forum with his casket at center ice, next to a floral arraignment, with his number 7.

On the eve of the following season, a benefit game was held to help raise money for Howie Morenz’s widow and children. A similar game was previously held in Toronto to benefit Ace Bailey after he sustained a career-ending injury in 1934. At the Morenz game, the individual awards were handed out as a team combining the Montreal Maroons and Montreal Canadiens took on players from the other six NHL teams. Johnny Gagnon of the Canadiens scored a goal to give Montreal an early 1-0 lead. However, Dit Clapper of the Boston Bruins and Johnny Gottselig answered to give the NHL a 2-1 lead at the first intermission. Cecil Dillon of the New York Rangers made it 3-1 with the only goal of the second period. Pit Lepine of the Canadiens cut the deficit to one, with an early third-period goal. However, the NHL answered with a pair of goals in 43 seconds from Charlie Conacher of the Toronto Maple Leafs and Sweeney Schriner of the New York Americans. With five minutes left Marty Barry of the Detroit Red Wings, scored to make it 6-2 in favor of the NHL stars. Montreal would make a late charge as Babe Siebert scored with just under four minutes left, while Gagnon added a second goal 50 seconds later. Paul Haynes of the Canadiens scored with 45 seconds left, but they could get no closer as the game ended with a final of 6-5.