The Hard Factor boys are going to each showcase a candidate they endorse, not for their party affiliations or policies, which is boring, but for their hilarious stories. You have probably heard some of this shit if you listen to the Hard Factor podcast every Monday through Thursday, which you should.

So here is my personal favorite politician from the 2018 midterms, who I am officially endorsing. 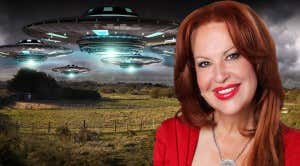 U.S. House of Representatives candidate in Florida, Bettina Rodriguez Aguilera. Yes I know she technically did not win her primary, but I implore you to read this blog and then consider writing her in on your ballot.

Rodriguez Aguilera claims she was taken aboard a spaceship when she was a young girl by extraterrestrials who were blonde haired and resembled the Christ the Redeemer statue in Rio de Janeiro in appearance. These peaceful beautiful space aliens told her that the “center of the world’s energy is Africa” and that thousands of non-human skulls were once discovered in a cave on the Mediterranean island of Malta.  Pretty cool history lesson there she was privy to.

Since her initial abduction she claims she has witnessed other paranormal activity like seeing a UFO at age 17. She also claims she has been in touch with the aliens telepathically long after the abduction. So it turns out she was gifted one of the top mutant powers in the X-Men universe, telepathy, by these aliens, which was pretty fucking generous of them.

Listen I don’t believe this nut job for a second, but let’s just say she did get abducted by aliens. If she did, she deserves to be in Congress if that’s what she’s going for. I know if I was abducted by aliens, running for public office to try and help people, would not be on my list of things to do.  I’d be crazier and angrier than Randy Quaid on a bender, at all times, just shouting at the skies.

Also the nerve of her to even run after publicly admitting to being abducted by aliens is absurd. She has a stunningly poor level of self awareness, but her nerves are straight steel. This is more impressive then when the kid who literally shit himself in my school cafeteria and then ran back to class dripping diarrhea down the halls through the bottom of his jean leg holes, had the balls to run for elementary school President a few weeks later. It didn’t turn out so good for “Shit Leg Steve” and I don’t think it’s ever going to turn out great for “Anal Probe Aguilera” either, but you have got to admire their resolve.

Don’t forget to vote this Tuesday. No one’s too cool to vote. That’s like thinking you are tougher than the fucking sun.

Get your EXCLUSIVE Hard Factor Merchandise