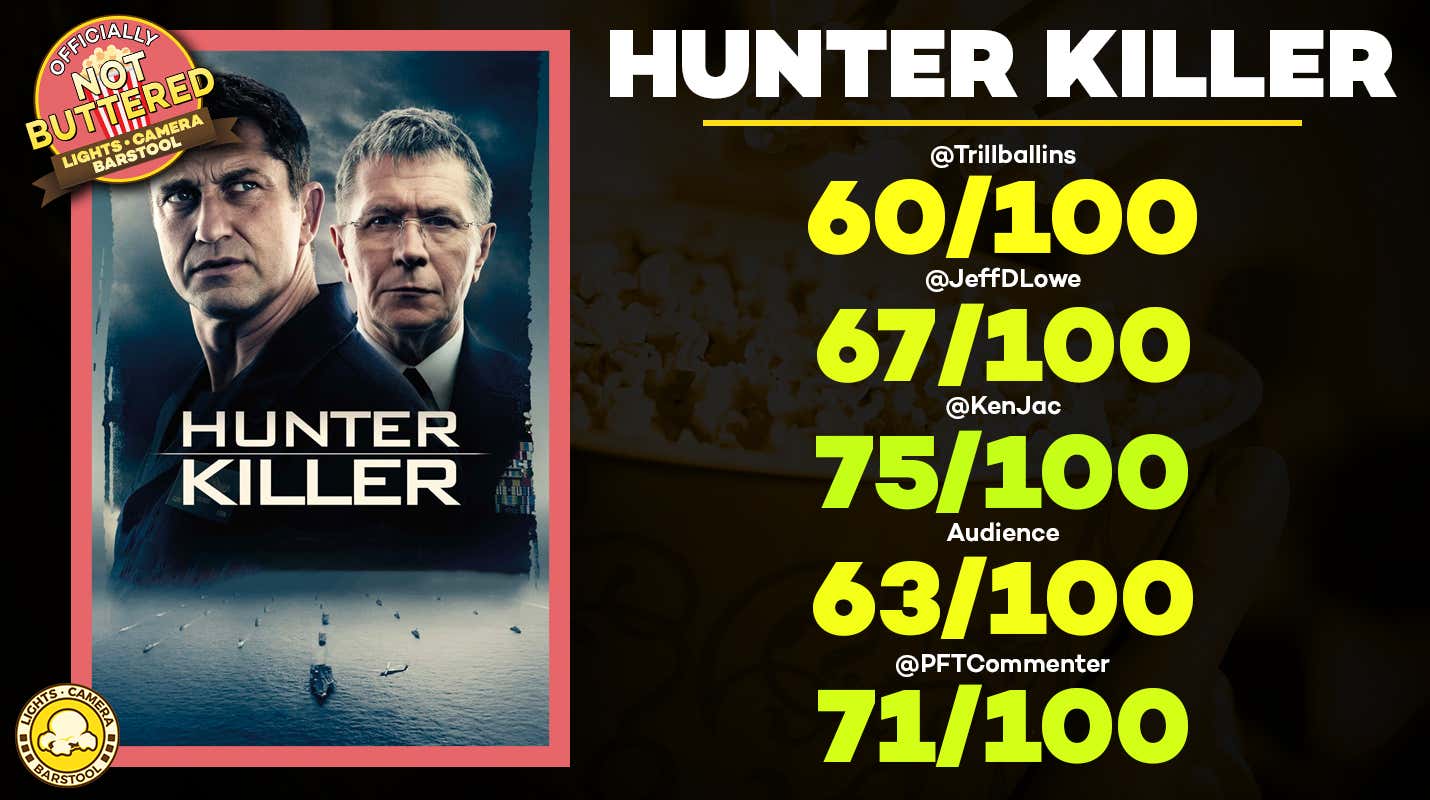 We saw the new Gerard Butler movie, ‘Hunter Killer’, and reviewed it. Bottom line: it’s a dad movie. Check out what we thought about the movie below, including a bonus ‘Apostle’ review…

‘Hunter Killer’ Synopsis: “American submarine Captain Joe Glass is on the hunt for a U.S. sub in distress in the Arctic Ocean. He soon learns that a secret Russian coup is in the offing, a conspiracy that threatens to dismantle the world order. With crew and country on the line, Glass must assemble an elite group of Navy SEALs to sneak through enemy waters, rescue the kidnapped Russian president and prevent World War III.”

Jeff (67/100): ‘Hunter Killer’ might be your average cookie-cutter action movie, but it’s a fun ride and solid throwback to 90’s movies of the same genre. A movie that didn’t seem to get any marketing play, the latest “Gerard Butler saves the day” entry is definitely worth the price of admission.

Right around this time last year, another Gerard Butler movie title ‘Geostorm’ was released in theaters. That movie found its way onto countless billboards, subway and cab ads and had a trailer before every single movie. Long story short, that movie really sucked and the promotional dollars for that movie should have been used for ‘Hunter Killer’. It isn’t a movie that will move the needle or have any sort of award buzz, but it knows what it is and pulls on all the right strings.

‘Hunter Killer’ is the definition of a dad movie. All dads across the world will see this on TNT or FX and buy in right from the jump. This is the [brand name redacted] of movies. Their slogan “Food You Can Fork” should be translated to “Movies You Can Fork” for ‘Hunter Killer’. The war scenes feel realistic enough to avoid it being overly corny, but it also doesn’t take itself too seriously at the same time.

The movie boasts a pretty solid cast, even if no performances stand out, with Gerard Butler, Gary Oldman, Linda Cardellini, and Common. They really sell Gary Oldman as a big part of this movie, but you only get him in a small dose. I am also on record as a huge Linda Cardellini stan and her presence in a lot of recent movies has been enjoyable.

Again, I will say it over and over, ‘Hunter Killer’ is a hell of a time but don’t expect it to change your life in any way. There are plenty of elements with this movie, including the story, script, and acting that will underwhelm you. But this movie achieves everything it is trying to be and then some, it may not be a masterpiece, but you should have a blast watching it.

KenJac (74/100): I appreciate the hell out of this no-nonsense action movie for knowing exactly what it was and not trying to be anything more than that. In modern movies, you get a lot of flicks in the genre that try to either break the mold or be really deep. You will have no such problems with ‘Hunter Killer’, though, as you get to turn off your brain and enjoy some surface level action scenes.

The main character is Gerard Butler’s Joe Glass. No, not that first-round matchup from Punch Out.

He’s the stereotypical, blue collar captain that takes no shit from anyone. Common, Linda Cardellini and Gary Oldman are all stateside NatSec/Navy personnel and have 15 or so minutes of total screen time, which is good! It leaves more time for decent CGI submarine fights. Also, some badass Navy SEAL vs. Spetsnaz battles led by Toby Stephens (aka Captain Flint from ‘Black Sails’) who does an Alabama accent for some reason, which is AWESOME. I enjoyed the pacing of the movie a lot as well, which felt super quick after the main plot gets rolling. At the end of the day, what more can you really ask for?

This felt like a Call of Duty: Modern Warfare campaign plot turned into a movie, and I mean that in the best possible way. If you like action movies, I don’t see why you wouldn’t enjoy this old-school, pure action movie.

‘Apostle’ Synopsis: London, 1905. Prodigal son Thomas Richardson has returned home, only to learn that his sister is being held for ransom by a religious cult. Determined to get her back at any cost, Thomas travels to the idyllic island where the cult lives. As Thomas infiltrates the island’s community, he learns that the corruption of mainland society that they claim to reject has infested the cult’s ranks nonetheless – and uncovers a secret more evil than he could have imagined.

KenJac (78/100): I’ll be the first to admit that I am the #1 Dan Stevens fan, so take heed when I say that ‘Apostle’ didn’t disappoint my relatively big standards. It’s a little bit fantasy, a little bit suspense and a little bit of a thriller. The one thing it is a whole lot of is GOOD.

Dan Stevens takes on the biggest load of the movie, followed by Michael Sheen and Mark Lewis Jones. Stevens plays an ex-priest who is out to rescue his sister from an early 20th century cult in Wales. Sheen and Jones are prophets and leaders of the cult that revolves around the mysterious island they live on. I loved Stevens freaky ass character and his struggle to remain hidden on the island. The soundtrack is perfectly haunting, combining with the cinematography to help complete its creepy vibe. I’ll say it’s a little slower than I would have liked, but once it gets going you remain hooked.

If you like director Gareth Evan’s stuff (The Raid 2, V/H/S/2) you will for sure enjoy ‘Apostle’ which is his best work, in my opinion. Also, one of the better originals Netflix has put out recently by a pretty decent margin.

—
This movie is Officially Buttered and just misses the mark with a 67/100 average. Make sure to subscribe to Lights, Camera, Barstool where we will review ‘Bohemian Rhapsody’ next week. We also reviewed ‘Hunter Killer’ in longer form on this week’s podcast with special guest PFT Commenter. Make sure to rate all 2018 movies below.