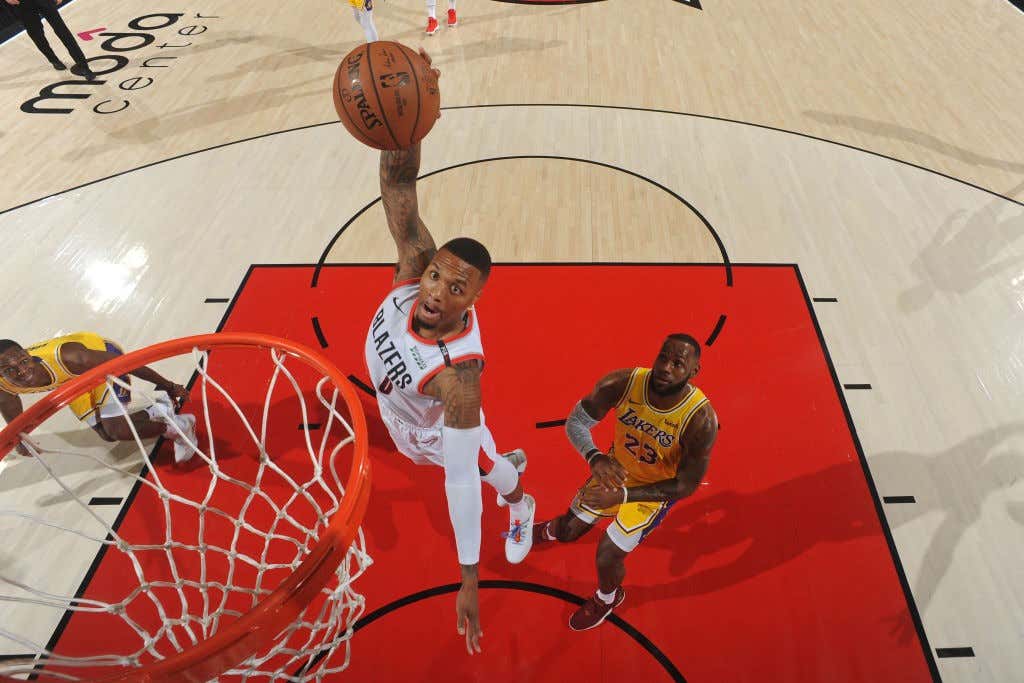 Frankly, I don’t know what Damian Lillard has to do. Play at an All Star Level? Check. Carry his team to the top tier of the brutal West? Check. Be one of the deadliest clutch time players in the NBA? Check. Put out absolute fire hip hop albums? Check. And yet, you ask any Portland fan and they’ll tell you, the rest of the basketball world continues to sleep on Dame as a player. Maybe it’s because he plays in a part of the country that you have to stay up late to watch, but this blog is for all of the Blazers fans out there that are frustrated that despite his incredible start to the year, nobody is mentioning him in the MVP conversation. I want you to know I see what he’s doing and I am going to do my part to share it with the masses. Will he win MVP? No, most likely not, but that in no way takes away from the MVP caliber start Dame has had to his season. See for yourself

Pretty good right? You bet your ass it is. Just how rare is this start for Dame? Let me put this in perspective for you. In NBA history, guess which player has had this sort of production. Go ahead, try. I’ll tell you. It was Steph Curry in 2015-16, you know, the year he won the unanimous MVP.

It’s true, he had a pretty rough playoff series against the Pelicans last year, maybe that’s why he isn’t getting the love that all of the other early MVP candidates are getting. He struggled with 18.5/4.5/4.8 with 35/30% splits in that series. Perhaps people are treating him like Kyle Lowry or something, a player who is legit in the regular season but disappears in the playoffs. That would be pretty wild considering for his career hs is a 23.9/4.5/5.6 player in the postseason. This is not a case of Dame never showing up when it matters most, so I reject that claim.

When it comes to clutch time basketball, there are few more deadly than Dame. So far this year he’s 7th in crunch time points, upping his total from 3.3 last year to 4.5 this year. When you expand it to fourth quarter scoring, he’s tied for 8th at 8.0 points, just trailing guys like Lebron who is at 8.3. Last year he was 10th in fourth quarter scoring at 6.6. At the moment Basketball Reference has him at a 133 Ortg so far this year which is utterly ridiculous. While it’s true he still has room to grow on the defensive end, I would say over the last two or so years he’s trending in the right direction.

Not getting any respect is nothing new for Dame, it’s been happening his whole career. Just look at the All Star Game history. He made it last year because everyone was hurt and had a nice 21 point performance. Before that he missed it the previous two seasons despite averaging 25 and 27 points a night. It makes no sense. When asked about it last January, he had this to say

“I’ve gotten frustrated just for the fact that it feels like I always got to be the fall guy and every other guy has been deserving,” Lillard tells ESPN. “In the past, the thing has been, ‘All right, my team has been 10 games under .500 or not in the playoffs,’ but every year we’ve found a way to be in the postseason, and this year I think we’re in much better position than we have been in the past two seasons that I didn’t make it. I think I’ve gotten over the emotional part of it the last few times that I didn’t make it. Now I’m kind of like expecting it to go that way, but I feel like I should be there.”

I’m not even a Blazers fan and I find this pretty ridiculous. It’s almost at the point where there isn’t all that much more Dame can do. He’s had the individual success and done things that are extremely rare in NBA history. He’s had the team success and is already backing it up this season as the Blazers are off to a 6-2 start. There is no reason why he should not be in the discussion when talking about early MVPs, because when you look at it he checks all the same boxes those other guys have. I know West Coast fans talk about an East Coast or big market media bias, and thats’s really the only thing I can think of. There is no excuse to keep ignoring the quality of play Lillard is putting up in POR, and I think it’s fair to say if a handful of other guards have had his sort of start, it’s all we would hear about.

So let this be your official notice that if you haven’t been, you need to start watching Damian Lillard play. Just look at what he’s done so far in October, and start giving this man the respect he deserves