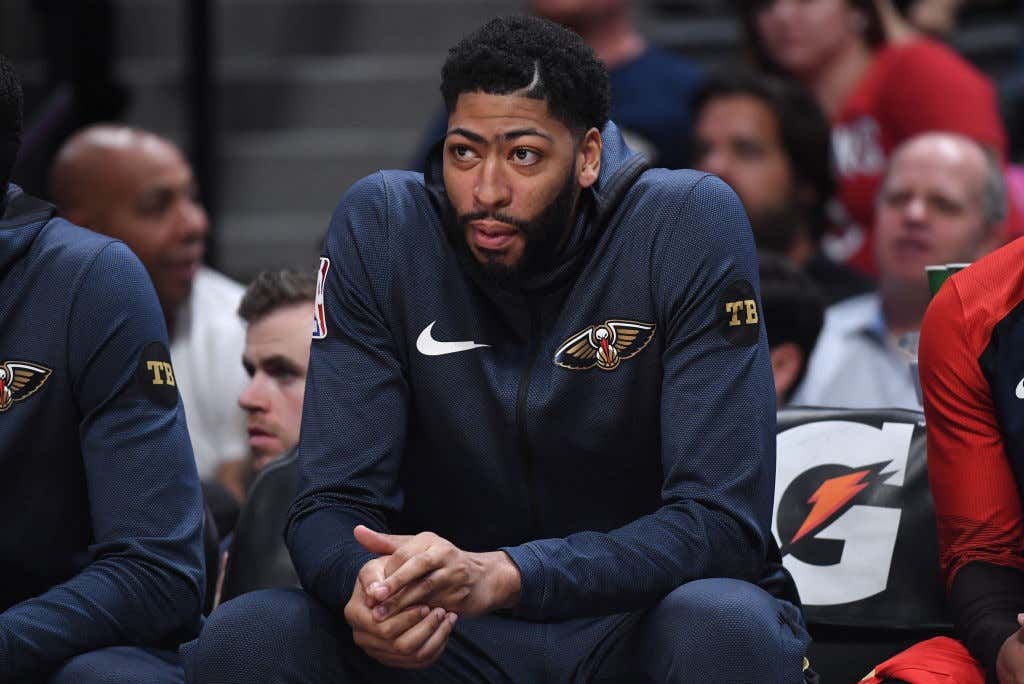 Damian Jones, the Warriors’ 23-year-old starting center, was in single coverage on the five-time All-Star. Davis received the ball near the left block and then faced up the big man. He drove hard to his right and made contact with Jones, knocking the young prospect off balance. Davis now had an easy short floater in the paint, a shot he routinely converts.

But this time, there was too much push on the shot and it clanked off the side of the rim farthest from him. His night was much of the same, mainly due to working himself back into the fold after missing the previous two games with a right elbow sprain.

For most players, a stat line of 17 points, 12 rebounds, seven assists and a block is a career evening. But for Davis, who was 6-of-16 from the field in a 10-point loss to the defending champs, it’s viewed simply as not enough and that responsibility comes with immense pressure.

“Of course, I know that in order to win games, a lot of pressure is going to be on me,” Davis told Yahoo Sports while sitting at his locker stall Wednesday night. “If we lose, it’s on me. If we win, they give my team the credit and I’m fine with that.

“A perfect example [was against the Warriors]. I don’t have a good game and we lose. So, I got to play almost perfect every night to give us a chance to win. But my teammates do a great job. Even the games I didn’t play, those guys have been battling night in and night out to get victories. … I don’t try to put too much pressure on myself, but I know it’s there.”

“Life isn’t fair,” Davis told Yahoo Sports with a smirk. “We can’t control what happens in the league. I just go out there and play. It’s nothing I can do. It is what it is at this point. I just got to go out there and trust my teammates, which I do. Those guys are great players, good defenders, good role players. They do as much as possible to help me.”

But most of all, Davis just wants to win.

That’s why rival NBA executives are of the belief that Davis could be up for grabs for a large-market organization well before he is expected to opt out of his contract in 2020. He is eligible for a super-max extension with the Pelicans in July 2019 that is worth $235 million for five years.

If Davis were to pass on such a massive deal, as some executives believe he could, the franchise would be forced to contemplate trading its cornerstone. Nevertheless, Davis said he’ll concern himself with contractual matters in the summer.

If you had November 2nd as the date where we would get our first Anthony Davis piece that people will for sure overreact to, come on down and collect your prize. Honestly it has to be so exhausting to be Anthony Davis when you think about it. Here he is, a clear Top 5 maybe even Top 3 player in the NBA, and in order for him to even sniff the playoffs he basically has to be perfect. Given the conference that he plays in there is no taking a night off (something he was criticized for in 2015), and the reality is he can’t even have an off night if his team wants to win. Think of the players that are in that same tier as him, they don’t have nearly the same pressure night in and night out. If Durant has a bad game guess what it doesn’t matter, if LeBron does who cares this year isn’t about winning anyway. Kawhi can rest or have a bad game and the Raptors have the depth and conference to withstand it. At some point that has to break you right? I truly believe AD wants to stay in NO and wants things to work there. At the same time I also think he looks around the league and probably thinks about how he’s sort of wasting his prime years for a team that may never get over the hump.

This ism’t to say the Pelicans don’t have good players, they for sure do. Jrue Holiday has been great, Mirotic is a perfect stretch four in today’s NBA, and Julius Randle looks like a monster. The problem is they can’t keep this team together for that much longer. Mirotic is going to have a HUGE market this summer, and unfortunately because they don’t have Bird Rights on Randle they are going to have to use their cap space to sign him this summer. This team could look drastically different this time next year, and that has to weigh on Davis. In the piece he of course says all the right things

“I really don’t listen to [the noise] to be honest,” he told Yahoo Sports. “I hear it from everywhere from social media, to people around you. But my biggest thing is focusing on playing basketball. That’s all I can do. I can’t do nothing else but play basketball to the best of my ability to help my team. … We have one goal and that’s winning a championship, and my job is to try to help them reach that goal.”

And no, this story didn’t give us any new information but I don’t think it’s something you can ignore. It’s way too early in the year for AD to start leaking things to the media to help shape a narrative, so the timing is a little confusing to me. The facts are the Pelicans have lost 4 in a row, all against playoff teams in the West, and it wouldn’t shock me if that was frustrating AD. He’s only 25 but has a legit injury history, so it makes you think how much he is willing to put his body through in order to carry this team if they truly can’t get over the hump.

Sadly, this is something that’s going to be brought up whenever the Pelicans hit a snag like they have at the moment. It’s not fair, but it’s the reality. Teams around the league are foaming at the mouth at the potential that after this season AD will demand his trade and then all hell will break loose. In my opinion I feel like NO has to win 50 games and make the WCF for him to be convinced it’s worth spending his prime on this team, and if they somehow end up as the 8th seed, they will not beat the Warriors in the first round. That’s why even though Davis had multiple years left on his deal, there is so much pressure this season for them to show last year was not a fluke but rather a stepping stone.

Because at some point AD is going to be fed up with the fact that his Top 3 player production isn’t getting it done, and then the next thing you know the Pelicans are forced to trade a generational talent and it could be decades before they ever get back to where they are now, which is still a team with a ways to go,