Cavemen originally invented fire because it was necessary for them to use the flame to heat things up. That was thousands of years ago. But still to this day, things get a little *heated* when the FLAMES are involved. LMAO, do you guys get it? Pretty decent lede if you ask me.

But yeah, anyways….we had a little olde time hockey last night in Calgary after Noah Hanifin set Mark Jankowski up with a nice little hospital pass and Ian Cole was the ambulance. Here’s the hit in real time which looks perfectly clean to me.

And here’s the hit slowed down a little and from different angles.

I think the most telling part of that replay is watch Noah Hanifin at the end here scream “FUCK” to himself. He knows that he set his boy up to get bundled. He knows that was a suicide pass and he knows it’s his fault that Ian Cole ran over Jankowski like a freight train. But the most important thing to keep in mind here besides the fact that Hanifin knows that he’s the guilty party, is that Ian Cole never targeted the head, he went straight shoulder to chest, and his feet stayed on the ground until post-impact. If Ian Cole was a scumbag like some other players in the league who are currently serving 20-game suspensions, Cole would have attempted to disguise this hit as a shoulder-to-shoulder but then would have rode the hit up and finished it through Jankowski’s jaw. As far as massively violent hits go in the NHL, that’s about as clean as they come. But Sam Bennett still wanted to chuck some knucks after the fact and that’s perfectly fine. If you want to stick up for your teammate after he just got lit up, then by all means go right ahead. That just means that Bennett is a good teammate.

Ian Cole shouldn’t have to serve 5 minutes in the box for fighting because players feel the need to drop the gloves after every big hit these days regardless of if the hit is clean or not. I know that’s why the league implemented the instigator rule for moments like this, but it’s still bullshit for Ian Cole. He doesn’t have any other choice but to fight there. Giving him 5 for fighting for a fight that he really had no say in just doesn’t make sense. And not only did Cole get 5 for fighting, but here is the entire rundown of penalties after that ordeal. 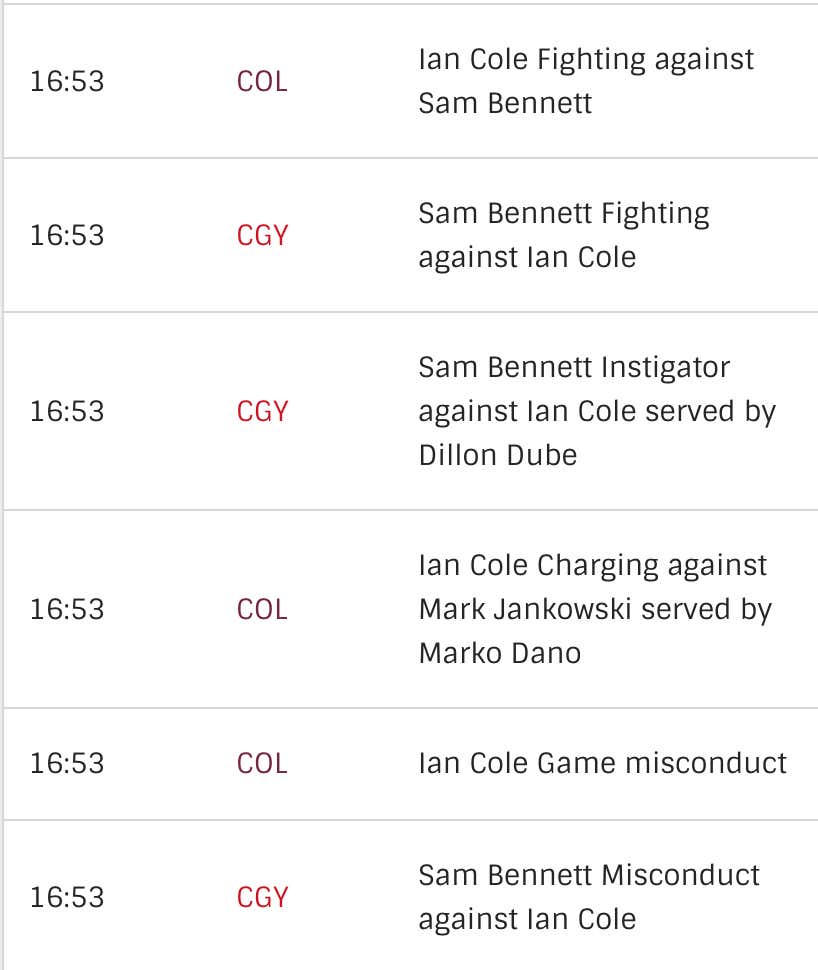 So he gets 2 minutes for charging on the initial hit which… I mean… I don’t know, man. I get it. He traveled some distance to deliver that hit and if you really wanted to give the guy 2 minutes for that, I think it’s a soft call but I won’t argue. So he gets a soft 2 minutes for charging. 5 minutes for fighting even though Sam Bennett left him with no other option. And then a GAME MISCONDUCT ON TOP OF ALL OF THAT? Are you fucking kidding me? Where in the world is that game misconduct coming from? I get that it’s a violent looking hit but you can’t kick Ian Cole out of the game because Noah Hanifin set Jankowski up with a buddy pass. If Ian Cole gets a game misconduct for that, then Hanifin should get a penalty too because that is borderline entrapment.

Either way, I think it’s time for the NHL to start looking into incidents like this. Because I’m sick and tired of seeing guys fight after every big, clean hit. And if they’re not going to stop fighting after big, clean hits, then you have to stop penalizing guys for fighting when they have done nothing wrong besides play a physical game. Sorry for making so much sense.