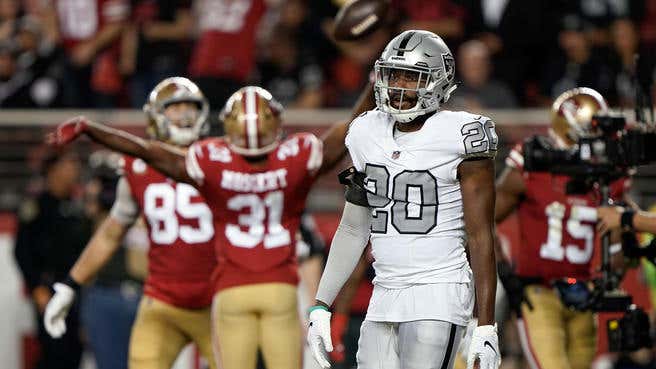 This was an ugly, UGLY 34-3 loss to San Fran that was terrible in that it was an embarrassing way to lose the final Battle of the Bay, but good in that it helped put them in the co-lead for the #1 overall pick this year. 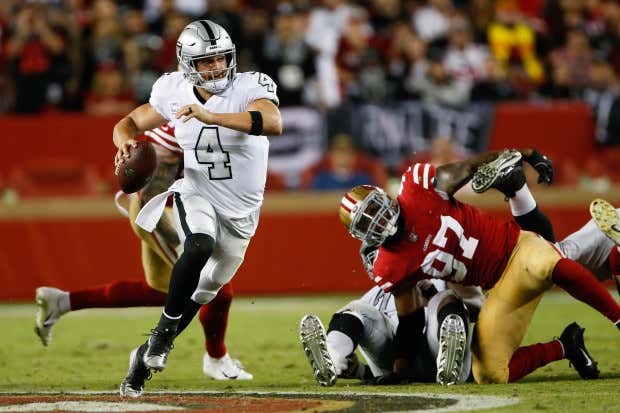 On offense, Derek Carr was outdueled all game by the #4 on the other team, Nick Mullens. No, not the guy from Cumtown. Speaking of which, Carr was cumming off a strong performance last week where he found the end zone 4 times. No such luck this week, though, as he went 16/21 for no scores, getting sacked 7 times in the process. Kolton Miller re-injured his knee in the first half and didn’t return, leading to Kelechi Osemele replacing him only to immediately give up a sack. Miller was great to start the year and taped off a ton the last few weeks, so I’m almost happier to see that it might just be the product of an injury rather than overall skill. Doug Martin took a majority of the carries once again, gaining 49 yards on 11 attempts. Jalen Richard lead the receiving core with 4 catches for 45 yards. You might be thinking “Hey isn’t Jalen Richard a RB?” Correct!

The defense, as you might imagine by the score, was abysmal. No sacks on the night, only 2 hits and 2 passes defended. Tahir Whitehead lead the team with 7 tackles and 3 TFL, but also let fucking Nick Mullens lead him with his eyes into the wrong passing lane, leading to a touchdown. Reggie Nelson is the obvious pariah of the night, giving up the opening touchdown by making the worst read of all time.

Takeaways: There’s no point in getting pissed or analytical about guys like Reggie Nelson or Doug Martin since they won’t be around much longer, but the poor play from the younger guys like Miller is concerning. The offensive line is currently in shambles between Miller’s injury and T.J. Clemmons being moved to the I.R. It would never happen, but I might even consider putting in McCarron vs the Chargers next week, where they will have the recently signed T David Sharpe possibly starting with Jon Feliciano vs Melvin Ingram and maybe the first game back for Joey Bosa. That is a recipe for a 10 sack game if I’ve ever seen one. The most positive takeaway from this game: Draft picks baby!

Don’t forget to subscribe to Lights, Camera, Pod, follow us on Twitter, follow us on Instagram and join in on the conversation on our Reddit. And vote in my totally normal 51-Week Study on the best movies from each state. Iowa is up this up this week, so go vote and if the embedded form doesn’t work, click here. Also, vote for the AFC West ultimate teams.