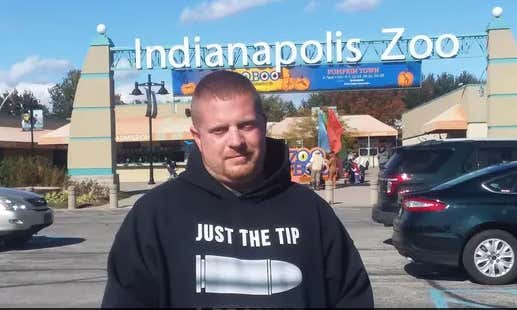 [Cincinnati] – “I never found anyone who took offense to that hoodie,” Edmonson said. “I wear that hoodie on a daily basis. One hundred percent of the time, most people think it’s a hilarious joke. Somebody probably didn’t understand that it was a picture of a bullet. That, or they’re very anti-gun.”

“They said they got a complaint about my shirt and asked me to remove it and I refused,” Edmonson said. “Because it was my First Amendment right for freedom of speech.”

Classic mix up at the Indianapolis Zoo. I mean, how is everyone there supposed to know this is just a gun joke and not a sexual innuendo joke? That doesn’t look like a penis one bit. I mean it doesn’t even have balls.

I always laugh when I see these type of stories. Everyone screaming first amendment for the right to wear something like this. How about just dress normal? This shirt sucks, much like the majority of stuff. But, what can you expect when you go to the zoo. Going to the zoo stinks. You just stare at animals in cages. That’s not fun. I don’t want to do that. Plus, everyone goes to the same animals. Oh, look the gorilla is sleeping. The elephant is walking around. The lion is laying there. Same thing every time. Shout out for just being part of @barstoolindoors team.

Now, back to this sweatshirt. Yes, this does look like the shirt that would get someone kicked out. Think about who is at the zoo. It’s mostly just kids. Let’s think about our surroundings one time and have some self awareness. Don’t wear just the tip shirts with a bullet penis. Just wear a regular hoodie.