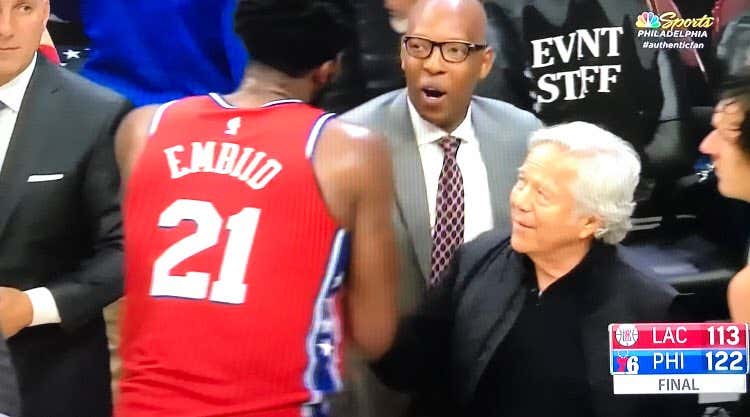 So Bobby Kraft was sitting courtside at the Wells Fargo Center last night. Why? Well because he’s buddies with Michael Rubin but also because Robert Kraft is a man who can appreciate excellence. He’s cultivated excellence (aside from Super Bowl LII) with the New England Patriots and created one of the best dynasties the NFL has ever seen. Successful people like Robert Kraft love to surround themselves with other successful people, which is why Robby K wanted to watch the future NBA MVP do his thing up close and in person.

Just take a gander at the way Kraft Singles is looking at Embiid right there. That’s a face that says “holy shit, this guy is special”. You’d think that over time, Mr. Kraft would become a little desensitized to getting starstruck around professional athletes. I mean he’s been around some of the all time greats. Yet he still can’t get his eyes off of JoJo. And can you blame the guy? Just look at the performance he got to witness.

He could have easily gotten to 50 at the end of the game if he wasn’t such a selfless guy and constantly putting the team ahead of his own personal accolades. 41 points. 12 blocks. Had Gortat with 4 fouls before the end of the 1st half. Pure dominance from start to finish. I’m surprised Mr. Kraft didn’t leave the Wells Fargo Center with an Embiid jersey on last night. Maybe he snagged one on the way out of the building and he just didn’t want to get caught wearing it on tv.

By the way–is there a bigger Philly guy than Robert Kraft? Sixers fan. Meek fan. Always wearing sneakers even if it’s with a suit. I wouldn’t be surprised to see Robert Kraft walking down Passyunk Ave. shirtless with a giant Philly sports 4-for-4 tattoo on his back. Love that guy. He’s one of us.