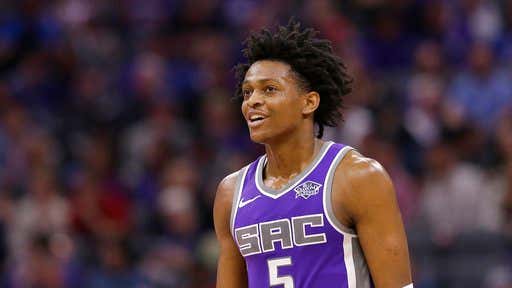 Good morning everybody, happy Friday! Welcome back to  another edition of Last Night In The NBA where we catch you up on everything that went down from the night before in the Association. We had 6 games on the schedule last night, and while they weren’t all down to the wire like Wednesday’s games they were still loaded with historic performances. That’s just what you get nowadays when you watch the NBA you never know where it’s coming from but each and every night there is some sort of record broken or some sort of performance that hasn’t been done in decades. Listen I know you don’t want to do shit this morning, so I’ll just get right to it. If you were doing something stupid like watching SF/OAK or something and missed the basketball, here’s what happened

As usual we’ll have a full Celtics breakdown in a bit, so let’s focus on the previously undefeated Bucks. This was the return of Giannis and frankly he looked about as good as ever

But outside of him, the Bucks had issues everywhere. First off, for a team that is the best three point shooting team in the league, they were held to just 9-29 shooting from deep. Khris Middleton, a guy who basically hasn’t missed all season went 6-18, and Eric Bledsoe, who has his own demons with this team went an unfortunate 3-9, and missed one of his FTs that would have tied it with like 12 seconds left. A good measuring stick game for both teams, the Bucks walk away with not only their first loss, but the realization that maybe they still have a ways to go before they pass BOS in the East.

Giannis is a monster though. Nobody can stop that guy.

Don’t look now but it looks like the Thunder are starting to figure things out. In a battle of two great point guard, thins certainly lived up to the hype, especially with Westbrook who threw up a nice 29/8/10 on 12-24 shooting.

The best part of his night HAS to be busting out the shammgod to win the game, which is one of my all time favorite basketball moves. Just so disrespectful

Poor Cody Zeller. He didn’t know what the fuck just hit him and next thing he knew the game was over. A lethal move that when pulled off smoothly is legit unguardable. Great awareness by Westbrook to go with it in that moment when matched up with a big who had no chance of staying with him.

The Thunder have now won 3 in a row and face the disaster Wizards next. My bet is it keeps going.

For CHA, Kemba was pretty much Kemba, and they did get a nice night from Malik Monk off the bench

But this is the inconsistency that is going to give them trouble during the year. It feels like all their games have come down to like one or two possessions, and this was just a night where they couldn’t really make a shot. Just 40/26% splits for the night and Kemba going 7-16 doesn’t help, it feels like the Hornets should be better than their record indicates. But giving up a 38 point fourth quarter at home is usually going to come back to bite you, just like it did here.

They struggled against the Bulls, but the Nuggets looked much better against this bottom of the league team. It didn’t start out that way though, as they found themselves in a quick 27-15 hole after the first quarter. Thankfully a 35-15 second restored order, and from there the Nuggets never really looked back

On a night where their starters had an off night, it was Juancho that led the way off the bench with 23 points on 6-10 shooting including 5 3PM (!!!). As a team Denver finished with 48/38% splits and just 12 TOs which is usually a recipe for success. Also playing the Cavs helps when you have an off night because they stink.

For CLE, I mean no starter over 13 points, 5-18 from deep, now 1-4 at home, things aren’t great. But we knew that going in so here’s Larry Drew trying to spinzone

If the Sixers can just figure out a way for the league to allow them to only play at home, they may never lose. So much better in this building, it’s the only place they’ve won, the Sixers came out and did not disappoint.

At this point is it fair to say that maybe outside of Al Horford there is not a big in the NBA that can handle Embiid? I mean the tear he has been on to start this season is utterly ridiculous

I don’t care if you hate the Sixers, you give that man some respect. Those numbers are insane, and it’s also important to notice that he’s playing in every game. That’s huge. But this was also one of the best all around performances from Fultz as well, who finished with 5-10 shooting and a team best +16. He played just 21 minutes which was weird considering he wasn’t in foul trouble and was playing well, but this was definitely a step in the right direction for him as well.

Now giving up 113 points is a problem, but the Sixers did a good job defending the three point line, and even though they almost blew their giant lead, they punched back and eventually closed it out with a strong fourth quarter. Now let’s just see them do this on the road for once.

For LAC, battling uphill the entire night, they really only had Gallo and Harris show up amongst the starters

But as is the case with the Clippers, they struggled to make threes and their defense stunk. Now 1-3 on the road this season, they are similar to the Sixers in that so far they’ve only shown they can play well at home. That has to be figured out moving forward if they want to crack the playoffs.

GO BABY KINGS GO!!! Are they for real? I know this was the Hawks but they just dropped 146 in regulation. What even is that?!??!

It’s hard to find someone who didn’t have an awesome night, but the story here was clearly Fox. What a performance, some might say it was rather historic

The Kings have to be the biggest surprise of the season so far, and it’s because they have this collection of young talent that is starting to figure things out in this league. They still have miles to do, but you can no longer say this is the worst team in the league. I knew it was right to believe in them when my head told me not to, and now look at them. Incredible.

For ATL, yeah that’s a disaster, but at least Trae Young did Trae Young things

Uh oh, suddenly the Pelicans have lost 4 in a row. All against good teams too in UTA/GS/DEN/POR. Maybe their 4-0 start, which was against poo poo teams was a bit misleading. Now to be fair, Anthony Davis didn’t play and that’s obviously important, but they shot like shit, and defended even worse

The offense still rolled because this team can score, but not having AD to anchor that defense was clearly an issue. Hopefully his elbow injury isn’t something serious, because it’s clear they need him.

For POR, look 6-2 is 6-2 and despite people thinking they were going to regress, the Blazers have come out and looked fantastic

They finished with 50/51% splits and 18 3PM, while also taking 31 FTs. It’s nearly impossible to lose when you pull that off. Four straight quarters scoring at least 30 points will do that, and this team had 70 at the half. Just a dominant offensive performance from everyone involved.

And that’s it! You’re now caught up on everything that happened last night in the NBA. As usual go live your life tonight and don’t worry about watching the games, just check back in tomorrow morning and I’ll bring you up to speed on what you missed.