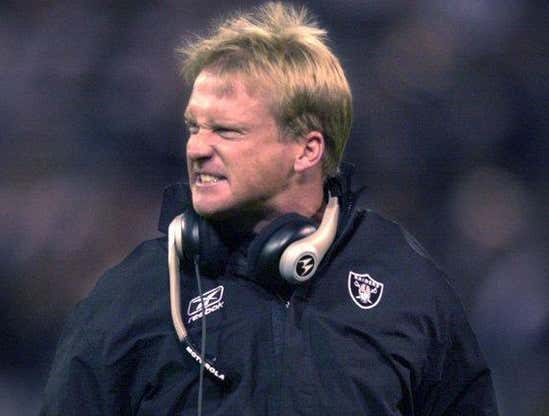 Going into this season, I went on record as saying the story line I was most looking forward to was the inevitable trainwreck of Jon Gruden’s return to the sidelines. And yet, as much as I had anticipated it, as high as my expectations were, it has delivered so, so much more. It’s trainwreck alright. But a trainwreck played out in slow motion, with the engine in flames and the brakes not working, as it hurtles relentlessly toward a gorge where the bridge is out.

Every time you think Gruden has hit rock bottom, he and his team start drilling down. Consider this magical moment last night when he lit into his defensive coordinator:

Way to project an air of confidence through the use of body language positivity.

Though in Gruden’s defense, he was not wrong. Those 31 points (eventually 34) were dropped on them by Nick Mullens, an undrafted rookie playing in his first game who didn’t even have a Twitter blue check mark going into last night. And all he did to Oakland was have the highest passer rating for a debut in NFL history (h/t Pro Football Talk):

The problem with Gruden giving Paul Guenther the Atomic Eyeroll there is something Mrs. Driscoll used to drill into my 9th grade head when she wasn’t droning on about onomatopoeias and gerundial phrases. Which was “When you point your finger at someone, three fingers are pointing back at you.” (I’ll pause here while you try it. It’s amazing, amirite?) He traded away Guenther’s cornerstone defensive player for a stack of expired pizza coupons. The offense he was supposed to bring his early 2000s era genius to was in the process of scoring 3 points, producing 242 yards of total offense and taking 8 quarterback sacks. The Raiders are currently 27th in the league in points, and 11 of the teams ahead of them have played one game less. And after the game Raiders players were answering questions about whether or not they quit. (Though on a positive note, at least Derek Carr didn’t get accused of crying. So they got that going for them. Which is nice.)

And just to make matters worse, he has twice this week said he’s heard from players on other teams who are “dying” to come play for him. Which is either complete bullshit or a violation of tampering rules, and I’m not sure which is worse. Making up phantom phone calls is one thing. But if you’re contacted by a guy under contract to another team, you’re supposed to immediately report it. If not (another h/t to PFT), the league can step in and demand Gruden hand over his cell and phone records.

So yeah, Gruden’s return has been everything I’d hoped it would be and much, much more. And for all of it, probably nothing has been worse than letting Cassius Marsh have this level of Cassius Marsh-type fun, the way Cassius Marsh likes having fun the most: On a 2-7 team:

Welcome back, Jon Gruden. Here’s hoping this lasts another 10 years.