When the #1 ranked Alabama Crimson Tide visit the #4 ranked LSU Tigers on Saturday night, major playoff implications will be on the line. For Alabama, a victory in Baton Rouge would all but guarantee them a spot in the SEC Championship game. For the Tigers, a loss would all but knock them out of playoff contention, but a win would propel them to a position to control their own destiny. While the always credible FiveThirtyEight predictor tells me that this single game may be the biggest decider of how the playoff shakes out this year, it is in no way, shape, or form the biggest game these two teams have ever played. Let’s take a stroll down memory lane and remember the 2011 version of the Alabama / LSU rivalry, which was dubbed “The Game of the Century”. 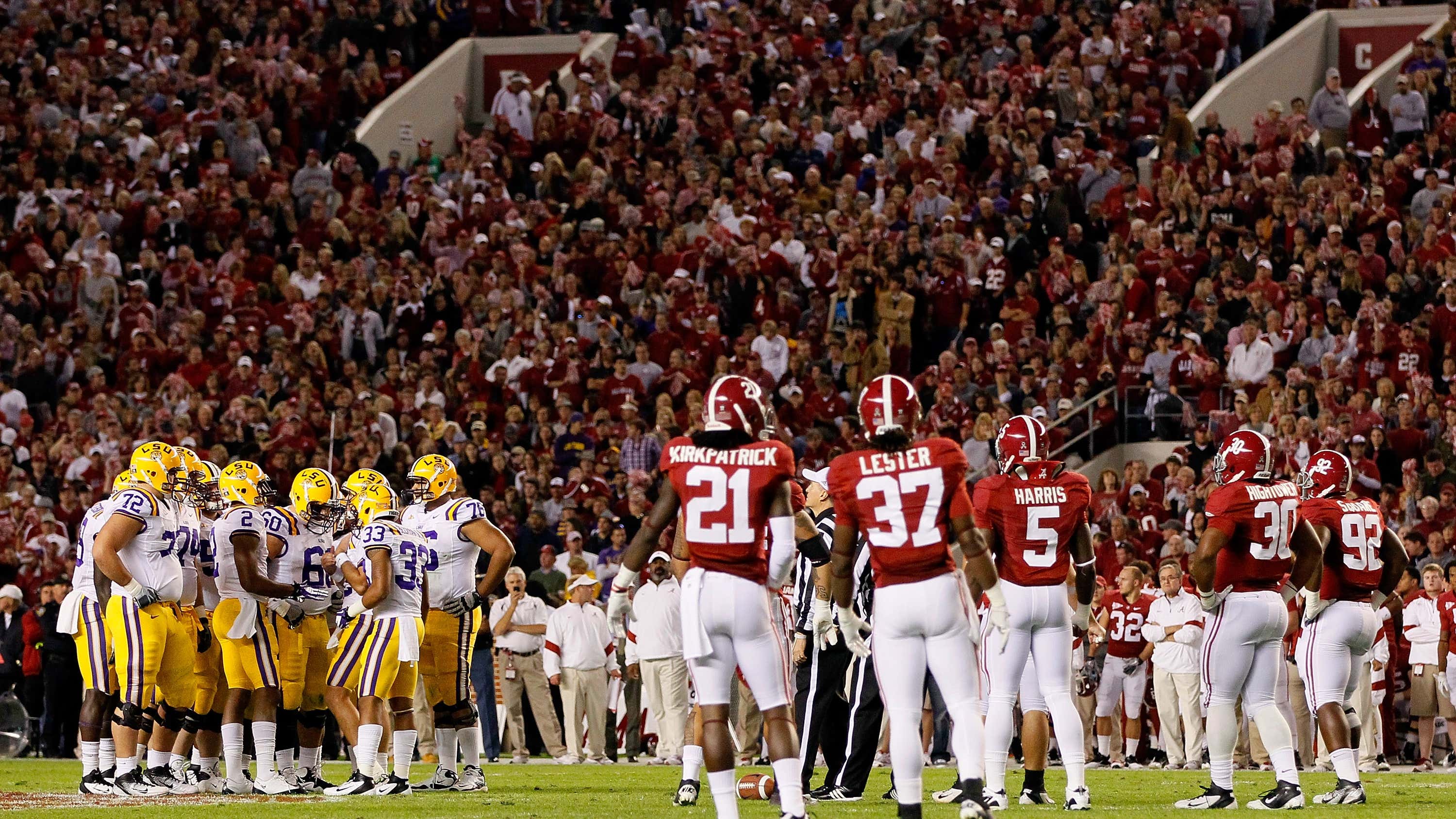 I can’t ever remember so much hype surrounding a regular season football game in my lifetime than the build-up leading into the 2011 Alabama/LSU game. When former LSU coach Nick Saban accepted the head coaching job in Tuscaloosa in 2007, this game became the premier rivalry on each others schedules, and it became a premier game to circle on your calendars for sports fans throughout the country. In 2011, the appeal of the game magnified by 100. Heading into the season, both Alabama and LSU were ranked in the Top 5 nationally. Bama was #2, and LSU was #4. For the first 8 weeks of the season, there were no more dominate teams than these two. Alabama traveled to Penn State to beat a ranked Nittany Lions team in Week 2 (wow, I wish SEC teams still came North to play sometimes), defeated two consecutive ranked SEC opponents in Weeks 4 and 5 (#14 Arkansas and #12 Florida), and dominated Tennessee 52-7 before heading into their bye week ranked #2. As good as Alabama seemed, LSU seemed even better. In Week 1, the #4 Tigers convincingly defeated the #3 ranked Oregon Ducks in the Cowboys Classic, holding that high-powered rushing attack to under 100 yards. From there, they took down notable teams such as Mississippi State, West Virginia in Morgantown, Florida, and Tennessee. When Texas Tech knocked off Landry Jones, Kenny Stills, and the #1 rated Oklahoma Sooners in Week 7, LSU took over as the top ranked team in the country. Following a 45-10 home victory over #19 Auburn the next week, they headed into their bye looking forward to a #1 vs #2 matchup with the Alabama Crimson Tide. The hype could not have been greater. 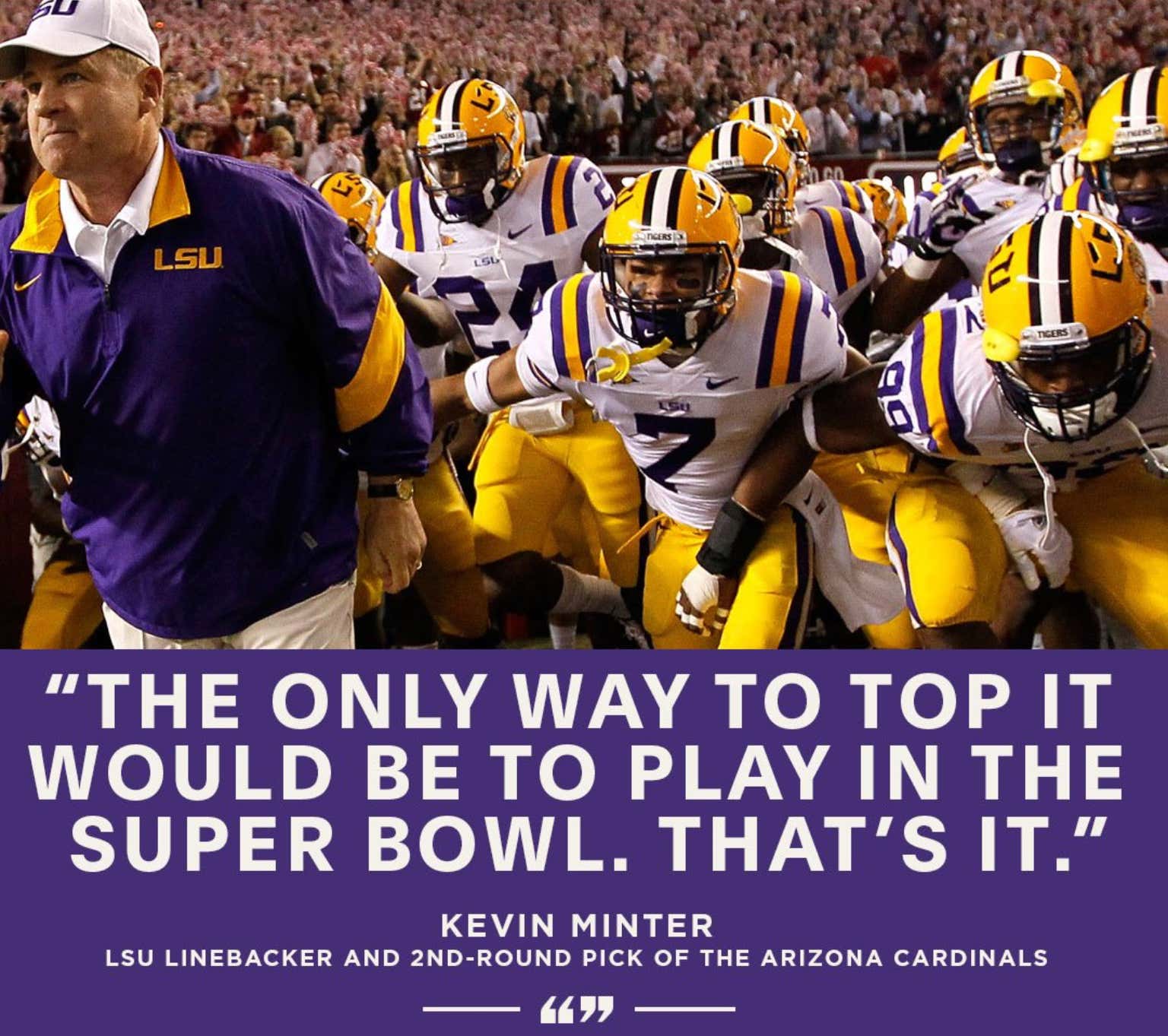 With this game occurring during the BCS Era, many were calling it the de facto National Championship. Both teams were clearly head and shoulders above all of the other schools in the country talent-wise, but with the way the BCS worked, it would be very difficult to see a rematch just a couple weeks later. With that being said, CBS decided to bump the game from it’s original 3:30 pm start time to become a prime time game, with kickoff scheduled for 8:30 on the biggest stage. An estimated 20 million people tuned into the game, making it the highest rated non-bowl, college football telecast in 20+ years. Now, depending on who you ask, the game either completely lived up to the hype, or the game was hilarious. I tend to fall towards the latter because of the 9-6 final score. There is no denying that these two teams were the best two in the country, but the way the game shook out when they met had very little entertainment value, unless you love field goals, both makes and misses. 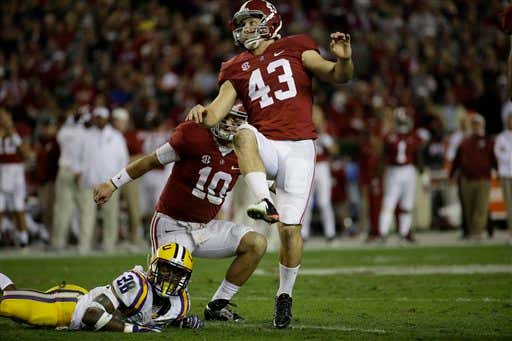 In the first quarter, Alabama took the opening kickoff and marched right down the field until their drive stalled at the LSU 27. Kicker Cade Foster missed a 44-yard field goal wide right, and the theme of the game was officially set. The very next drive Foster missed another field goal from 50-yards. This dude seems like a perfect fit for the Cleveland Browns. Anyways, the rest of the quarter featured LSU throwing an interception, and some good old fashioned punting. Remember Brad Wing from LSU? That little Aussie could boot the football. 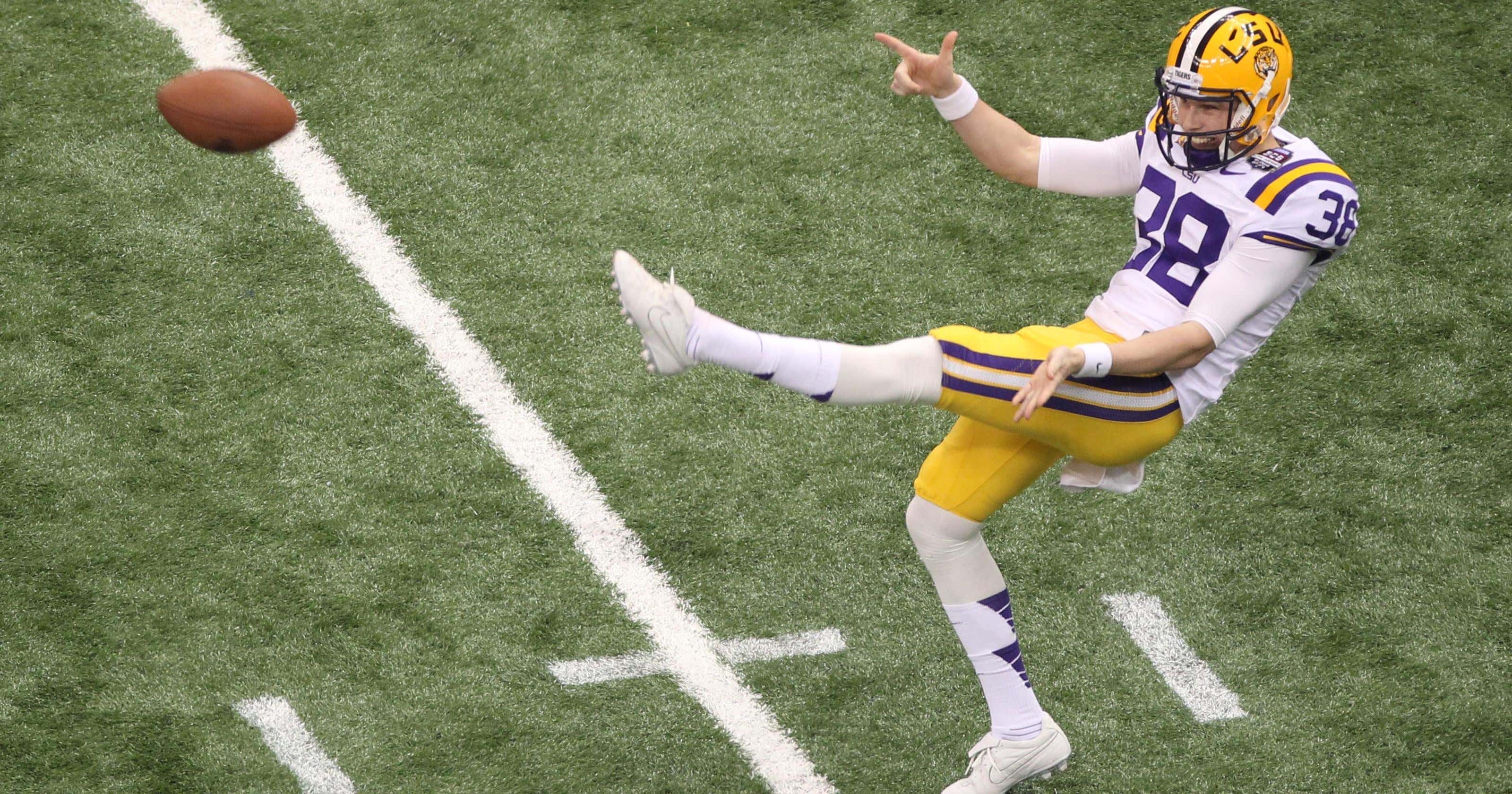 Following the interception, Alabama opened the 2nd quarter at the 47 yard line in their third offensive series of the game. They managed to get in range for another field goal try, but you know how that was going for them. This time, instead of missing a 3rd consecutive field goal, the Tigers just blocked Alabama’s kick instead. Eric Reid brought the blocked kick out the 48 yard line, but the LSU offense was forced to punt yet again. Folks, the game was tied 0-0 with 3 missed field goals and a couple Australian punts. Anyone that says it was a good game at this point is 100% wrong. The next possession for Alabama led them all the way down to the LSU 19 yard line, aided by a 39 yard pass from AJ McCarron to Trent Richardson. After the offense couldn’t muster a touchdown, the Tide trotted out a new kicker to try a 34-yarder. And you guys, it was good!!! 3-0 Crimson Tide!

The two teams played scoreless for the rest of the quarter until LSU knocked a short field goal through as time expired, and the two teams headed into half in a 3-3 tie. 2 made field goals. 3 missed field goals. 0 touchdowns. 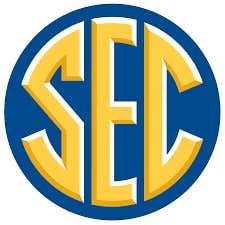 The second half is where the scoring really picked up. Alabama brought back out their first kicker and he knocked through 46-yarder, after a LSU interception put the Tide on the 35 yard line to start. The Tide gained 6 yards on 4 plays during that drive. These offenses were rolling! That 6-3 score held for the rest of the quarter, and we headed into the 4th with just a one possession game with LSU on the 15 yard line following an AJ McCarron interception! 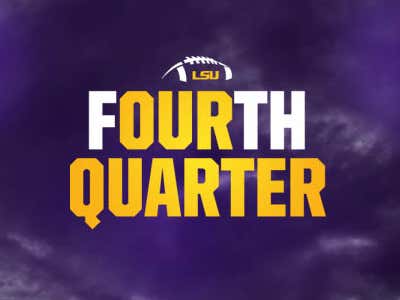 LSU completed a 4 play 2-yard drive to open the 4th, and the Tigers kicker made it 6-6 with 14:13 remaining in the game. The Tide were the only team close to scoring for the rest of the game, but they threw an interception on a trick play and the Tigers took over at the 1 yard line. The only other notable play of the 4th quarter was Brad Wing punting the ball 73 yards to completely flip the field.

In overtime, Alabama shockingly missed a field goal on their possession. LSU drove down to the 7 and kicked a 25-yarder on 3rd down to win the game 9-6. The Game of the Century ended in overtime with a score of 9-6, with 5 made field goals and 4 missed ones. 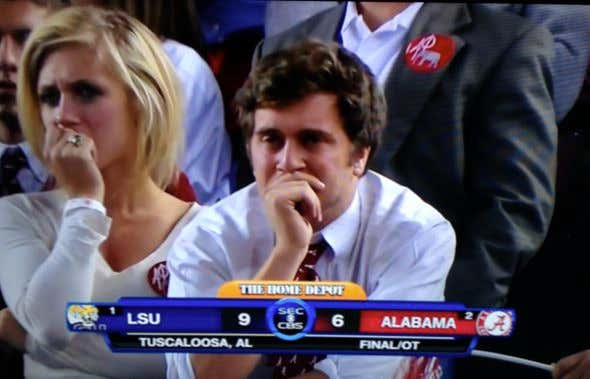 As much as the game completely missed from an entertainment standpoint, it still showed the two best teams in the country doing what they do best: playing defense. But really, the amount of offensive mistakes and special teams mishaps took all of the lure out of the game for me. Regardless, 45 players that participated in this game were drafted in the next 4 years. 45!!! Let’s take a look at the 1st rounders and any other notable names. This list is CRAZY.

Okay, I’ll stop there. That list represents the most players to get drafted into the NFL that ever to participated in a regular season game together. Anyways, I’m not going to recap the rematch, but you all know what happened from here. 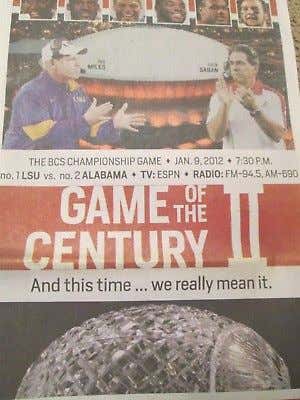 Bama got a rematch in the BCS Title Game, and they handily beat LSU 21-0, meaning they were the National Champions but they split their two games with the Tigers that year. It was just another reason the BCS needed to go. Hopefully we find a couple of those reasons this year to expand the playoff to 8 teams. Or maybe we’ll see another rematch of these two this year? But whatever happens, enjoy the game this weekend! Hopefully we see at least one touchdown!