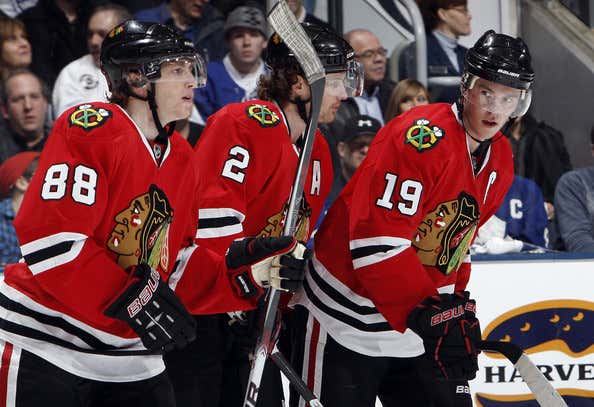 The calendar has officially changed to November and that is a pretty good sample size to determine what kind of team you have. Even though the Blackhawks closed out October with three straight losses, the month was pretty successful overall. Toews looks like a spring chicken, Patrick Kane is the best winger in the NHL, Crawford has returned and returned to form, Jokiharju is a legit top pair defenseman at 19 years old, and the combo of Gustafsson-Seabrook has served as a steady second pairing. In short…they are who I thought they were and the standings largely reflect that despite the recent 3 game skid.

The Blackhawks are a wild card team. They still have elite level talent and they’re getting strong contributions from rookies up and down their lineup, but when you watch the Blackhawks and then you watch a team like the Predators there is a clear talent gap. It’s not much because that’s the nature of the NHL, but it’s there. The Blackhawks will finish somewhere between 3rd in the Central and that second wild card spot if the roster isn’t improved. Crawford, Keith, Toews, Kane, Debrincat, and Jokiharju are true difference-makers every night and most importantly…the team works. They play hard. It’s a team that you can enjoy watching every night and a team that I love for that reason.

There was a TON of negativity in my mentions after the Vancouver game last night and it pissed me right off. Even had to ban a guy who has “Toews” in his twitter handle and is wearing a Redline Radio shirt in his profile picture. I didn’t want to ban that guy. That’s the last type of guy I want to ban. He’s not one of us though. He isn’t with the JoinOrDie movement. The Blackhawks aren’t going to win every night and there were plenty of things to be encouraged about.

–The Blackhawks controlled that game for the first 40 minutes. A quarter of an inch lower on the Saad breakaway and the Blackhawks go up by two goals and put that game on ice.

–The Blackhawks played very well without Patrick Kane who was sick.

–Schmaltz passing behind Seabrook who was jumping into the rush even though Gustafsson had already jumped up in the rush…just overall a bad mistake by the entire squad. Bad reads. That’s a breakdown that can’t happen and usually won’t with this team.

–The game-winning goal…tough to really blame anyone on that. Toews won the race and the battle for the puck. Made a break-out pass to Hayden that would’ve been right on his stick…if he had a stick. Which he didn’t because Hayden had given it to Jokiharju who lost his earlier on the shift. Just an unlucky break.

Overall though there are no moral victories here. That was a game the Blackhawks should’ve put away earlier. It’s the type of game great teams find a way to win. The Blackhawks are not a great team anymore, BUT they could be. Which brings us full circle to the title of this blog: The Blackhawks Are Two Players Away From Being A Great Team.

It’s not just any two players. It’s two impact players. The Blackhawks need a true top 6 forward AND a top four defenseman. Those things aren’t easy to find. They’re expensive both in dollar amount and if you’re looking to acquire one via trade the price tag will be high.

That doesn’t mean it’s impossible though. It might just take sometime. Let’s take a look at what the Blackhawks 2019-20 roster and cap situation could be. Removing Rutta, Kruger, Cam Ward, Brandon Manning(please for the love of god), Kunitz, roughly $5m the Blackhawks have in cap space now, plus a conservative increase to the salary cap to $83.5M and the Blackhawks will have some serious coin to play with next summer. Here is a realistic starting point for their roster: 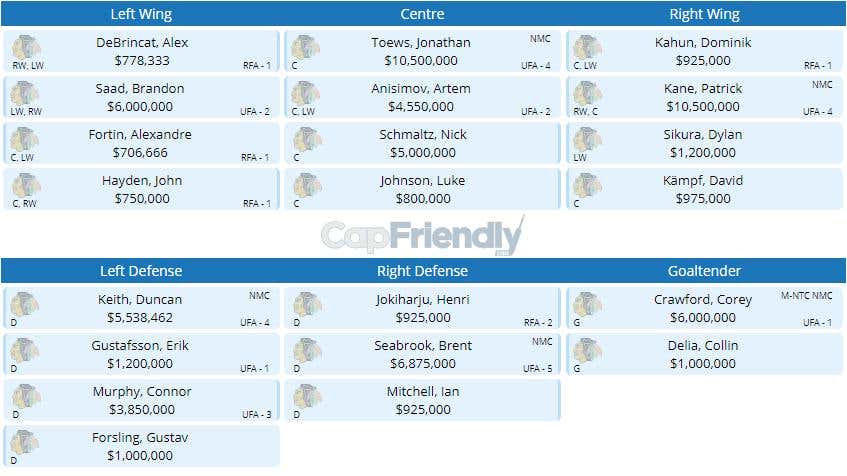 I gave all the RFAs essentially qualifying offers with the exception of Nick Schmaltz who I gave $5M. That squad right there, even with $3M+ of performance bonuses baked in just to play it safe has OVER $13M in cap space to play with.

So here is the thing…I really believe in Ian Mitchell. I talk to people at Denver. Nobody has ever said a bad word about him. They make him sound like captain material. He does everything perfectly on and off the ice. Denver also asks their D to play in a very similar style to what Joel Quenneville likes. They take away space by skating forward in the neutral zone. He can really pivot and go. He is smart. He gets better all the time. It wouldn’t shock me if he stepped in and had a similar impact to what Jokiharju has provided in his first year. That’s how high I am on Mitchell. Day 1 top 4 defenseman.

That doesn’t fix things for this year, nor does it solve the problems up front. There is one man, who is available, who in my mind fixes EVERYTHING up front for the Blackhawks. No…it’s not Artemi Panarin. I had a conversation with someone in the Blue Jackets organization and he said that Panarin would never sign back in Chicago because he’s mad at Stan. That guy has no reason to lie to me. The Jackets will likely have to trade Panarin, but it won’t be to the Blackhawks. There is a guy who the Blackhawks miss even more than Panarin in my opinion and that is Marian Hossa. A two-way GIANT with an absolute BOMB of a shot. There’s only one Marian Hossa, but Mark Stone can do a lot of the same things.

I love Mark Stone. LOVE. He protects the puck. He takes the puck away. He goes to the net. He has an absolute cannon and he also has a big ole brain. If you add him to this team then all of sudden things start to take shape. I am going to give you some lines that I think would make the most sense with Stone in the fold. I don’t want to get one single comment about who is 1C or the numbering or any of that shit.

I get hard just thinking about Kane on a line with Stone. He’s a 6’4 forward with a right-shot who knows how to score goals. He does basically all the things Saad can do, but he’d be a one-timer option on the opposite side and he has an unreal defensive stick. Stone creates a ton of turnovers with his reach and hands. That means more possession and more attempts for Patrick Kane. Anisimov can continue to do Anisimov things meaning just play a straight line game and get to the net.

I think Dylan Sikura will eventually subplant Kahun in the top 6. Kahun had a better camp and is more of a finished product at this point, but I think Sikura has the higher ceiling between the two. His vision and smarts make him a perfect winger opposite of Alex Debrincat. Sikura handed Gaudette the Hobey Baker on a silver platter at the college level and once he has his confidence going and his attention to detail dialed in every shift he will be the perfect modern top 6 winger. I can’t wait to see him with those two guys.

A line with speed, skill, and the ability to hang on to the puck. If this is your third line then you are a VERY dangerous team.

Speed and responsibility. This is a fourth line that Q can trust to give them energy and some offensive juice because of their ability to win races.

Ian Mitchell and Mark Stone make this team into a contender and nobody will convince me otherwise. Now, like I said Mitchell is a year away and Stone is going to cost you. It’s probably going to cost you at least Adam Boqvist and then additional picks and prospects. Then the Blackhawks would have to extend Stone to make giving up Boqvist worth it because Stone is a UFA next summer. Are you willing to do give Stone 6 years at $8M+…I think I would. The time to win is NOW. The Blackhawks have probably a 2 maybe 3 year window to win another Stanley Cup with Toews and Kane. That’s it. Then it’s going to be a long twilight struggle back to the top as this golden generation comes to a close.

If you can’t envision that squad I laid out above winning the Cup with Corey Crawford in net then you are a dummy, a hater, or both. This team is climbing back to the top. They’re not that far off because they still have the elite horses dragging this team along. One big trade. One more year. Join.Or.Die.