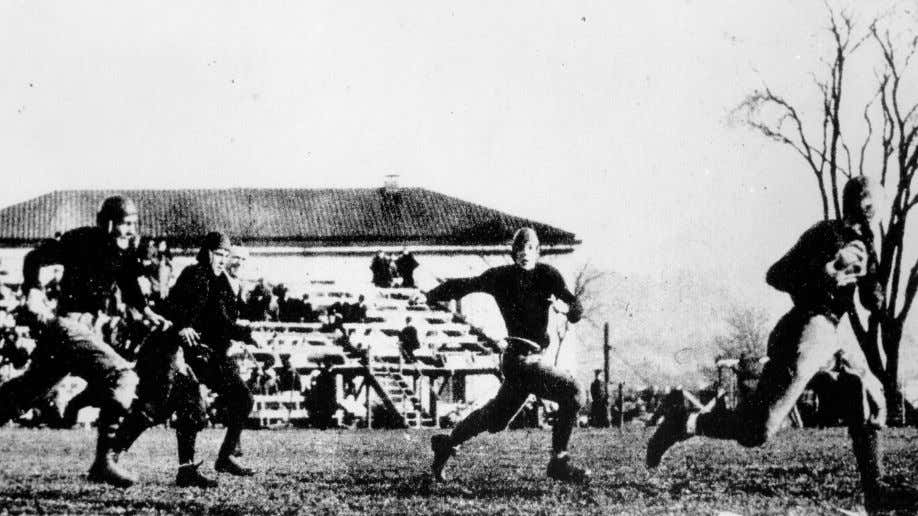 College Football is forever changed in West Point, as Notre Dame attempting to bypass a size disadvantage against Army, reinvents the forward pass on route to a surprising 35-13 win. Previously any pass was tossed to a stationary receiver; Notre Dame throws it to receivers in motion, catching the Army defense off guard. During the summer, Gus Dorais and Knute Rockne practiced the play, while working as lifeguards.

Football had been a rough and violent sport at the start of the 20th Century. There was serious talk of the sport being banned as 18 players died in 1904 and 19 died in 1905 playing football. President Theodore Roosevelt had been a fan of football, as he was influential in the annual Yale-Harvard football game getting the annual game back on track after it had been halted due to on-field violence. Roosevelt felt that football was good for fitness, and life lessons, as it helped toughen up young men while teaching them how to fight within the rules. While public sentiment was calling for football to be shut down, Roosevelt agreed change had to be made and called for a Presidential Commission into reforming the rules. This commission led to the forward pass becoming a legal play in 1906. Passing was restricted in the early years as it was limited to 20 yards and all throws had to be five yards behind the line of scrimmage. A spike in deaths in 1909, led to further in 1909 as passes over 40 yards were legalized. Passing was still rare as an incomplete pass would result in a turnover. That rule was eliminated in 1912, opening the door for passing to become a part of the game.

Notre Dame a small Catholic university located in South Bend, Indiana had begun playing football in 1887. By 1912, they were quietly one of the top teams in the Midwest but had no national exposure. Looking to find a new challenge, after easily completing a 7-0 season in 1912, Coach Jesse Harper agreed to a game against the United State Military Academy at West Point. The Army spurred by their annual game against Navy had been one of the powers in football for two decades. Coached by Charles Dudley Daly, the Cadets were one of the biggest teams in the nation, winning their first four games by a combined score of 72-6. The Irish were also unbeaten, winning their first three games by a combined score of 169-7.

During the previous summer, Notre Dame Team captain Knute Rockne and Gus Dorais worked together as lifeguards on a beach in Ohio. During downtime, the two practiced plays for the upcoming season. With Rockne catching passes in stride from Dorias. The play was not used in any the of the Irish first three games, but going against a bigger and stronger team they needed to find an edge. Playing before 5,000 fans on the ceremonial grounds in West Point, Notre Dame began to quickly move the ball thanks to forward pass. Dorias completed 14 of 17 passes for 243 yards with two touchdowns as Notre Dame won the game 35-13, pulling away in the second half with 21-unanswered points. It was the only loss Army would suffer in 1913, posting a record of 8-1, while Notre Dame again went 7-0.

As news of Notre Dame’s use of the forward pass spread, everyone took notice and began to copy the playing, opening up the game of football. It would not take long for the forward pass to become a major part of college football, especially in the 1920’s when Knute Rockne became coach of his Alma matter. Often, Notre Dame is incorrectly credited with creating the forward pass, though their methods took it to a new level. The win helped elevate, Notre Dame into national prominence, and helped make them one of the top programs in the history of college football.