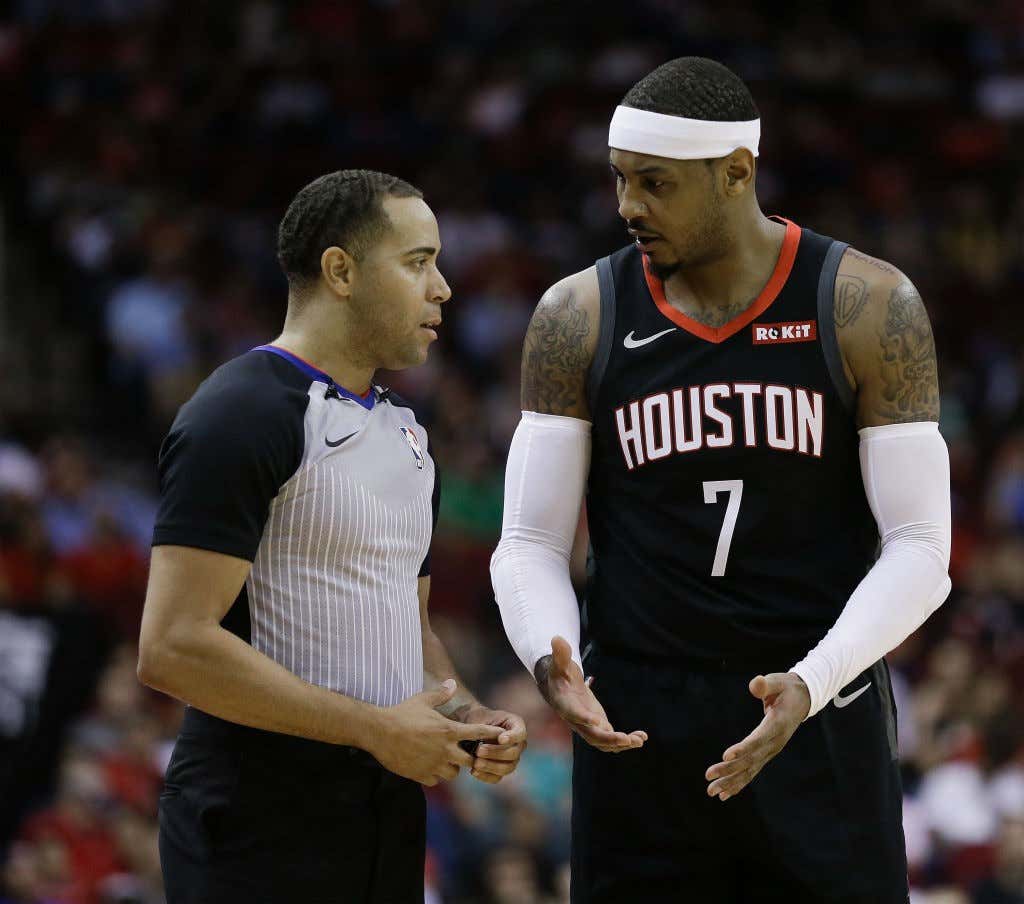 Good morning everybody and welcome to another edition of Last Night In The NBA where we catch you up on everything that went down from the night before in the Association. It was a full night of hoops on Tuesday with 8 total games on the schedule, and there without a double some teams that woke up this morning and are feeling the pressure. Not everyone can get off to great starts, and there are a handful of teams that we all thought would be much better that find themselves in a bit of a pickle. It’s still early and there’s for sure time for them to figure it out, but the truth hurts. Really outside of one game last night was a night of blowouts, so if you like big offensive performances, this was a night for you. Interested? Keep reading because this is what happened.

I’ll have my thoughts on the Celts later in their normal blog, so let’s focus on the Pistons here. Little different when you have to play a real team, and suddenly that 4-0 record is 4-2 after back to back losses to the Celtics. The Pistons are interesting in that they’ve gotten an MVP caliber start from someone like Blake, but I’m not sure they’re as good as their record indicates. Who have they beaten? While it’s true their two best players showed up and were fairly dominant

It’s clear after these two games that they are in a tier below where BOS is. Honestly that’s fine in my opinion and Pistons fans should still be excited about this team because it does look like a playoff team, just not quite at that Eastern Conference contender stage yet. The 17 TOs didn;t help, nor did the 8-30 performance from deep, but that’s what happens when you’re playing the leagues best defense.

One might have thought that after an 18 point third quarter the Heat were cooked and should have just given up. Instead they kept battling and dropped 40 in the final frame, so I give them credit for not just throwing in the towel. They actually played pretty well, with six players in double figures and 47/39% splits while making 11 3PM. That usually wins you more games than not. Especially when you get a throwback performance from Wade

But as we’ve learned, defense matters. Giving up 125 points in regulation is never going to get it done and is a little weird coming from a team like MIA that isn’t usually a total disaster on the defensive end.

For CHA, look, this team is fun as hell to watch. I don’t know where they’ll finish the year, but I know that on any given night they have shown they can explode like this. I’m talking 54/46% splits, 13 3PM, six players in double figures and three of them with at least 20 points, shit, we even got a Tony Parker double double!!

The facts are this team is 3rd in the East in scoring trailing just MIL and TOR, and that is something I don’t think anyone saw coming. They also own the 4th best point differential, so they are showing up on both ends. For a team looking to make it back to the playoffs, that’s the formula.

Look someone had to win this game, and the Cavs are officially on the board! Congrats to them for finally snagging their first win. Sure it was against the Hawks, but you think they care? A wins is a win is a win

It was the second half that did it, with the Cavs exploding for 78 points over the final 24 minutes. They finished with 50/52% splits and 43(!!!!) FTA, so when you turn in that type of performance it’s basically impossible to lose. Who knows how many of these they may get, so I say savor this one.

For ATL, very Hawks of you to lose to this team. I would best describe them as inconsistent, because there are nights where they look like an actual basketball team, and then there are nights like last night. I don’t know how you defend this performance so I won’t try, instead just watch the Trae Young highlights because he was essentially the only bright spot

GO BABY KINGS GO!!! This is it, this is the year, I can feel it. I knew my weird random faith in this team would be rewarded, and boy was it ever. 5 wins? Already? Let’s fucking cook!!

Who knew that Nemanja Bjelica would be such a big and impactful signing this summer? Nobody that’s who. We were too busy laughing that he burned the Sixers in order to go to SAC, and guess what, he’s the only one laughing now because the Kings rule and the Sixers…well we’ll get to them in a minute. What’s even more impressive about this SAC team is that 3 of their 5 wins have come on the road. I know the Magic are awful, but they have played good teams tough so you never know what you’re going to get. The Kings had 6 players in double figures and essentially were in control of this game the entire way. Great win for them.

For ORL, yeah I mean not the best look, but what do you expect when you shoot 3925% and can’t break 100. I don’t care who are you playing, in today’s NBA that’ll get your ass beat. Whatever though, at least Gordon and Vucevic looked good

Sixers fans won’t tell you they are nervous, but they are lying. How could you look at this team, one many picked as a legit Finals contender, see their start and not be a little nervous there is regression on the horizon? I mean they’re 0-4 on the road, and against the actual two best teams in the conference they’ve been absolutely murdered. Their 4 wins are against CHI/ORL/CHA/ATL. Any time they’ve played a good team outside of CHA, they lose. Markelle Fultz does not look fixed, Simmons puts up great numbers but last night was one of those rare triple doubles with 11 TOs

and yes, Joel Embiid is still a beast

But what happened to this team’s defense? Giving up this many points in regulation? I thought defense was supposed to be this team’s strength. And I get it. TOR is in a different class than EVERYBODY right now, but don’t use that as an excuse. The Sixers aren’t playing their best basketball or anything close to it, and while it is just October, they are the only current playoff team that is winless on the road. That seems like an issue.

For TOR, come on, it’s a little bullshit they have played almost every game at home. 6 of their first 8? That’s a little ridiculous. We know they are nearly unbeatable in this building, and with Kawhi back in the lineup he didn’t seem to miss a beat

As impressive as he was, we need to talk about the play of Kyle Lowry. I’m not sure there is a guard in the East having a better start than him

12+ assists in 5 of his first 8 games? That’s pretty unusual for him but great to see if you’re a Raptors fan. You just aren’t going to beat them when they shoot 51% for the game and you turn it over 23 times. They started the game scoring 35, 32, 38 points, and there are few teams that can hang with that type of scoring output. Philly is not one of them.

Also shouts to Siakam who had 15/15 and Serge Ibaka who continues his strong play with 16/8 on 7-13 shooting. They both have been awesome to start the year too.

There were some people who thought maybe the Blazers would be the ones who fell out of the playoff race this year. Well, what if I told you so far they have been one of the best teams in the entire conference? Going up against HOU was a nice test for them, and I’d say the passed with flying fucking colors

Lillard won his point guard battle against CP3 with 22/7 on 8-10 shooting, and he seemed pretty happy after the game

How many teams can say they had two quarters under 19 points against the Rockets, and still won this game by nearly 20 points? That says more about the disaster that HOU is right now, but I found that interesting. I have to imagine POR is one of the few teams that have ever pulled that off over the last few years.

For HOU, shit is bad folks, real bad. I get it, Harden didn’t play, but come on what is this. Just 1 win at this point of the year? Finishing with 32/23% splits? Missing 10 FTs? I know people thought they would take a step back this season, but I don’t think we meant this type of fall. Yes, it’s early, but they also play in the goddamn West and are already 5 games back of GS. At some point you dig yourself too deep a whole in such a competitive conference.

I don’t know how to fix them, but something needs to happen. I guess this is why they are pushing so hard for Jimmy Butler. He may be the only thing that can save the, and they may not even get him.

You wanna see a disaster? Forget HOU and turn your attention to the Wizards. There’s bad, and then there’s whatever is going on in the nation’s capital. This has the risk of blowing up big time given the group of talent on this roster, and sure Wall/Beal show up like they always do

But where is everyone else?  Kelly Oubre went 4-10, Jeff Green 2-6, Otto Porter 6-14, the offense was a struggle and the 20 TOs sure didn’t help either. You can just tell by their body language they are starting to quit, and we aren’t even at Thanksgiving yet.

Should Scott Brooks be on the hot seat? Maybe.

For MEM, look who all the sudden is 4-2! Now healthy, they look completely different from last year and had a nice 48/46% game with 13 3PM and 31 FTA. The grit and grind life is back for this team, and that’s where they thrive

A nice surprise start for sure, I dunno if they can maintain it and eventually make the playoffs, but it is good to see Mike Conley back and playing well.

OK, maybe the Thunder are starting to figure it out. Part of that was getting Westbrook back and waiting for him to do Westbrook things, which he certainly did last night

And as we know, this team is at its best when his help shows up, which both PG13 and Steven Adams did, combining for 50 points

There was also obviously the dust up between Westbrook and Patrick Beverly, just your classed HOLD ME BACK basketball “fight”. These two have a history and clearly don’t like each other, but in my opinion this dust up was pretty weak. Patrick Beverly is a psycho so you never know what to expect from him, but as we know Russell loves to talk that shit. I say book them for the next Rough N Rowdy and get it over with.

For LAC, it’s tough to win on the road when really only two guys show up, and that was the story with Gallo and Tobias being really the only options for the starters

A congratulations is in order though for Lou Williams, who did have a nice career accomplishment last night

third player to do this in the last 48 years is pretty impressive. Getting blown out, less impressive.

And that’s it! You’re now all caught up on everything that happened last night in the NBA. We’re back tonight with 7 more games including IND/NYK, UTA/MIN, NO/GS, and DAL/LAL. As always feel free to do other stuff tonight, just make sure you check back in the morning so I can fill you in on what you missed.

lasst night in the nba+ 4 Tags