Certain things in your life are forever kept in high regard because of how cool they were to you as a kid and I would argue that’s been the case in people’s lives for “time immemorial” as Tony Soprano once said.

For example, I just went to see Mid90s (Note- I loved the movie) after learning it was a passion project for Jonah Hill. I then listened to his interview on “The Big Picture” Podcast  and his interview with Howard Stern, and was very impressed with how much the skating culture, hip hop and that time period meant to him. I didn’t necessarily have those same interests as Hill, however I connected with how certain things can be held in such a high regard, and how they can mean so much to you especially at a young age. I was equally impressed with how Hill stated a ton of times he didn’t real give a crap about how the movie did. It was his directorial debut and he chose to make a low budget film that had no mass appeal to kill a box office, and he couldn’t care less because this culture, and time period meant the world to him  and he felt a true importance to tell the story.

Everyone has these type of childhood memories, and everyone holds certain things close to their heart. Take for example my father. Through a wild stroke of luck – Joe Namath not only visited my father’s office as part of a promotional tour, but threw a pass to my father and then autographed the ball. Just before that the wise-ass guy next to him made a comment like “look at the rug on Namath” to which my father commented- “that can’t be a rug … he’s Joe Namath.” The point being – he obviously knew it was a hairpiece, but he was also reminding the guy how cool Joe Namath was.

Which ties into to my initial point of how cool certain things can be to you as a kid. For me at different ages over the years, things on that list off the top of my head were The Ninja Turtles, Ken Griffey Jr. , Total Request Live, Jason Williams, Eminem and Zack Morris.

He was the man. Now what  you have to remember was like  many people I didn’t watch this 1- in live time, but rather in syndication and 2- as a teenager who knew the jokes were corny, or the plots ultra impossible. I was old enough to understand it was silly, but young enough to still be wide eyed with optimism that High School could be that cool . As pointed out , in an article very elegantly by Rob O’ Conchuir :

“what made the show a hit in our youth was how exciting it was to dream of the world it represented. Nobody watched “Saved by the Bell” in their actual teen years – no, it was a show for people that were tantalizingly on the cusp of hallowed Adolescence – for people who wished they were teenagers, the way teenagers wish they could be adults. That promised-land era where you didn’t have the concerns of an adult while also having none of the barriers of a little kid. You could go to the cinema or the shops by yourself, you could hang out in diners and eat French fries all day. Supposedly you could even go out with girls! “

Zack pulling off one of his patented schemes , or figuring out a way to scam Belding, or have his friends help him out of a jam – to an innocent 9, 10 or 11 year old – transitioning from little kid to wise ass teenager was almost like having a play book of what to use in real life. When he cracked a joke and got a response, you tried to do the same in class and make your friends laugh, when some of your friends started to learn they didn’t have to do everything their parents told them to and started to rebel – you joined in and rebelled too – some more than others. And lastly, when you saw he showed off, and landed the girl. You did the same. He was in a ton of ways the superhero of sitcoms- in the sense he escaped every problem. He was a cool imaginary older brother you looked up to.

Now add in the fact Kelly Kapowski was breathtakingly beautiful during a time that I,  like many other kids, had just reached the age where you started to be interested in girls instead of completely ignoring them.  As well as the life lessons you (sort of) learned in the socially conscious episodes about smoking, drugs, drunk driving etc, the show was vastly important growing up.

As you grow older you realize how silly it is, and instead of watching it with extreme interest in the plot like you did at 10 , you watch it hungover at 22 because it happened to be on when you wake up at 2pm. Pop Culture has poked fun at it over the years – Kimmel did his little skits , and Funny Or Die has a series of “Zack Morris is Trash” videos pointing at how crappy some of the things Zack did to get his way were. Nonetheless- the show seems to strike a nerve with a ton of people, and seems as if one way or the other was watched by nearly everyone.

Now… how do we go about ranking these episodes ? Well shout out to Reags who actually inspired me to do this blog considering how well he wrote his Office episode rankings blog.

To put a Rico spin on it, I’ve decided to rank the episodes from worst to first (as all things should be ranked), in tiers of Steakhouses. 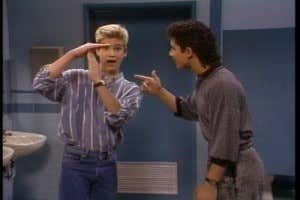 I am only ranking episodes under the Saved By The Bell brand. For those of you youngsters reading this (shout out 15 Year Old Steve) you may not know- Saved By The Bell was originally set as Good Morning Miss Bliss. It was also set in Indiana as middle schoolers and somehow 3 of the characters and the principle all moved to California at the same time when 9th grade started. TV Magic as they say.  For that reason I am not including those episodes.

Leaves us with 86 Episodes.

To preface … it’s still steak, but it sucks. Don’t get me wrong – I’ll eat it… not by my choice, just like f it’s 7am and one of these episodes are on I’ll watch . But much like Outback, if asked to pick a place to eat I much rather go somewhere else.

So all three of these are grouped together as they don’t even quantify as episodes, they are all clip shows. However, if we are being truthful, the Best Summer Of My Life episode has to be the best of the 3 – because I am certain it’s the first time I saw Double Stuf Oreo’s in my life, which if aren’t the best cookie ever, are damn near the top of the list.  Additionally, the episodes are Malibu Sands are SNEAKY underrated as some of it’s best of the series.

This is a horrific episode. It’s not funny, it’s dumb. It’s the worst of the series.

The Bayside Gang goes to a Murder Mystery resort (I think it’s a resort), and the actors at the resort (I think) play out a series of events/ fake murder that the gang has to solve.

Overall the episode’s pretty weak. It leaves the confines of Bayside for some kind of weird game I still to this day don’t understand people would want to play. Weird choice of a plot. Sucked to be quite frank.

You’ll notice a theme in these episodes …. Tori not Kelly. A significant downgrade that even as a 10 or 11 year old kid watching this knew that Kelly missing is just not right. I missed her, Zack missed her , and the show missed her.

Now I have to say, not all the Tori episodes are auto skips… we’ll get to that later. In fact some of the plots , teaching points, moments are very good, and in fact so good they overcome Tori who also sucks. These 5 sucked the most.

But, to be fair I take this very seriously, and still rank them from worst to best , so I had to examine them all and while School Song has an awesomely underrated Graduation Song (Link) , Day of Detention edged it out because Zack is eluding Belding the entire episode (in the most ridiculous ways possible) which again as a 10 year old is like the coolest thing you can do. Also brownie points to them addressing that administration knew about Senior Cut Day and just didn’t give a rat’s ass. Very realistic. For our own senior cut day administration knew nearly instantly what day it was, warned us not to do it, then didn’t really enforce it once it was done , however it put a bit of a scare in you like “can we really get away with this ? ” Very realistic.

The next tier will be announced soon.