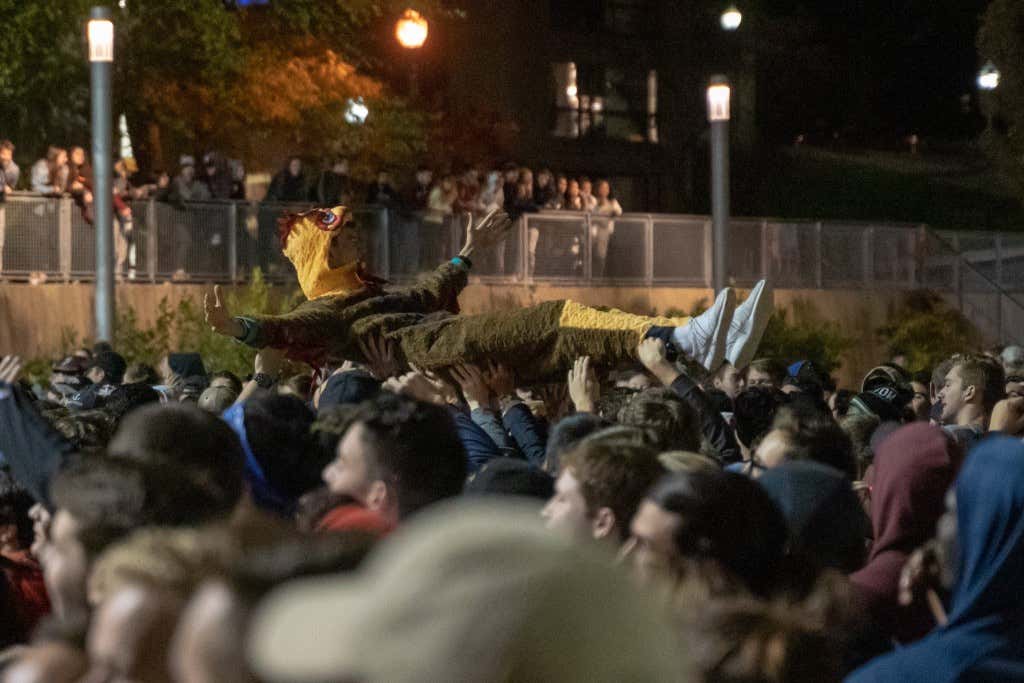 Bin Laden’s capture. The Patriots losing to the Giants. The first warm day of the Spring after a brutal Western Massachusetts winter. The Red Sox winning the World Series. St. Patrick’s Day. UMass doesn’t really need a reason to get after it, but we appreciate one just for the excuse.

I was a freshman in 2007. Just a month in a half into that journey, the Red Sox swept the Colorado Rockies directly the fuck up outta the World Series. And the moment the last out was recorded, something clicked in every single person’s head in Southwest. Like moths to a glowing light, everyone sprinted out of their dorms to the largest possible open gathering area outside of Berkshire and it was on. There was no preplanning. Everybody just knew that’s just what you do. There was nothing too crazy. It didn’t burn to the ground like in ’03. It couldn’t have possibly duplicated the same unbridled joy of ’04. Frat Row was long gone. The police riot gear and horses were very much prepared for a war of any magnitude. No one jumped off the dining common, at least I don’t remember anyone doing so. There was also no civilian dogs, that feels like a new staple. Folks climbed trees; we reminded the Yankees that they did, in fact, suck; a crowd-surfer was jettisoned into the night sky landing SQUARELY on his neck; one kid got thrown through (yes, through) the Thoreau Common Room window; multiple people were expelled; the cops eventually got fed up and straight up charged at the crowd on horseback like a scene out of The fucking Patriot. It was a great night.

A night much like tonight. Mind you, today was the tail-end of a Halloween weekend at UMass. I say “a” because next weekend is also Halloween at UMass. That’s just how the calendar works when Halloween falls on a Wednesday. I don’t know how other schools do it, I don’t really care. I’m just here to give credit where it’s due. As I’ve written before in UMass blogs, older generations tend to hype up their times in Amherst as rowdier, more delinquent, boozier days than the present – whenever that present may be. And while I get it – there was no wildlife on fire tonight – UMass remains a flat circle. The Red Sox win a World Series, folks gather in Southwest, jump off shit, wake up with little recollection of what actually happened, and at least a couple of kids will be forced to enroll at Bridgewater State due to their impending expulsions. It’s a great night.

Somewhere out there tonight, this man is smiling down at you all for carrying on tradition.