CTV News- A mascot maker says he will not buckle to legal threats from Ontario’s public broadcaster about his pothead parody of the beloved children’s TV character Polkaroo.

Mark Scott enthralled revellers and international media at a cannabis legalization celebration in a Toronto park last Wednesday with his costume of a joint-toting, red-eyed marsupial called Tokaroo — an unsanctioned riff on Polkaroo, the multicolour muumuu-clad creature who has been a fixture on TVO since the early 1970s.

Scott said he spent more than two decades donning the green-furred, yellow-tailed Polkaroo costume at promotional appearances, but his relationship with TVO has soured after he received a cease-and-desist notice from the publicly funded TV station Tuesday.

“I think that TVO is being a little bully-ish about this,” said Scott. “(Their slogan is), ‘Never stop learning,’ and they’re doing a lot of ‘never’ and ‘stopping.”‘

Scott maintains that any similarities between Polkaroo and Tokaroo are “purely coincidental,” but he said both are committed to the development of young minds.

There it is: my favorite story of 2018. God almighty we needed this. Mark Scott is a motherfucking hero. This guy spends over twenty years prancing around inside a sweaty, stuffy, claustrophobic mascot costume. He gets headbutted in the ballsack by children at every mall appearance. He can’t speak whenever he’s in that thing. Knows he can’t cut a hole in the dick area and bang a bunch of furries–the ONE GOOD THING about being a career mascot–because the big network owns the costume.

So, naturally, he’s a huge pothead. Who wouldn’t be in those circumstances? Nobody can see how fucked your eyes are, and all you have to do is act goofy around kids all day. Mark Scott loves the farmers’ grass, as Willie would say. As a small act of rebellion against the austere suits at his network, he takes the costume to a weed celebration, makes a couple minor alterations, sews together the biggest mascot joint on record, and rebrands it all as “Tokaroo.” I can’t stop grinning at the name, especially when you watch him dancing and then handing that joint to his buddy, Bongdick. 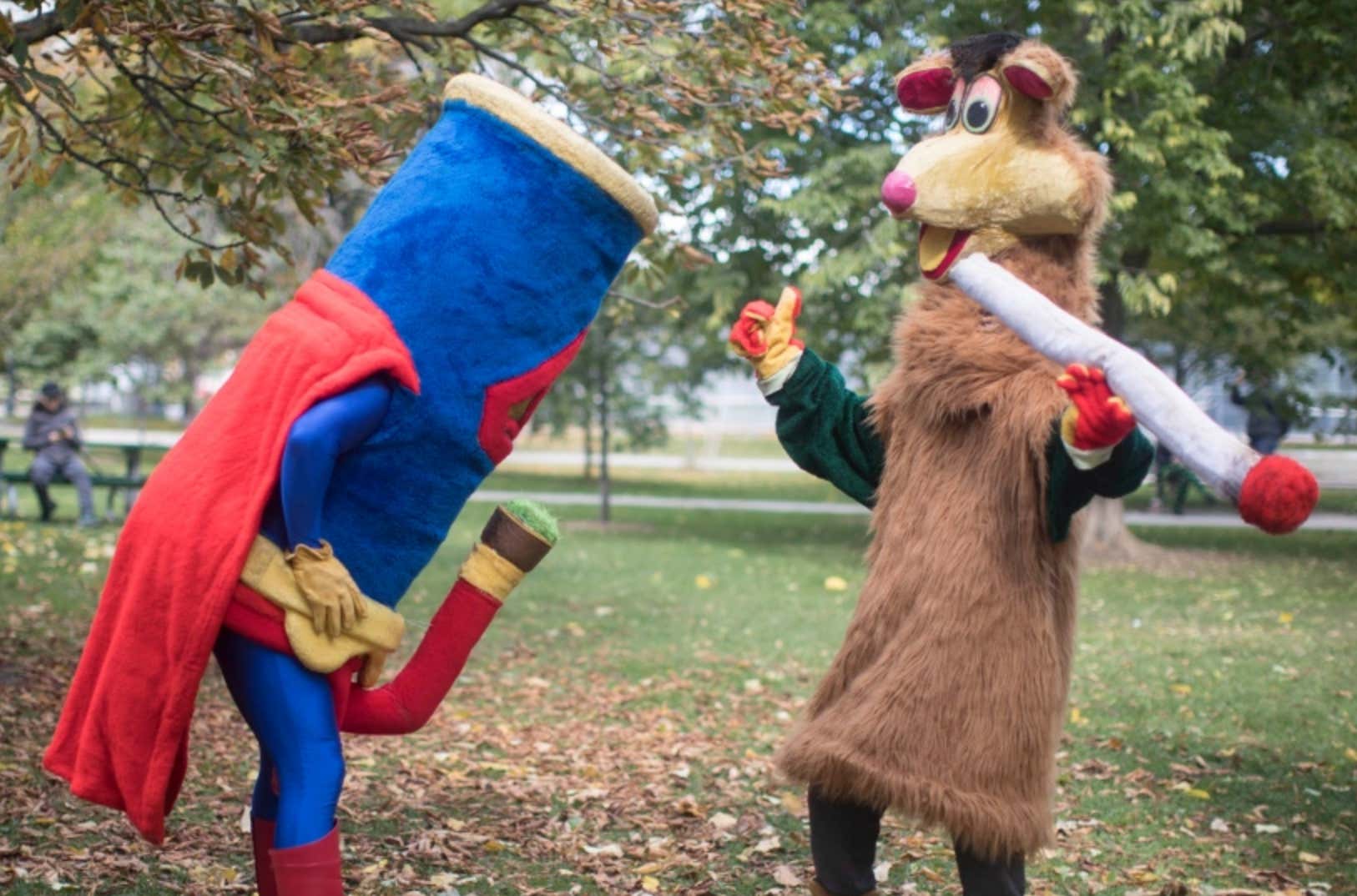 I have actual tears on my face.

That doesn’t fly with the dicks upstairs at TVO. They can’t have their beloved children’s character stuffing his face with frozen snickers bars and passing out in the leaves at a 420 festival. So they slap him with the cease and desist. With his job in jeopardy, Mark Scott has to capitulate. Right?

Wrong. Never surrender. “Any similarities between Polkaroo and Tokaroo are purely coincidental.” lolllll. Look at these two:

Same ears, same shape, different colored fur. I’m fairly sure the guy had to make the costume himself. So the fact that he could have made ANYTHING but chose instead to copy the exact shape and outline of Polkaroo reveals a level of petty vengeance that I respect more than he’ll ever know.

Keep fighting the good fight, Mark. If Polkaroo has to die so that Tokaroo can live, I think even the kids will be happier with the upgrade.