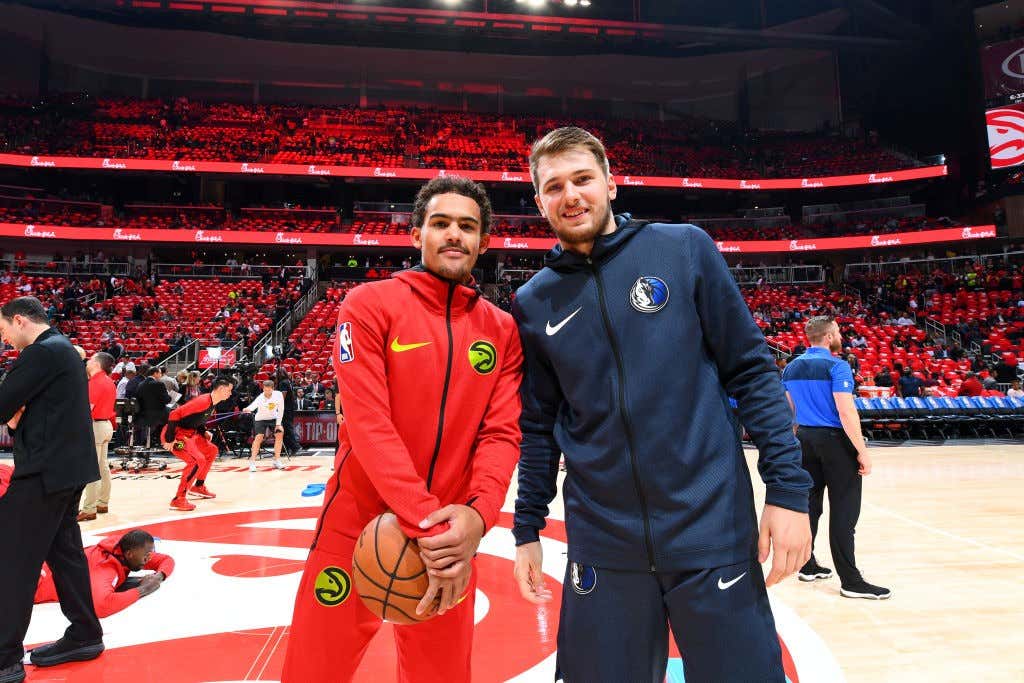 It may not be fair, but for better or worse these two players are going to be tied together for the rest of their careers. That’s what happens when you’re a high lottery draft pick and you get traded for one another, fans will always be looking at what you do on the court and compare you to the other guy. Both rookies are in a good spot in that they play for teams that kinda stink so there is plenty of opportunity for minutes, and so far each of them has had a really, really good start to their rookie seasons. Well last night was the first time they faced off, and honestly probably the first time two 24 win teams from the year before got an ESPN primetime game. But that’s what star power and rookie hype will get ya, and safe to say each delivered

In terms of the straight box score numbers, the advantage clearly goes to Luka, who finished with 21/9/2 on 7-18 shooting. Trae Young wasn’t that far behind, with 17/4/5 of his own, but he couldn’t buy a bucket going 3-12. What I liked about his night though was when the pressure got high, he showed up. He had 12 of his 17 points in the fourth, and was a big reason why the Hawks were able to come back from what at one time was a 26 point deficit. That sort of big play electricity is probably what the Hawks had in mind when they made this trade.

And for all the haters that Young may have had heading into the Draft, here’s the reality. He’s now the only other person in NBA history other than Oscar Robertson to snag 85 points and 30 assists through their first four career games. Seriously, here’s the list

LeBron didn’t do it, Durant didn’t do it, Jordan didn’t do it, Kobe didn’t do it. That’s pretty insane if you ask me. Both of these rookies have played 4 games this season, and as we expected the race for ROY is going to be tight this entire season. Here’s how the two stack up right now

Pretty similar I would say. You have to give the slight edge to Trae since he scores slightly more, has better splits, double the assists and fewer turnovers all while playing fewer minutes. I feel like heading into the season we all just assumed the ROY was going to be Ayton, and don’t get me wrong he’s been good for PHX, but it’s clear these two have been a cut above to start the NBA season.

And honestly, I think it’s pretty cool that both have been so good. This was one of those trades where when it happened you could have convinced yourself that somehow both teams won. They both got a really good player at a position of need, while both still had question marks as to how their games would translate. Well we now know the answer to that, and I have a feeling we’re going to look back in 10 years and both franchises are going to be happy with their decision.

We get Round 2 of this matchup on December 12th, this time in DAL, so there’s a lot of basketball to be played before then. Here’s to praying both of these guys are healthy by that game, and that Round 2 is every bit as exciting as this first round was. I don’t want to get ahead of myself, but now that we’ve seen these rookies play their first week, doesn’t it feel like we are trending towards one of those unicorn NBA draft classes? I’m not going as crazy as to say this is in the 1996 or 2003 levels, but it has gotten off to a great start this season.