I know that most of you don’t come to Barstool to read about my life. But I’m told turning 30 is a big deal. I figured if there was a day to reflect on my path to where I am today, it’s on my 30th birthday. So buckle in, folks.

Since I could form my own thoughts, I knew I wanted to be a sports broadcaster. I was the kid that ran around talking about sports to anyone who would listen. I didn’t have another option. For 8th grade graduation, we had to say where we wanted to be in 15 years. I said a sports broadcaster for ESPN. I give all the credit to my dad for helping me find that passion. He took my little sister and I to every single A&M football game at Kyle Field growing up and let me tell you, I’ve never loved anything as much I loved Aggie football as a kid. I had an amazing childhood. If I ever blame something in my life for things that go wrong, I can never blame my parents. They are incredible people.

But as always, life isn’t perfect. I lost my best friend the summer before I went to college. He meant everything to me. Of course, as entitled 18 year olds, we fought. A ton. I’ll never forget looking at my phone and refusing to take his call because I was mad at him and then learning just a few days later that he was in a fatal car crash. You talk about something messing you up at a vulnerable age, that did it. I have a tattoo on my wrist of the date. It reminds me how short life is and how to treat people well. You just never know when it can be taken away. 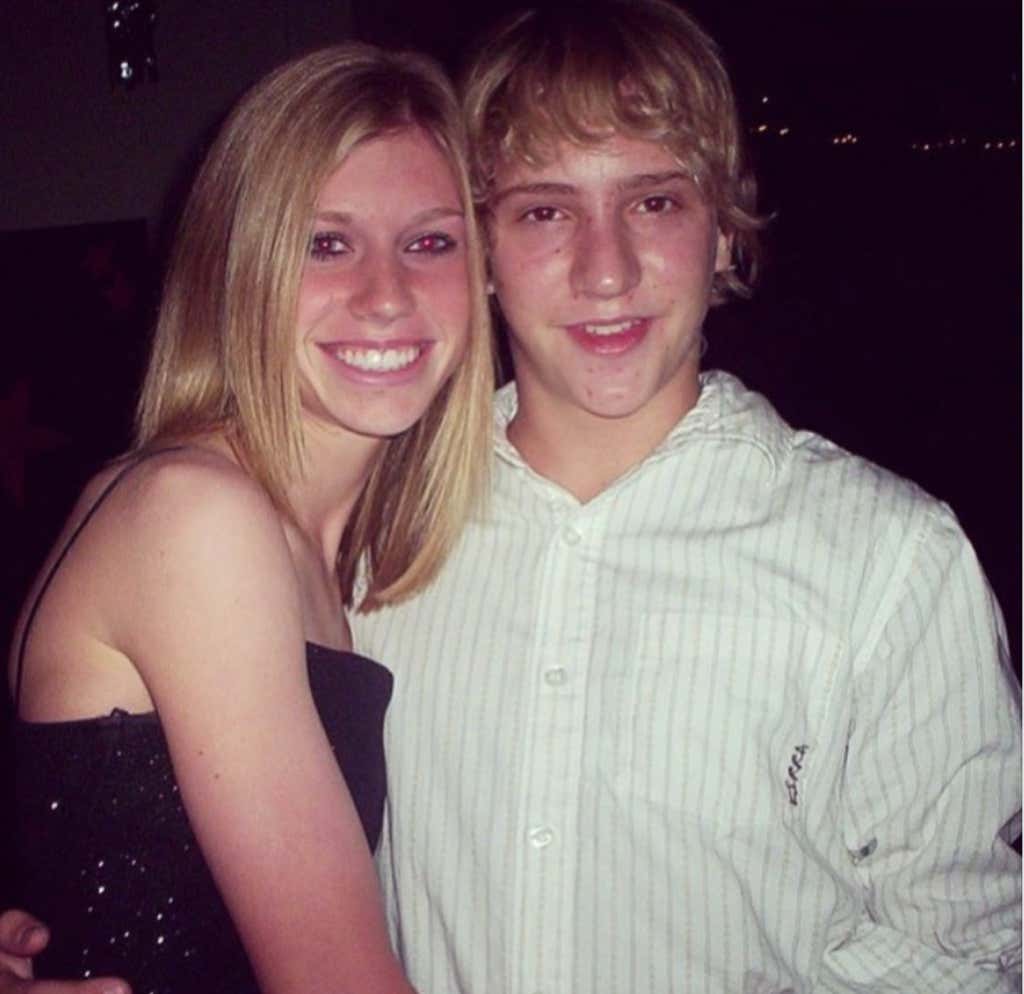 Despite not leaving my room for weeks, I packed up and went to A&M. Then my life spiraled. I was diagnosed with depression. I didn’t give a fuck about anything. I made A TON of bad decisions. So many that I almost lost my first job in the industry when I was 20. That’s how this decade started. Me clinging on to my dream of working in sports by a thread. Luckily, I had a boss named Michelle Glover who gave me another shot. I’m forever grateful for that.

By the time I graduated college, I had gone from the near-fired fuck up to winning the award for the student worker of the year. Plus, I was the JumboTron reporter for A&M football games. I thought I’d never get to do anything cooler. I went from going to games as a fan my entire life to a water girl for the team to being featured for 100K people to see.

After graduation and an internship at the Cannes Film Festival, I worked as a producer for next to nothing and clawed my way onto a local radio show. I worked my ass off and got to cover a Heisman trophy winner at A&M and ended up getting to do a single sideline game for Fox Sports SW. My now agent (you’re the best, Josh) happened to see that game and signed me shortly after. Things happened quickly. I briefly moved to Atlanta to cover the NBA for Fox Sports South. That turned into getting a job with ESPN and the SEC Network. Not only was I on the sidelines in some of the biggest stadiums in the country, I traveled every week for Sports Center. Even though I was never home, I got to live in College Station and I loved it. I even got to cover a few A&M games with an ESPN mic in my hand. Talk about waterworks. Dreams do come true. 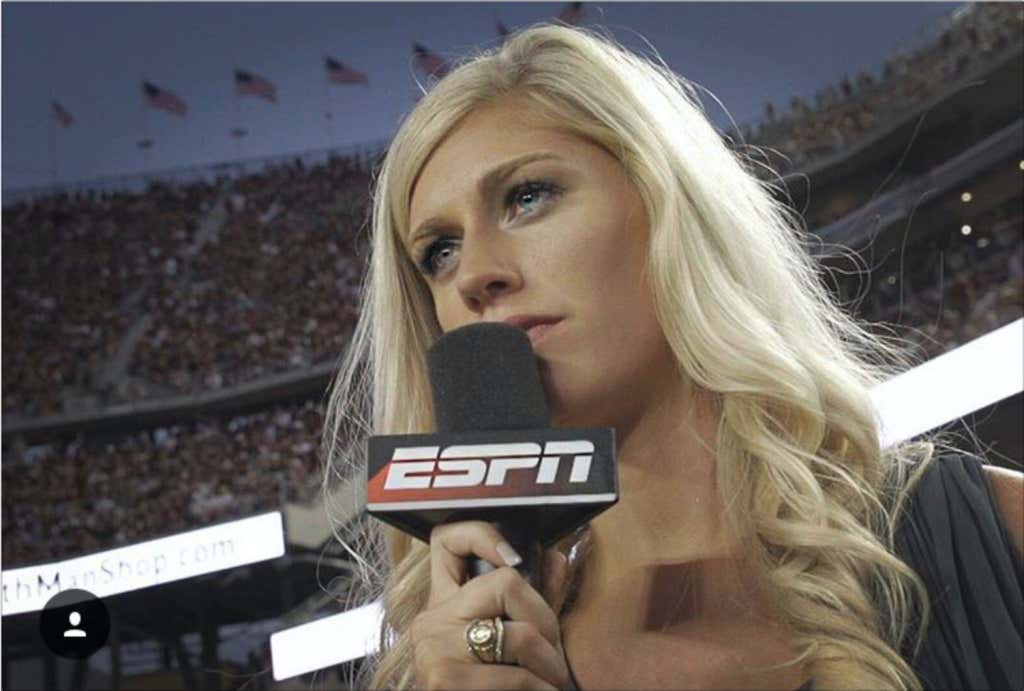 Again, life isn’t perfect. Along the way, I was diagnosed with cancer. I’ve shared my story a couple of times, so I don’t need to rehash it here. But it took a major toll on not only my physical health, but my mental health. But for as much as it took away, it gave me a drive to fight. I’ll be five years in remission in November. (Big year for me!)

Then after a little over two years with the self proclaimed World Wide Leader, I was all of a sudden unemployed. People who I trusted went behind my back and said that I wasn’t good enough anymore. I had the rug pulled out from under me. I was basically told that I’d never be more than a sideline reporter and that I wasn’t smart or talented enough to do anything else. There were other things that happened that I’ll never forget too. I don’t want to throw people under the bus, but just know that everything 1000% isn’t sunshine and roses there. Not even close.

Another spiral. Except this time, I listened to people around me more. My friends and family reminded me that I was good enough even though some asshole said I wasn’t. Somebody very important in this process was my mentor Gabe Bock. For anybody who has seen Friday Night Lights the show, he’s the Coach Taylor to my Smash Williams. He convinced me to try something new. So together, we started my own internet-radio show. 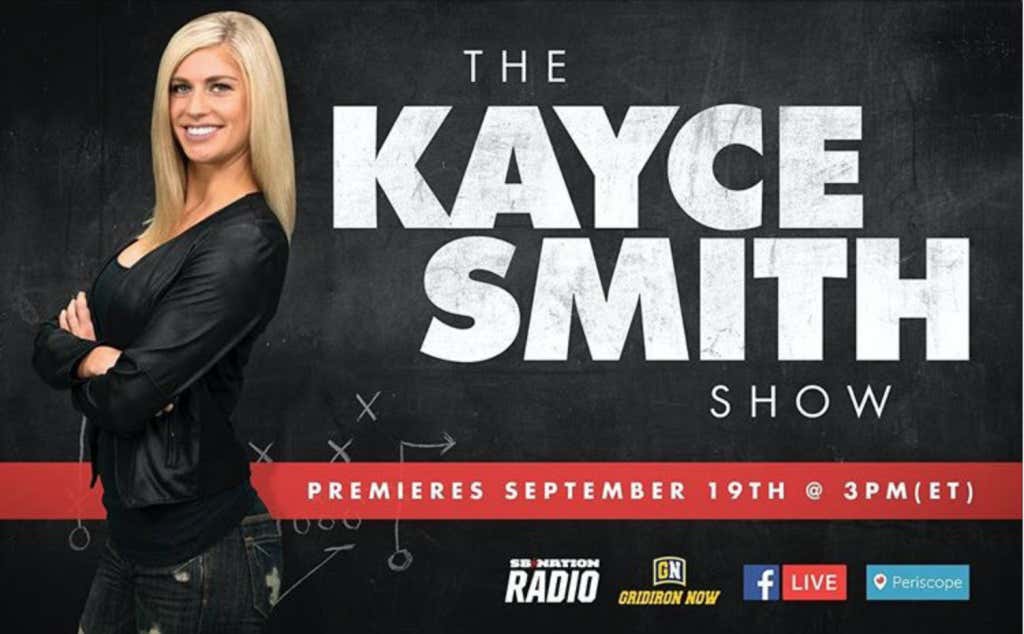 I was basically paying to work, but it was worth it. I believed that I could make something of it. I’m full of opinions and I wanted to share them. And people seemed to like it. It was different than the sidelines, but it was 1000% more “me.” I loved building something from the ground up, but I still felt like something was missing. I remember a morning where I was taking my trash out of my newly renovated house (yes, I bought a house. How un-Millennial of me!) in College Station, Texas and thinking… this can’t be it. I liked my life there, but I knew there had to be more. I had bigger dreams. My purpose was bigger.

Except nobody with the power to give me a shot at that purpose came calling. My depression flared up and I started acting out. I hurt the closest people to me. To be frank, I was a complete asshole.

I know people give me a ton of shit for loving Boston as much as I do. But let me say this, I didn’t choose Boston. It chose me. 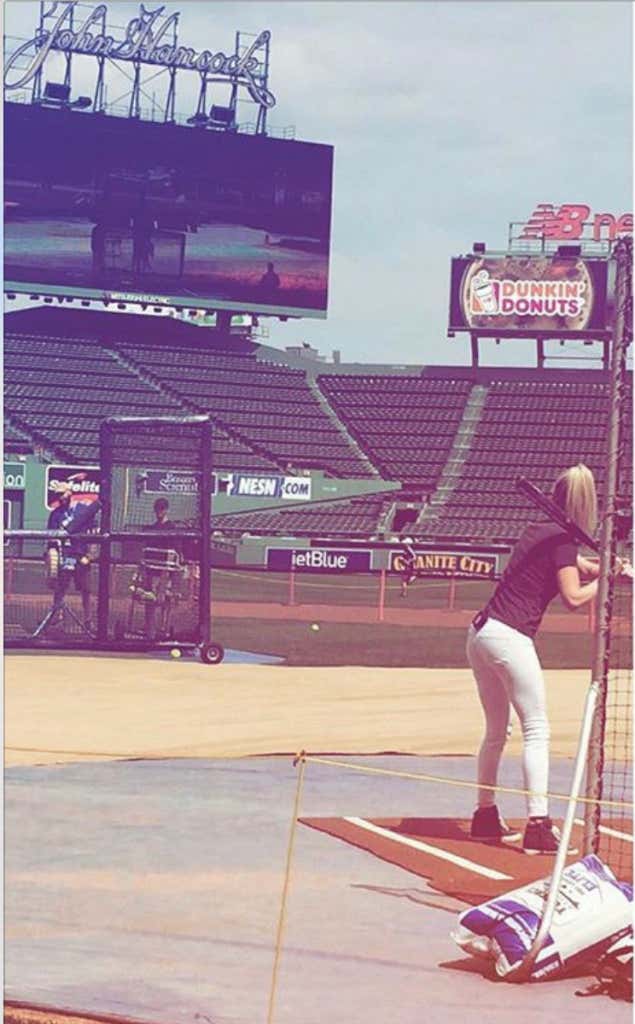 And I didn’t go to Beantown to sit on TV for 30 seconds at a time. I went to talk 3+ hours a night, 5 days a week. They actually wanted my opinions. They were giving me the chance to be something I’d always dreamed of being. I was fucking terrified. Can you imagine being a blonde girl from Texas being thrown into the fire in the most intense and best sports city in the world?? Especially because I grew up loving college football, not really loving professional sports. Sure, I went to games in Dallas and enjoyed every single one, but I didn’t have any where near the passion that people in Boston have. I was sure nobody would take me seriously. I still can’t even believe I was given the opportunity to do it.

But NBC believed I could do it. So I threw myself into everything Boston. I read a bunch of books, listened to sports talk radio, watched documentaries. I did literally anything I could to make sure that I knew what I was talking about. It wasn’t easy, but I knew to succeed I had to live and breathe Boston. And it worked. I’m not for everybody, but I do know that I wasn’t not only welcomed there, I was embraced there. I mean, hell, I was even nominated for two Emmys. 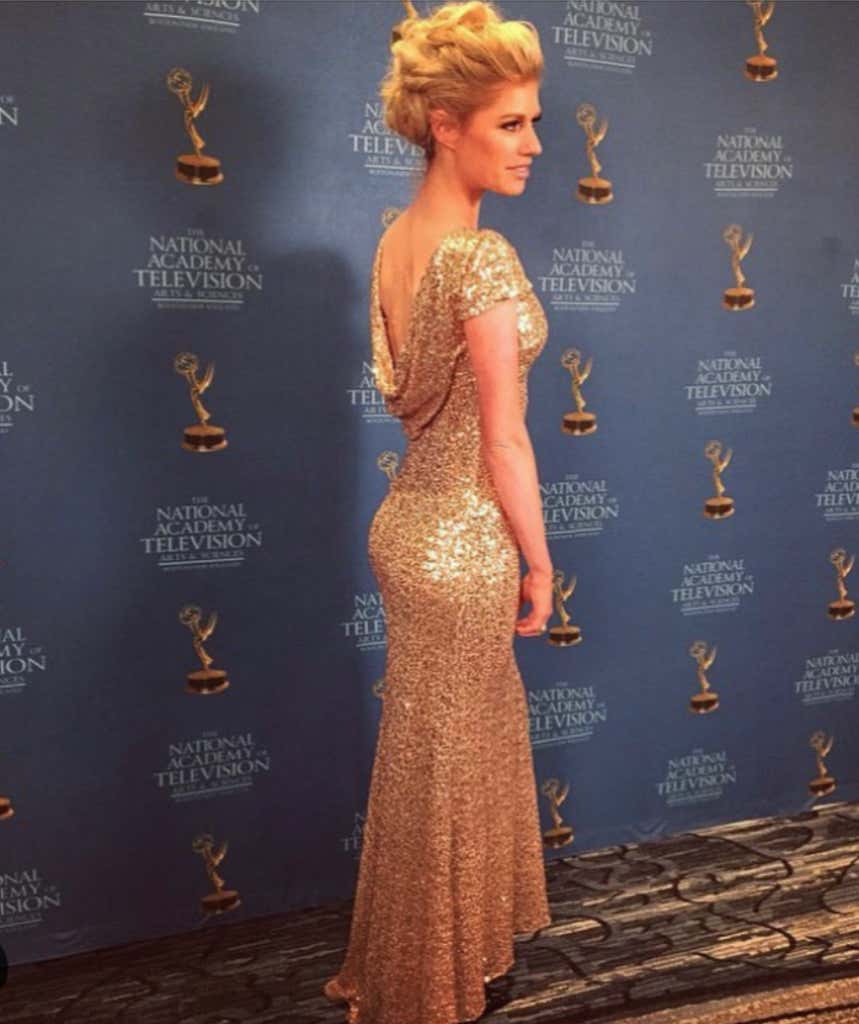 Simply put, I fell in love with that city. Everything about it. I teared up when I walked into Fenway for the first time on Marathon Monday. I was mind blown looking at the crowd for our live Super Bowl shows in Minnesota. I lost my mind when Kyrie Irving was traded to the Celtics. It’s all just so… contagious. I will always love and miss Texas, but Boston gave me life again. Not just in my career, but in my personal life too. It gave me my purpose back. I was finally happy. And it damn sure doesn’t stink that every time I’m back in Boston, people tell me I’m “theirs”.

Not only did I fall in love with Boston, for the most part, it loved me back.

And somewhere in there, I met Dave Portnoy. He knew about my background at ESPN and obviously knew my work in Boston and wanted to meet with me. He told me that he could make me a star. I knew about Barstool Sports and loosely followed it, so I was shocked that one of the most powerful men in sports knew who I was. And wanted to hire me.

It was the hardest decision I’ve ever made to walk away from the job I had in Boston. My coworkers there are still some of the closest people in my life. I loved that job. But I knew that the platform that I had wanted my entire life, the dream I had worked my ass off for was in New York City. People told me I was nuts. How could I possibly leave network TV for a controversial company? Didn’t I know that I’m not “Barstool”? 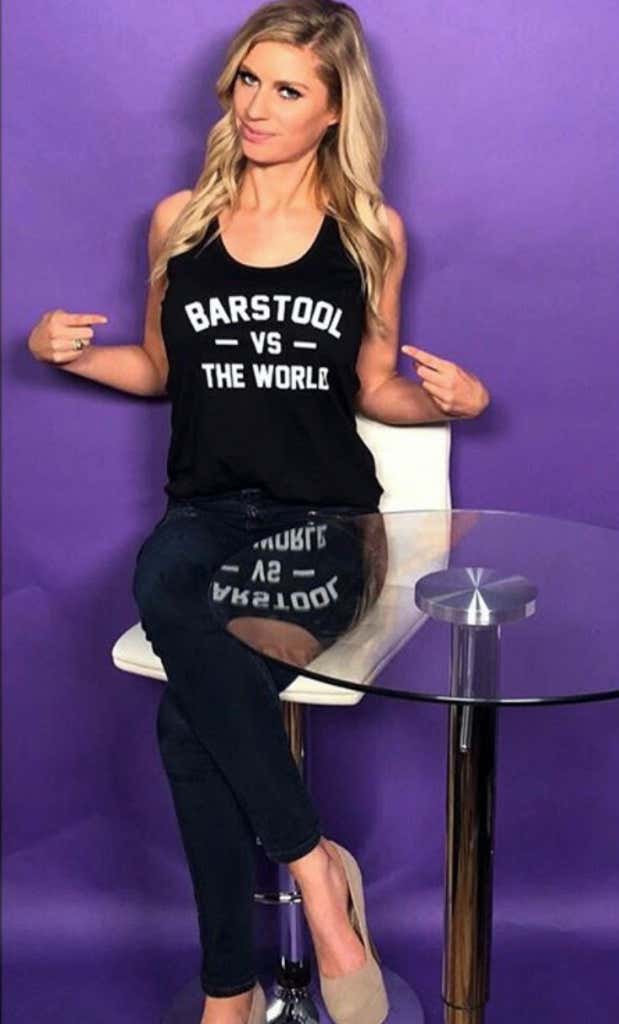 My 20s were full of a ton of happiness and some really bad heartbreak. I don’t like to talk about my personal life publicly. It’s not my thing. But I can say that my personal life is full of the best people in the world. I’m such a lucky girl. I wish I could thank them all individually. But I’m happier than I have ever been and will continue to fight for my dream. That’s what survivors do. Sure, I’m not perfect. I’ll fuck up again. But I have the best intentions in my heart and the passion for my career like I’ve never had before.

Something that’s stuck with me throughout my 20s is to show people that they matter. I needed people to remind me countless times that even though I was a fuck up, even though I hurt them, even though I was depressed… I mattered. So for anybody who’s still reading this, know that you matter. I don’t care if you’re running an empire, a kid heading to school or just trying to put one foot in front of the other today. You fucking matter.

Turning 30 inside Fenway Park means more to me than just a game. I figured I’d be in Vegas, but last night capped off my 20s exactly how I wanted to: in the city that changed my life and my career watching a team that I care about go up 2-0 in the World Series. Without Boston, there would be no Barstool Sports. Both for me and for the world. 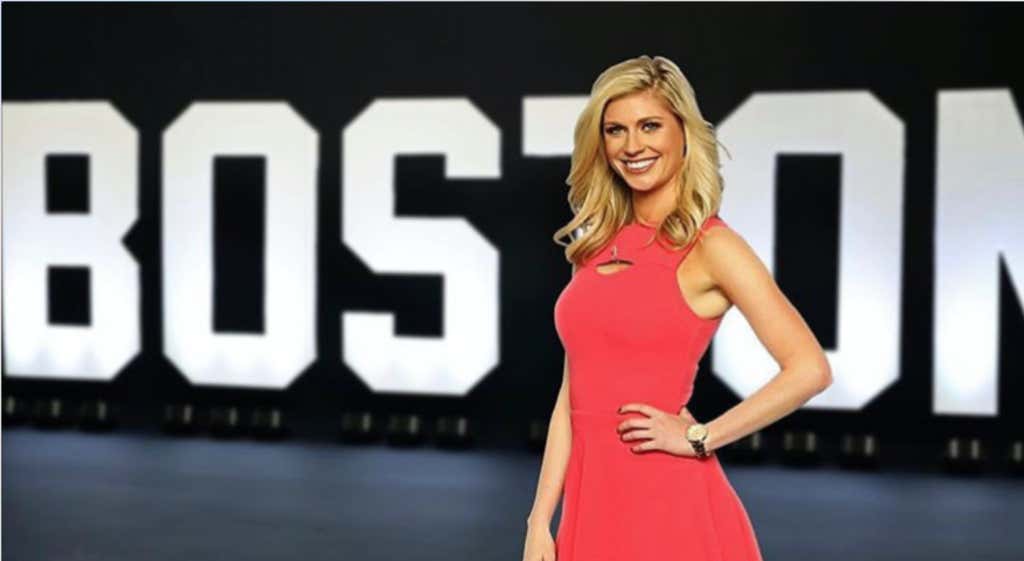