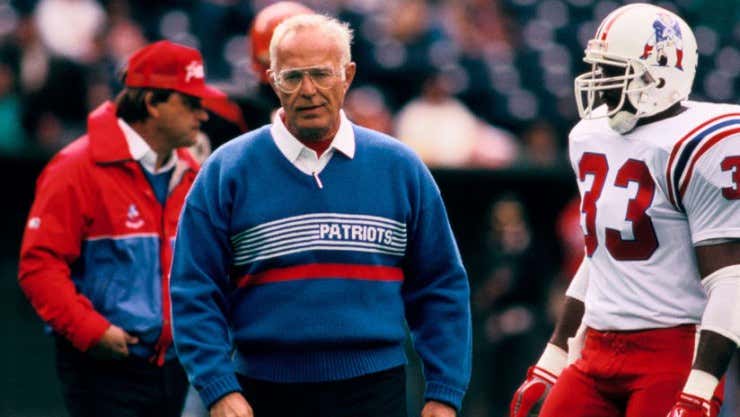 Press Release – The New England Patriots are deeply saddened to learn of the loss of former Patriots head coach Rod Rust, who passed away Tuesday morning at the age of 90.

Rust moved on to coach the Philadelphia Eagles linebackers from 1976-77 before being hired by the Kansas City Chiefs to be their defensive coordinator from 1978-82. He then served in the same position with the New England Patriots for five seasons from 1983-87. His 1985 defensive unit, which ranked third in the AFC, helped the Patriots win the AFC Championship and advance to Super Bowl XX. …

He was named head coach of the New England Patriots on Feb. 27, 1990 and led the team for one season.

Before we form the receiving line at the wake here, thank you. Thanks for coming. I know it’s a lot for you to be here. As clickbait headlines go, “Old Coach You’re Not Familiar With Dies” is not exactly “She Didn’t Realize Why the Crowd Kept Cheering” or “Grading the Newest Sex Scandal Teacher” for effectiveness. But seeing as I got a book published that covers the subject (cha-ching!), I feel it’s my duty to blog about it.

That said, the Patriots must have a genius working for them who writes obituaries because that is a masterpiece of emphasizing the positive and eliminating the negative. Yes, Rod Rust served his country and was a long time defensive assistant who worked his way up to the Patriots head coaching job in 1990. Left unsaid is that he went 1-15. Then got fired. And then instantly became the Patron Saint of Good Coordinators Who Aren’t Head Coaching Material in perpetuity.

But believe it or not, 1-15 doesn’t even begin to tell the story of how bad the 1990 Patriots were. Offensively, they scored the fewest points in the NFL by a wide margin. Defensively, they gave up the second fewest, but gave up the most rushing yards by a margin of 300. They lost in Week 3 by a score of 41-7. In early November, by 48-20. There was a 37-7 mixed in there. They lost a late December game 42-7. Rust’s 1990 Pats were a blowout factory and they were working three shifts.

The low point actually came after a Week 14 loss when Rust infamously said “I’m proud of my team’s effort today.” After losing to Pittsburgh 24-3. Which caused the entire population of New England who was still paying attention – all 150 of us – to say with one voice, “Proud of the effort??? How bad would you have to get beat to be ashamed of it?” And from that moment on, Rust was dunzo.

And if you’re wondering whether that 1-15 debacle at least produced a No. 1 draft pick that did some good, you’d be right. It did. For Dallas. The Patriots traded it to Jimmy Johnson and Jerry Jones who used it to take Russell Maryland and start building the Cowboys dynasty of the early 90s. Because those were the Patriots for most of my life.

Not to take too deep a dive into it because it’s a long story, but it was also on Rust’s watch that the Pats hit their lowest of low points that in a roundabout way ultimately turned the franchise around. That was when backup tight end Zeke Mowatt went up to a female reporter in the locker room, waved his dong in her face and asked if she wanted to kiss it. The ensuing firestorm created a national discussion (something the Patriots of the time never, ever did) about women in the locker rooms and sexism that made the NFL look awful. Ultimately the other owners pressured the terrible Patriots owner to sell to a guy who cleaned house, fired everyone, hired Bill Parcells who drafted Drew Bledsoe and the rest, as they say, is history. Glorious, successful history. That might never have happened with a more competent head coach in charge.

Lastly (and thanks again for stopping by, it’s really appreciated) I chose my words carefully. Rod Rust was the “least successful” coach the team has ever had, not the “worst.” Rust at least was a sane and decent man who was well thought of but just was in over his head running a bad team with abysmal management. The worst coach they’ve ever had might have been Clive Rush from the AFL days, who had a nervous breakdown. Quite literally. Coaching the 1960s Patriots landed him in an institution like the one Ray Finkel went to.

But out of respect for the mentally ill, I’ll go with Ron Meyer (1982-84), who was a straight up asshole. That would be the Ron Meyer who got SMU the Death Penalty but left the program one step ahead of the NCAA posse. A weasel who loved the sound of his own voice but would sit in on positional meetings for five minutes then say “Well it sounds like you got this” and leave. Not because he liked to delegate to his assistant, but because he didn’t know the first fucking thing about what their schemes and gameplans were. John Hannah has admitted he once phyysically chased Meyer around the stadium because he caught him in a lie and wanted to kill him. While Meyer ran and hid. Again, the Pats of my youth.

So sincere thoughts and prayers for a good man who was simply unable to do a job that was probably impossible in the first place. God bless Rod Rust’s soul. And as always, thank God we have it so good after having it so bad for so long. RIP.

P.S. Those old uniforms were the balls though, no question. Thanks once again for showing up I know you’re busy. Drive safe.