Chris Lavish, 26, from New York, gave an interview to The Cut, in which he’s described as an ‘Influencer and Digital Director’.

Chris was interviewed on his way to Matcha Bar where he’s been given a corporate card after constantly posting snaps of its $15 CBD lattes on Instagram. One of Matcha Bar’s slogan, which can be found on its energy drinks, is ‘Good Things Come To Those Who Hustle’, which Chris deemed ‘so me’.

Chris, who has more than 33,000 followers on Instagram, said making jokes about his ex on the platform has helped him look ‘authentic’. 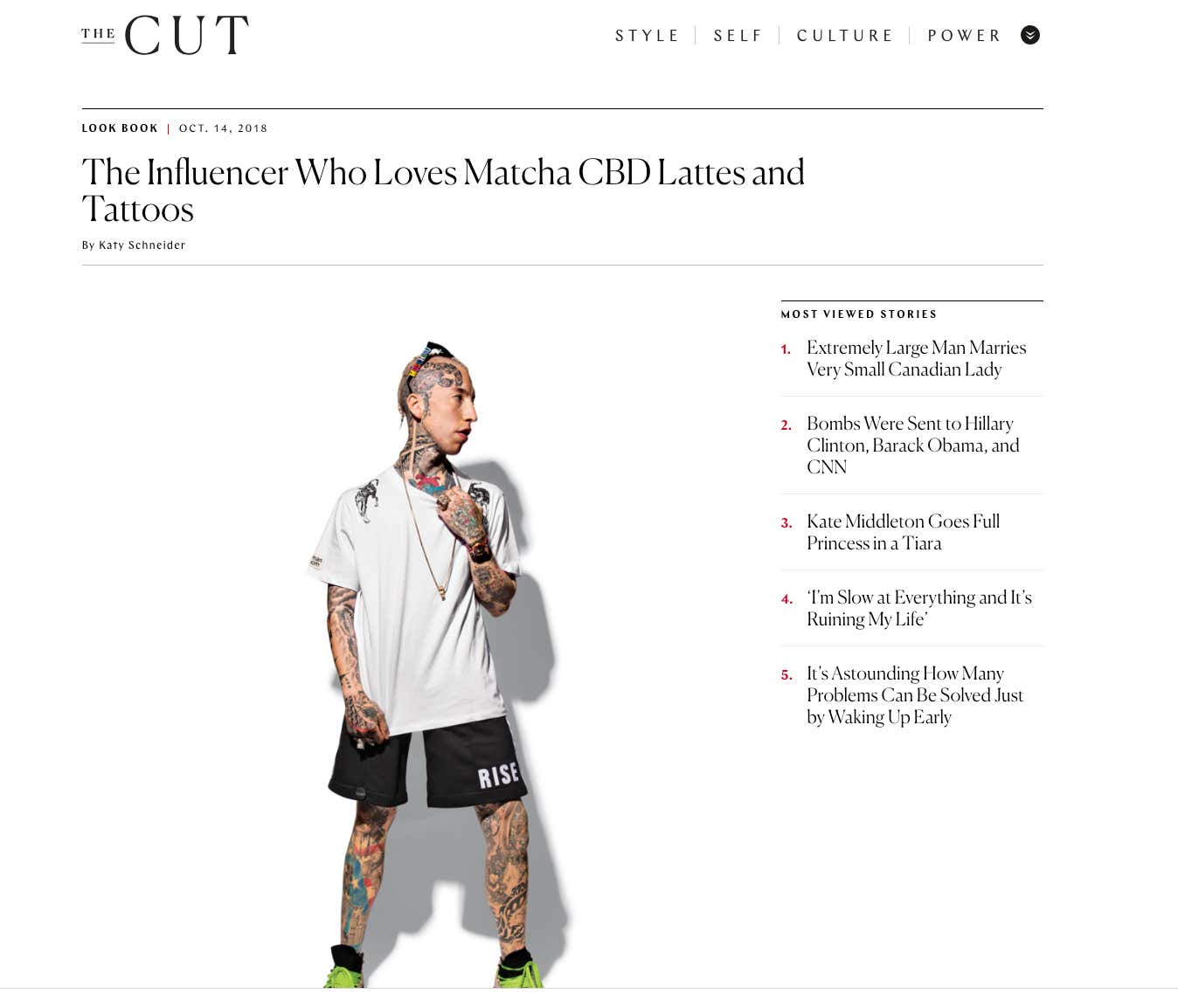 Oh no.  Oh no no no.  I’ve been very vocal in my support and defense of millennials, but this may be, as Malcolm Gladwell says, “the tipping point.” 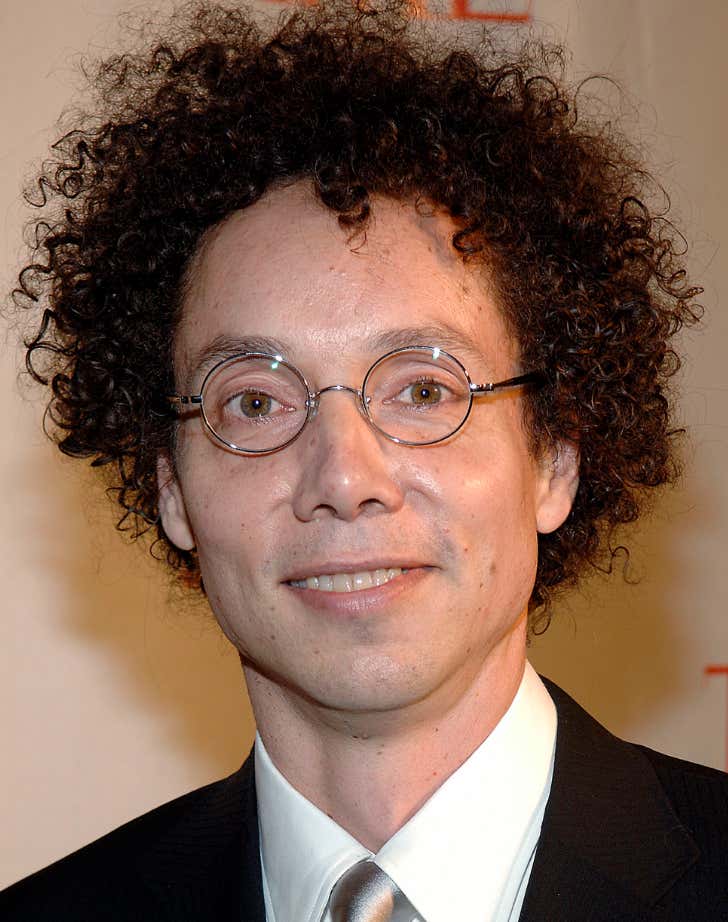 If “ideas spread like viruses,” then Vegan Social Influencer Chris Lavish is like polio, measles and mumps injected directly into my bloodstream.

If “The Law of the Few” is correct, then Chris Lavish is the one with the rare and particular set of skills to make us hate an entire generation.

Vegan Social Influencer Chris Lavish has the Stickiness Factor and the Power of Context to be the Salesman that destroys any ounce of respect anyone ever had for millennials.

For real though, I don’t want to be a hater.  I don’t like shitting on people without ever having met them in person.  Maybe this dude is super nice and spends all his free time building playgrounds for underprivileged youth.  Okay, so I’m going to switch gears here, right in the middle of my stream of consciousness blog, and give him a chance.  Maybe I shouldn’t judge a book by its cover.  Let’s see what he has to say.

During the interview, Lavish said that he chooses to wear sunglasses “because it’s very invasive for somebody to look you straight in the eye,” continuing, “Like, who let you into my eyes? Who let you in there?”

Okay I can dig that.  Especially living in NYC.  Making eye contact on the street is a cardinal sin.  You keep that head down and only look up in brief glances to make sure you’re not going to truck some old lady.  Even in normal conversation I don’t like people looking me in my eyes.  Who let you in my eyes?  Maybe I need some big Gucci shades too.

This one is good too:

I don’t watch TV. No plays, no books. The last movie I saw is … well, I’d rather not tell you. Okay, it was Avatar. In the theater. I just write emails and travel for work. I’m barely home; I’m always at JFK. I’m vegan and straight edge. Getting tattoos is how I relax. It’s my therapy.

I watch TV, I read books, I watch a lot of movies, I hate Avatar.  I’m not vegan but I’m like, medium straight edge, slightly crooked edged.  I don’t have any tattoos but I really want one, I just don’t have anything meaningful enough to me.

Favorite sport: “I used to play basketball. Ball used to be life. I watch when I can, though I recently threw my television out.”

Speaking of life, his lifestyle is pretty sweet:

Where are you headed?
MatchaBar. They sponsor me. I was going there all the time, ordering this $15 CBD latte, and then posting pictures of it to Instagram. Finally, the owner gave me a corporate card in exchange for a couple of posts a week. Their slogan is “Good things come to those who hustle” — when I first saw that, I was like, Wow, that is so me.

I don’t like Matcha and CBD doesn’t do anything except make me sleepy – maybe I could try to hustle hard enough to get a corporate card for Old Fashioneds at NoMad Bar?  Wow, that would be so me.

So maybe this guy isn’t so bad after all.  Let the haters hate. 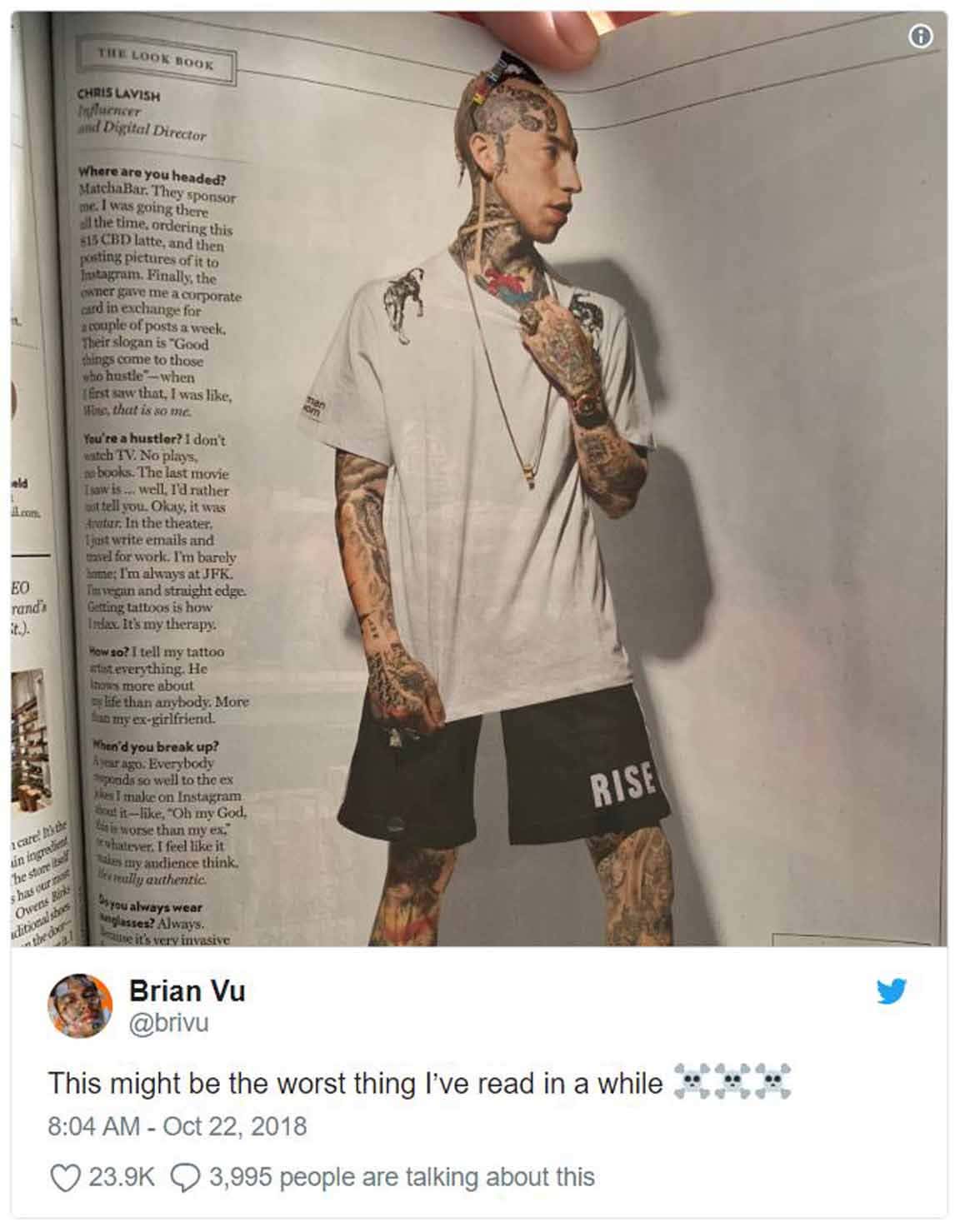 This is actually a dope sweatshirt.  I might steal this to sell in the store. 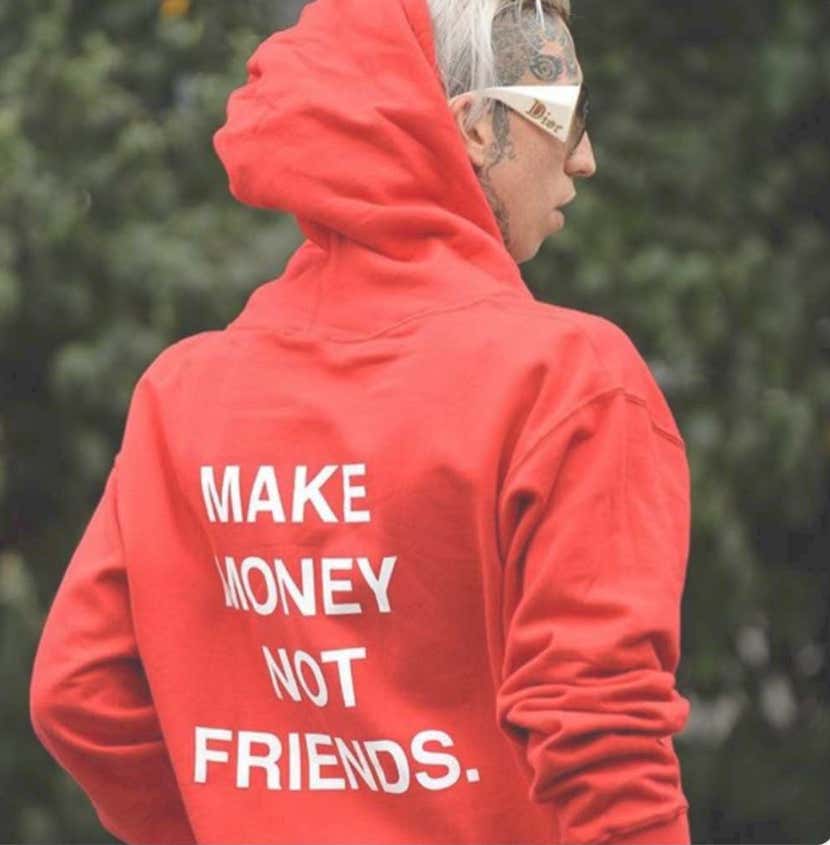