Yesterday afternoon, the New York Giants dealt their 2016 1st round cornerback Eli Apple to New Orleans for the Saints 2019 4th round pick and a 2020 7th rounder. While Apple has been less than impressive, and perhaps more of a headache, during his three year tenure in New York, his departure meant more to the Giants organization than picking up a couple future late round selections. The message was heard loud and clear throughout the league: the New York Giants are open for business. 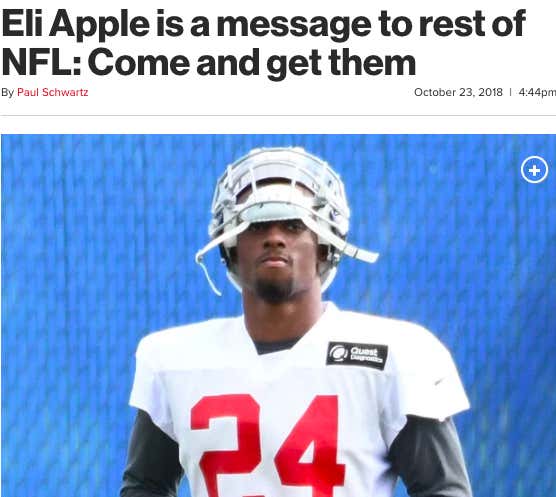 Open for business??? I saw Snacks Harrison got traded this morning, too. So do you mean like, anyone? Well in that case, let’s talk about the most talented player on the Giants roster, Odell Beckham Jr. 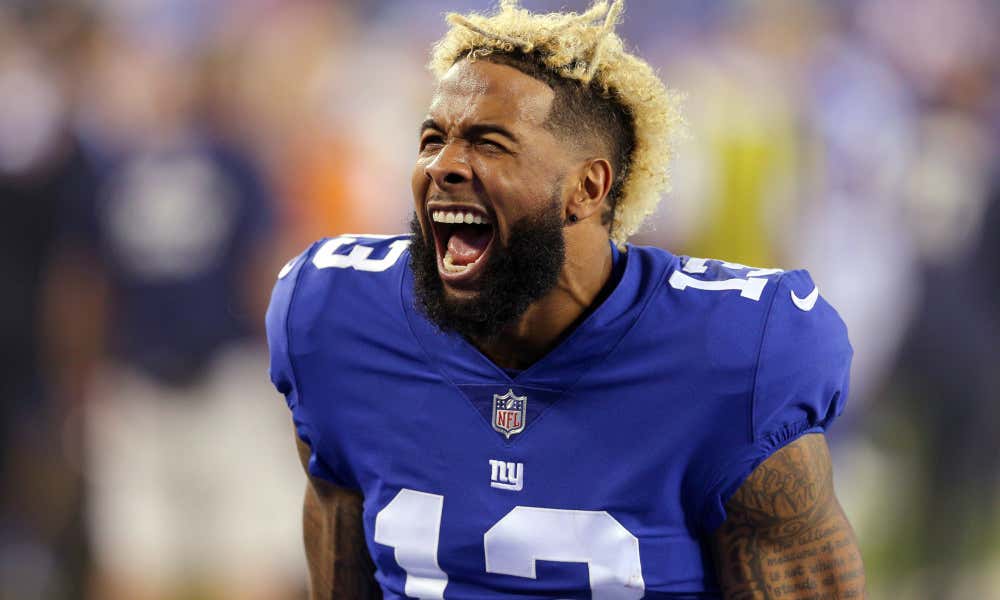 Without question he is the most talented player on the Giants roster, if not the most talented player in the entire league. But he is also unquestionably the biggest headache in the game as well. To say he doesn’t photograph well would be an understatement.  To begin, there was the peeing like a dog touchdown celebration. Nothing to get ruffled feathers over, but not a great look. 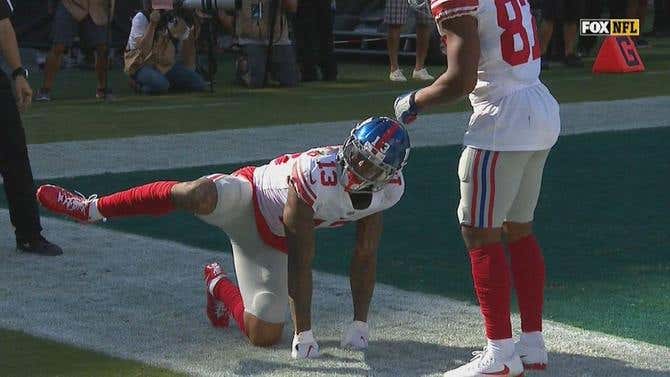 And we had the great postseason boat trip in Miami, just six days before the Giants playoff loss against the Packers. 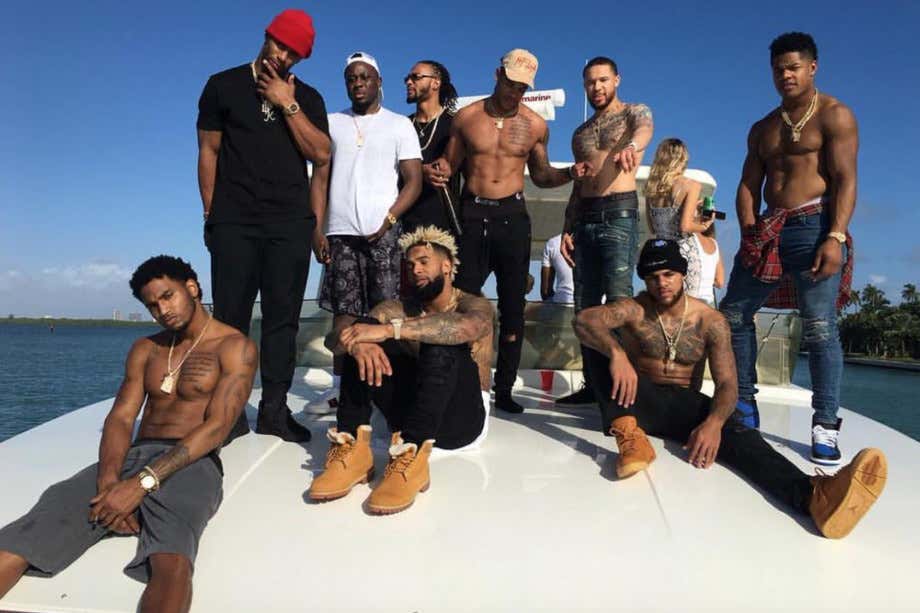 No one can forget the pizza party in bed that looked like it included some marijuana and cocaine. 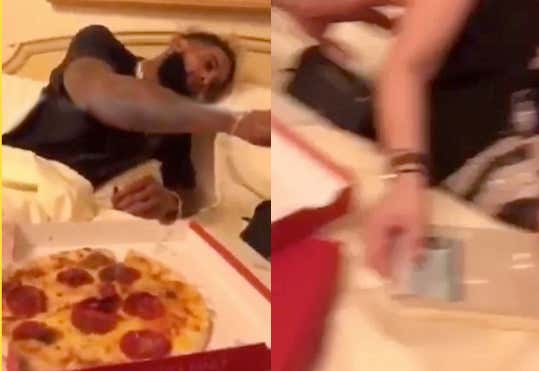 And of course we have had multiple instances of anger issues, like his post game hole punch and his mid-game net punch. 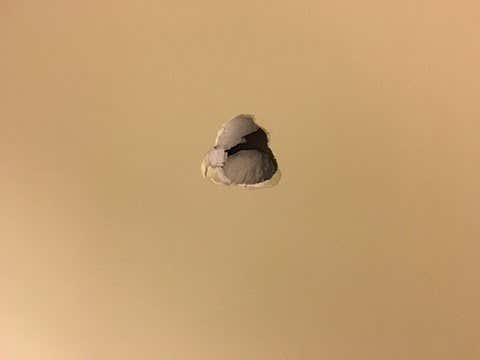 After so many instances, the Giants organization has to be questioning whether his production is worth his antics. After a 1-6 start to this season following a 3-13 record last year, the answer is probably no. Regardless, the pressure of having a star in New York forced the Giants to pony up and sign Beckham to a 5-year, $95 contract extension this offseason, making him the highest paid receiver in the league. Now, with the Giants opening up their cupboard and taking offers on anyone and everyone, there have to be teams calling about getting OBJ for the next four and a half seasons. And it just so happens that one of those teams that should be interested is my team, the Cleveland Browns. 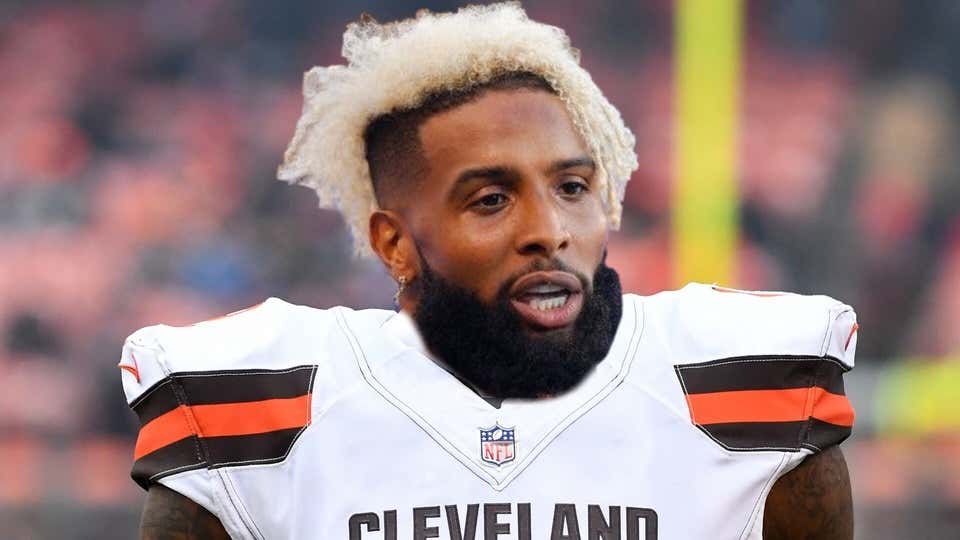 Here’s five reasons why Cleveland should make a serious inquiry about bringing Odell Beckham Jr. to the Dawg Pound.

1. We Have the Necessary Trading Pieces

OBJ is the most talented player in the league, and he just signed a 5-year deal this offseason. Regardless of his perceived attitude issues, it is going to take a pretty enticing package to lure him away from New York. That doesn’t mean it’s not doable though. And if anyone can do it, it’s the draft pick piling Cleveland Browns. In just the upcoming 2019 Draft, the Browns have their 7 selections (in presumably a pretty high slot), the Patriots 3rd rounder, and the Jags AND Patriots 5th rounders. I don’t know what the asking price would be for a talent like Beckham’s, but I know it would take a lot of draft picks. The Browns definitely have those. 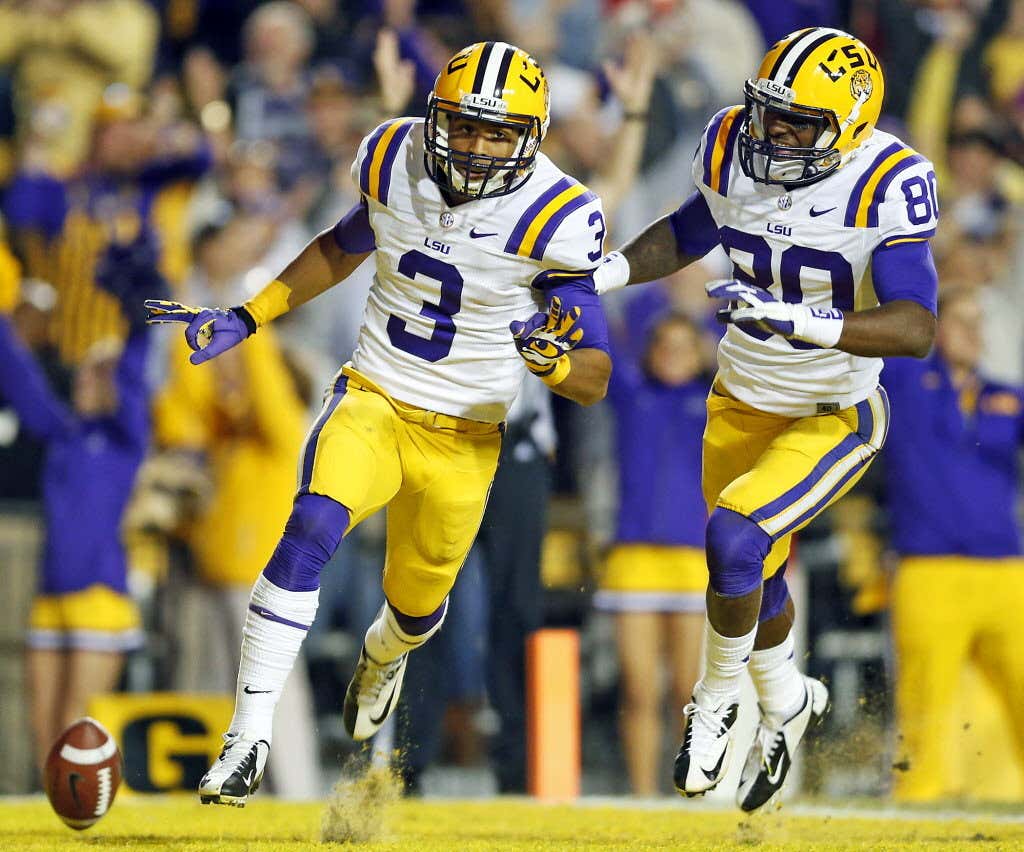 Current Browns receiver Jarvis Landry played alongside Beckham in college, where the duo became extremely close at LSU. They refer to each other as their brother today, and Landry said this summer that he talks to Beckham daily. Landry also said he has lobbied for the Browns to trade for OBJ, and that Giants star would “definitely” be open to coming to the Browns. Would playing alongside his brother be enough to keep Odell’s attitude in check? Also, Landry and Beckham’s former position coach is now in his 1st year as the Browns receivers coach. Coincidence? Or a ploy to eventually land the two stars together? As crazy as it seems, it sounds like the big city star may enjoy his time more in Cleveland! 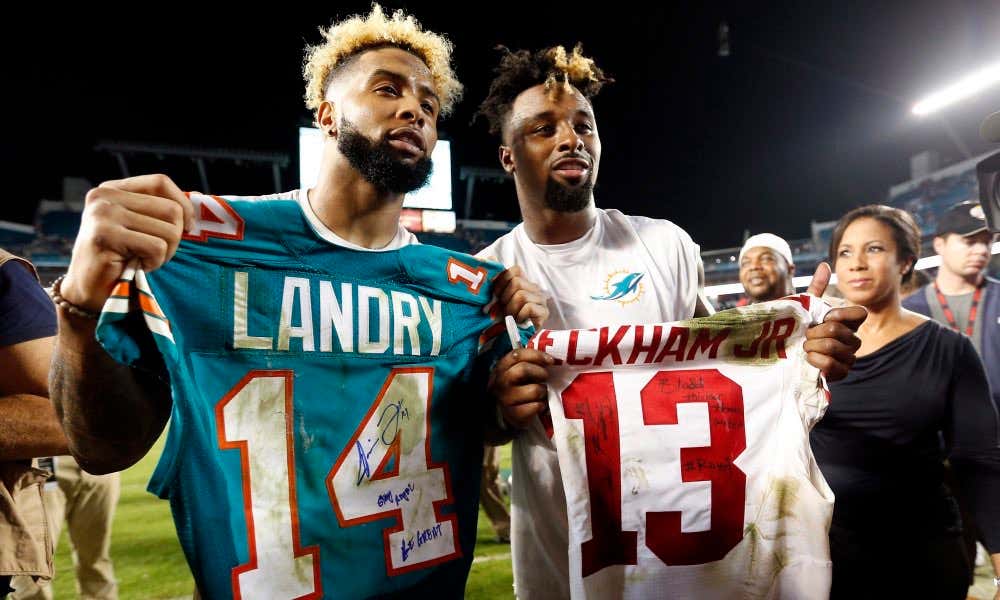 3. The Browns Can Afford Him

Many teams cannot just add on a player that has a contract worth $90 million, but the Browns are in a position to do so from an economics perspective. First of all, Beckham’s contract is only guaranteed for the first three years, meaning they could see it as a 3-year deal worth just over $15 million a year. Second of all, the Browns have the most cap space in the league by a pretty wide margin. Reports show that we’ll still be in the top five of salary cap in 2019, so the money is there if the Browns choose to spend it on another star receiver.

4. Look at That Offense!

I may have jumped the gun earlier this season and anointed Baker more valuable than Wentz and Goff, but hey, fan is short for fanatic. The Browns were 2-2-1 ladies and gentlemen. But now, at 2-4-1, the season seems to be stalling. Let me tell you what would not be stalling though, and that is the young, explosive offense we would have if the Browns bring OBJ to Cleveland. Baker at quarterback, Nick Chubb in the backfield, Landry and Beckham on the outside, and David Njoku at tight end. There is no question that that offense would be electric, and they would be so YOUNG. Baker and Chubb are rookies. People forget that Jarvis Landry and Odell Beckham Jr. are only 25! And Njoku was a 1st rounder in 2017. This offense could be very good, and it could be around for a very long time.

5. Our Defense is Ready Now… 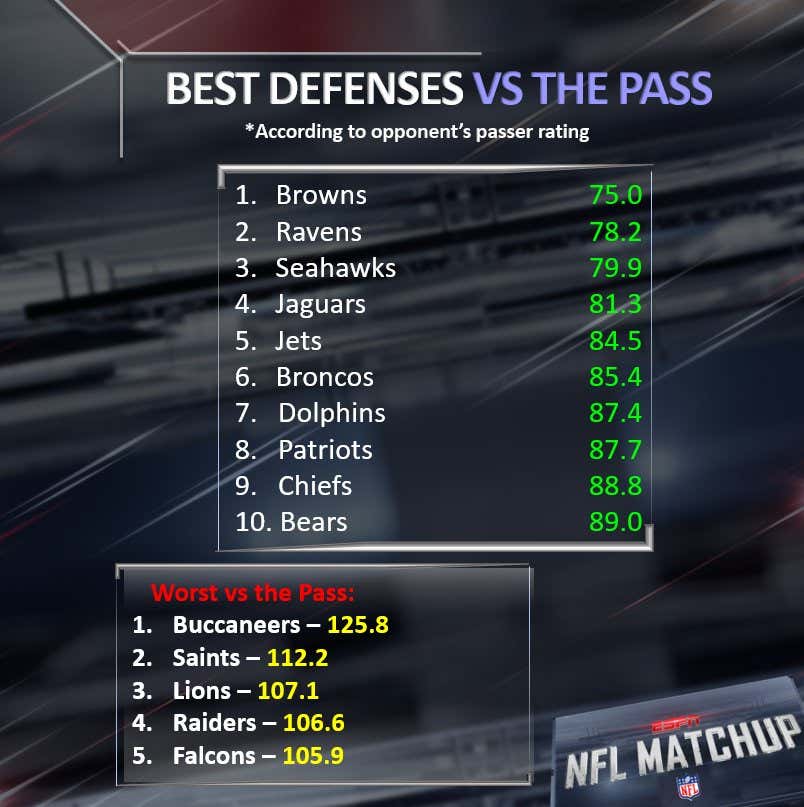 #1 against the pass in a passing league? The Browns defense has shown through it’s ability to stop the air attack and force turnovers that they are playoff caliber this year. Myles Garrett looks every bit of a #1 overall pick, and Denzel Ward is proving the haters wrong one by one. The problem is that our offense and special teams are putting them into tough situations, and it’s tough for any defense to bail you out time after time. That being said, if the Browns offense were to suddenly be able to move the football, then the defense would improve too. Help the offense help the defense, Mr. Dorsey. 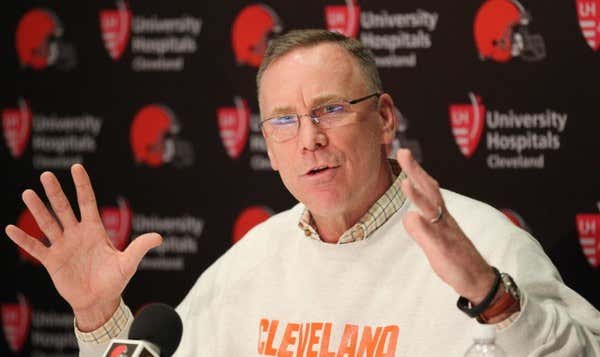 Look, Schefter reported this summer that it would take at least two first-rounders to get the deal done, so teams should only make this type of trade if they feel it is going to push them over the top and make them a championship contender. Does Odell Beckham make the Browns a Super Bowl contender? Eh, probably not. But it would make us a playoff contender, and that would be worth it for everyone in the city and the organization. Beckham makes Cleveland’s offense a whole lot more explosive, and on top of that, it would help Baker Mayfield’s development tremendously. Cleveland is a place where rookie quarterbacks go to die. With Landry and Beckham on the outside, Baker would find early success a whole lot more often than his predecessors. We have the ability to make it happen, so let’s go get him. If Dorsey drafts as well as they say he does, the plethora of late round picks could make up for our absence of early picks. Let’s mortgage the future on Odell Beckham Jr. What’s the worst that could happen?