Pitchfork   – Greta Van Fleet sound like they did weed exactly once, called the cops, and tried to record a Led Zeppelin album before they arrested themselves. The poor kids from Frankenmuth, Michigan don’t even realize they’re more of an algorithmic fever dream than an actual rock band. While they’re selling out shows all over the world, somewhere in a boardroom, a half-dozen people are figuring out just how, exactly, Jimmy Page and Robert Plant are supposed to fit into the SUV with the rest of the Greta Van Fleet boys on “Carpool Karaoke.”

So the Greta Van Fleet album dropped on Friday much to the delight of people who like rock and just music in general.   It’s like an awesome new version of Led Zeppelin and refreshing for people who (like myself) are overloaded with electro-pop and generic rap that is dominating the airwaves and Spotify streams.  And while it usually takes them about a week or two to listen, Pitchfork, the internet leader in music reviews, rushed to the press with their breakdown of the album.

Though their debut album, Anthem of the Peaceful Army, sounds like a bona fide classic rock record—with its fuzzy bass, electric sitar solos, and lyrics featuring the kind of self-actualized transcendence brought on by a few too many multivitamins—it is not actually classic rock. They are a new kind of vampiric band who’s there to catch the runoff of original classic rock using streaming services’ data-driven business model. Greta Van Fleet exist to be swallowed into the algorithm’s churn and rack up plays, of which they already have hundreds of millions…

…What they lack in self-awareness they more than make up for in rigid self-consciousness, failing to make any fun or campy choices to lift these songs out of a morass of the worst impulses of Rush and Cream.

…None of this lysergic-sexual thinking is within the band’s grasp, they are just swatting at crusty platitudes and copy-pasting old mythos hoping no one notices that they are too small, too inept to even put forth one meaningful, specific, original idea.

…But for as retro as Anthem of the Peaceful Army may seem, in actuality, it is the future. It’s proof of concept that in the streaming and algorithm economy, a band doesn’t need to really capture the past, it just needs to come close enough so that a computer can assign it to its definite article. The more unique it sounds, the less chance it has to be placed alongside what you already love. So when the Greta Van Fleet of your favorite artist finally lands on your morning playlist, spark up a bowl of nostalgia and enjoy the self-satisfied buzz of recognizing something you already know. It’s the cheapest high in music.

Everybody who knows Pitchfork knows they are as snobby about music as it gets.  For those who aren’t familiar, picture your annoying friend who is always criticizing your music taste and grabbing the aux cord at the party to put on some deep house from an unknown DJ in Sweden who is experimenting with sound.

They downgrade ratings if people are mean to their writers.  They literally end careers with bad reviews that they don’t even bother to write, they just use emojis.  For Jet’s “Shine On,” they gave it a 0.0 and the review was a video of a monkey peeing in its own mouth.

There’s something intuitively dead-on about the German duo’s exquisite production, the way their sinuous melodies and weedy synth riffs slide like plasma over the surface of their thick grooves, as if all recent German house and techno had been distilled into a single, charming sonic signature.

And this, about R.Kelly:

But while the album contains enough “Did ya hear that?!” couplets to keep even the worst Technorati slut stocked with catchphrases for weeks, such one-off bits and scenes lack the repeatability of more traditional pop smashes. Luckily, Kells provides a couple of those, too; “I’m a Flirt” (Remix) and “Hook It Up” are relatively light on guffaws, but they’re both equipped with warm, forever-bounce beats that defy gimmicky plot twists, age, dubious morality, and shameless fuckaphores.

About St. Vincent:  “The chorus, which transforms the verses’ funk-by-Mondrian into something more cathedral-shaped, addresses this via a mini-thinkpiece on selfiehood, contrasting everyday acts shot to be witnessed with the need for (private) confession.”

About Taylor Swift:  “Most stunning of all is a guitar figure that scribbles its own story of indefinite lust across the night sky.”

They are brilliant writers.  They know more about music than you know about any subject on Earth.  And they’re genius for acting the way they do, because they exist just to rile people up – and nothing riles people up like you dissing the music they like.  Which, as Clickbait Smitty has so efficiently pointed out recently, is just another way to generate clicks.  Troll people enough to keep them coming back for more hate.  They absolutely thought this album was like…a 7.0.  Maybe 6.5.  But they knew what it would do to cause a stir, so they went with a 1.6 and opened their gates for the haters to flood in.

This is when I officially bailed on them by the way: 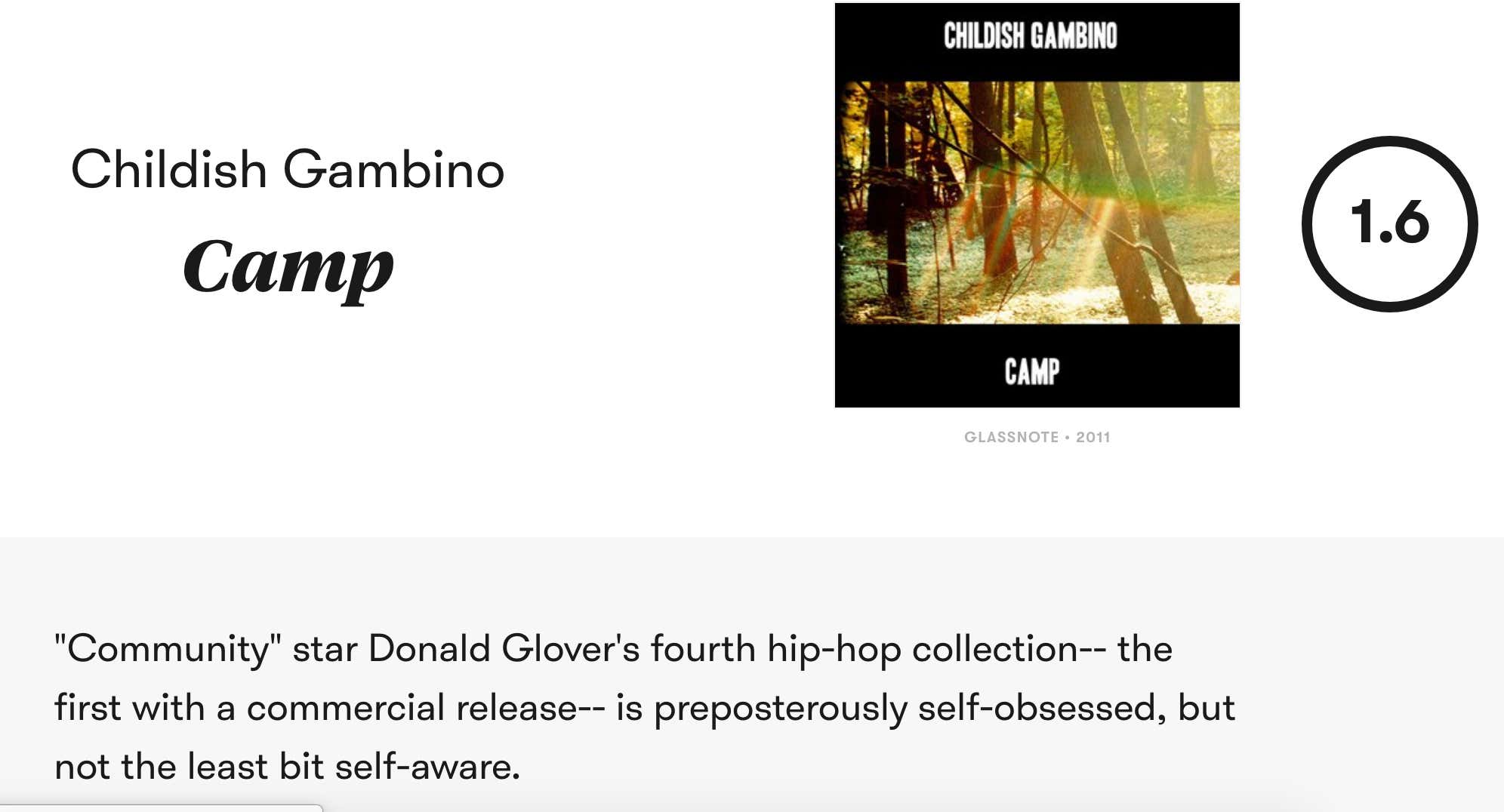 This was a travesty as well: 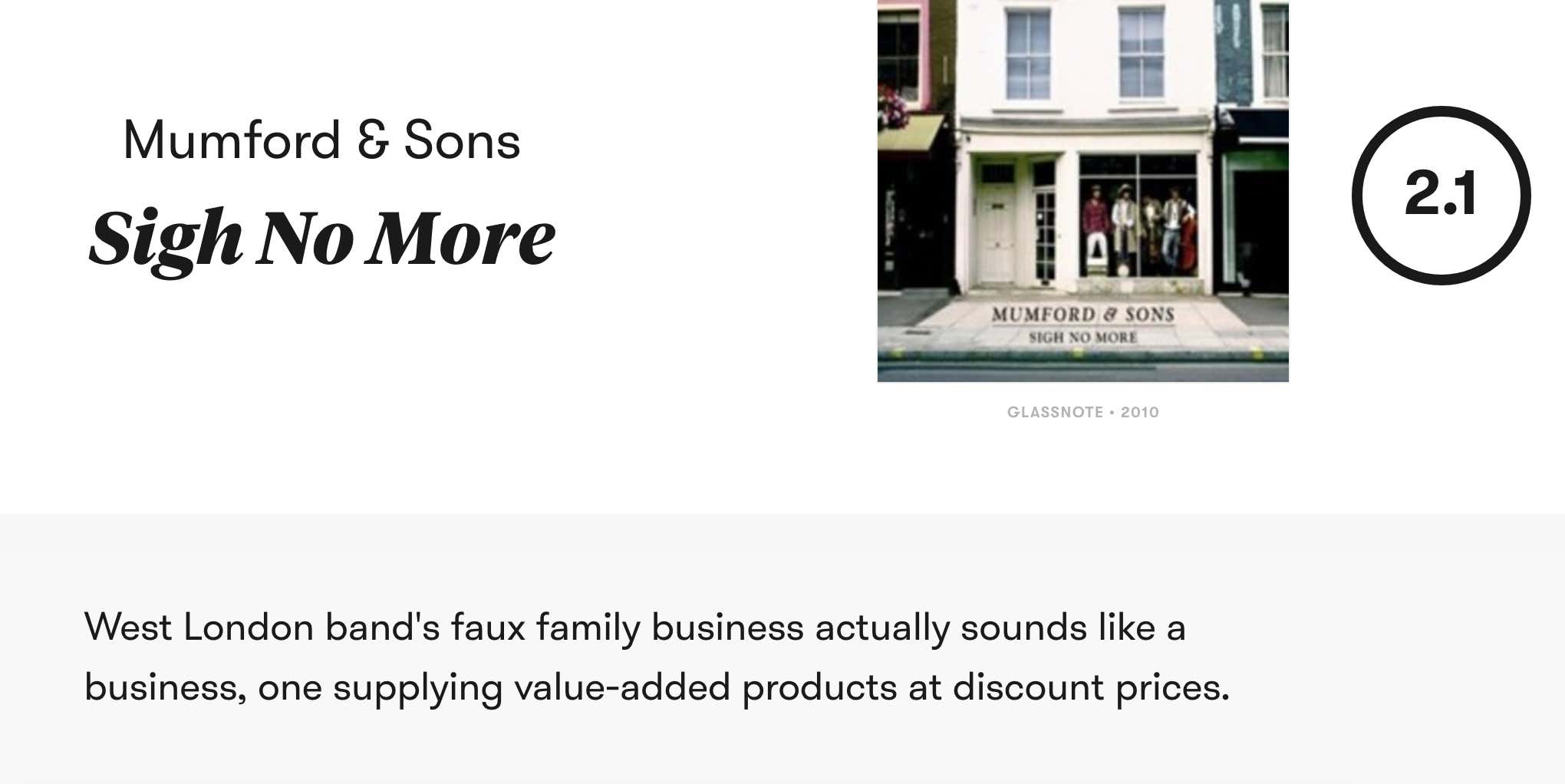 There is a direct correlation between how popular a band is with the mainstream and how much Pitchfork hates them.  So I guess Greta Van Fleet got too much love?  Maybe they read Robbie’s blog about how they’re going to “save rock and roll” and decided they had to step in and shit on the excitement?

Who knows.  All I know is this album fucks.