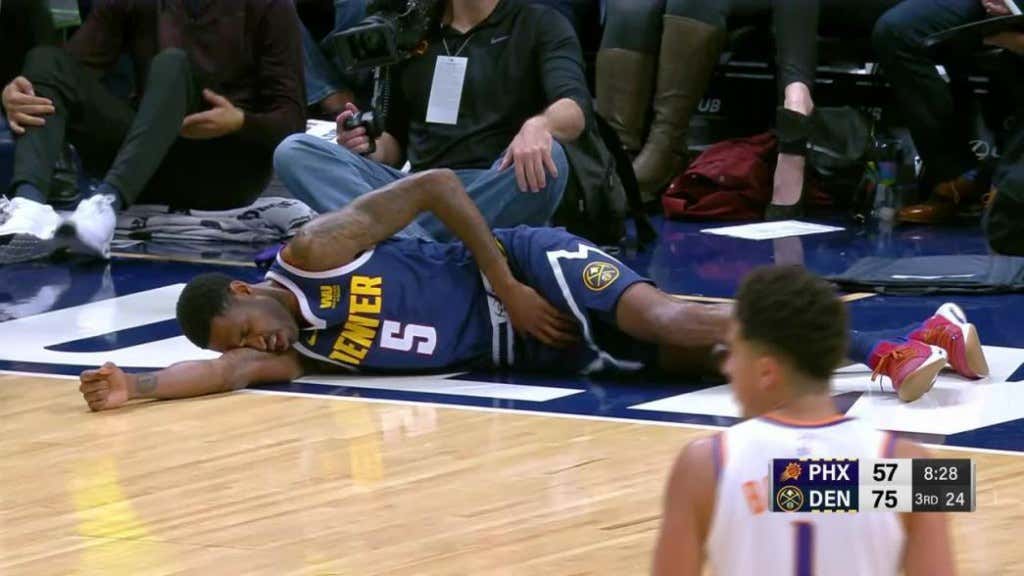 All things considered, this is a huge sigh of relief for the Nuggets and their fans. Anytime a guy talks about hearing a pop and needs a stretcher to get off the floor, it’s usually never good news. So the fact that Will Barton is walking away with just a hip and core strain is gigantic news. You don’t want to mess around with hip injuries, just ask his teammate Isaiah Thomas, and while you may be saying to yourself “Greenie, who the fuck cares about Will Barton”, well that just means you don’t watch a lot of Nuggets basketball. Even so far in this early season, the early sample size will tell you he makes a real impact and is a key player in that Denver rotation

Not to mention he’s in the first year of his new 4/53M extension. He had a breakout year last year for the Nuggets, starting a career high 40 games and throwing up 15.7/5.0/4.1 on 45/37% splits making 1.9 3PM a night. He was off to an equally good start this year, with 16.5/5.0/3.0 averages on 57/55% splits and 2.5 3PM before getting hurt. At 28 years old, I feel like it would be safe to say he’s smack in the middle of his prime, and again, he’s an important piece for this team. Torrey Craig got the start for them last night and he didn’t exactly blow your dick off with his 5 points on 2-5 shooting in 27 minutes, and with Michael Porter Jr still on the shelf, it’s fair to say the Nuggets may be a little thin at the wing for a little while until Barton gets back.

What it does do is give guys like third year SG Malik Beasley a prime opportunity. He has good size at 6’5, and showed flashes during the summer league, but on the NBA level he really hasn’t done much after being selected 19th by the Nuggets in 2016. Fortunately the Nuggets are capable of dropping 120 no matter who is in the lineup so I’m thinking they’ll figure out a way to make up the difference, but it’s for sure something to keep an eye on. They’ve gotten out to a great start this season being one of the three undefeated teams left in the West, and hopefully Barton isn’t out too long because anyone who watches Nuggets basketball will tell you he’s a fun ass player