Seven weeks into the season, the dust finally seems to be settling on the commotion that the beginning of college football brings. Teams start out 0-1 (Michigan and Texas) and the world seems to be falling. Teams start off 4-0 (Penn State) and everyone thinks they are some sort of Elite program. There will be many more twists and turns along the way in regards to upsets, conference championships, and the College Football Playoff, but one race that has become very clear as of late is the one for the Heisman Trophy. Tua Tagovailoa (Alabama), Dwayne Haskins (Ohio State), and Kyler Murray (Oklahoma) are the only three players in the country that still have a shot at winning the award. All three started near the top and have remained at the top, while the rest of the contenders have dropped off like flies. Let’s take a look those who have come and gone throughout the first half of the season. 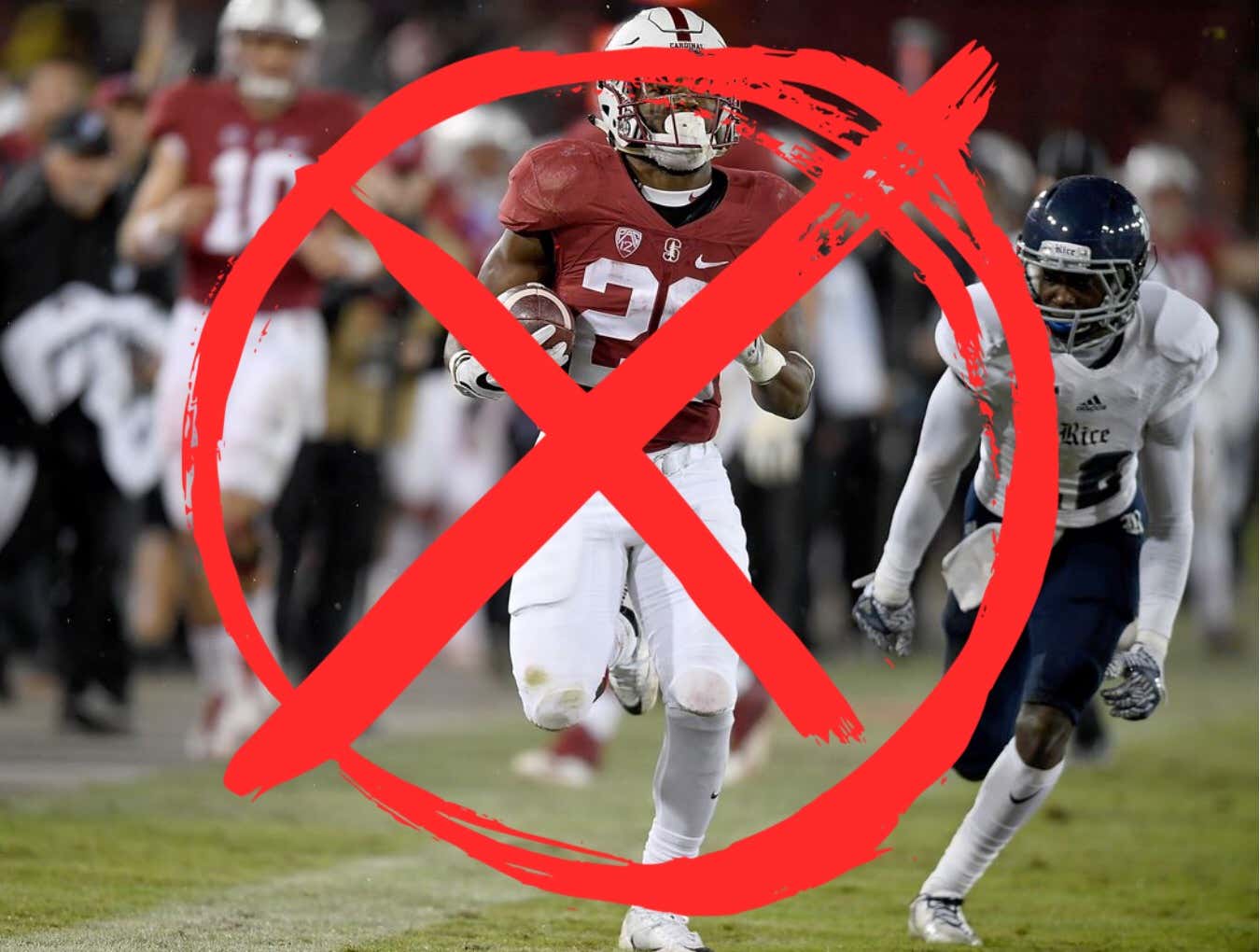 Some will say that injuries knocked Love out of contention, as he has already missed two games this year and is questionable for tonight’s game at Arizona State. However, like I said at the beginning of the season, this award has become one for quarterbacks and quarterbacks only. Seven of the last eight winners have been from the quarterback position. And on top of that, what could Love do better than his 2100 yard and 19 touchdown season last year? The supposed front runner had no chance from the get go. His performance thus far this season backs that up too, as he has 327 yards and 3 touchdowns through 6 Stanford games. 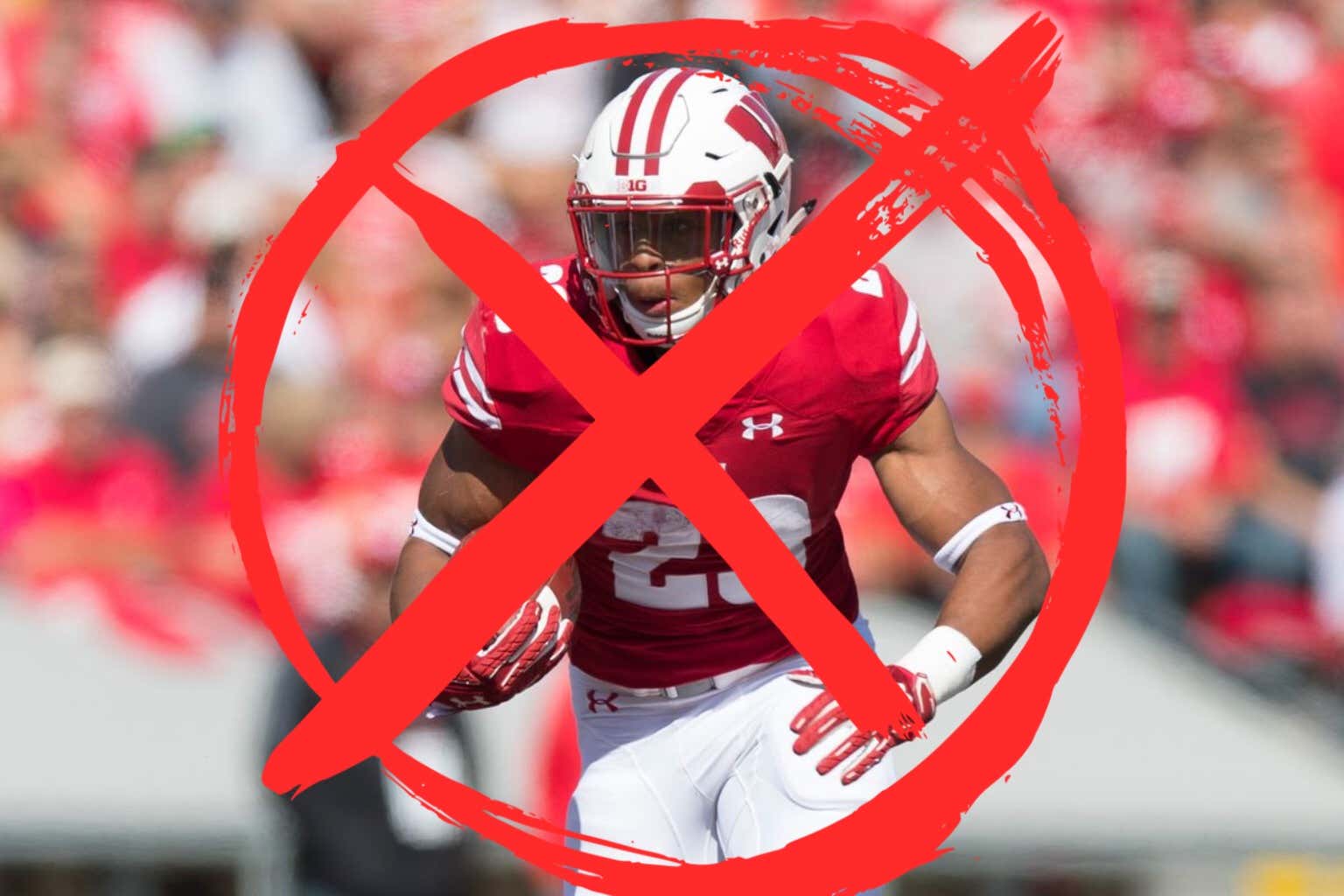 Taylor came into the year as a top three favorite according to the odds in Las Vegas, but he is no longer in contention, partially credited to his team and partially credited to the eye-popping quarterbacks elsewhere in the country. Notice that his statistics aren’t the cause of his elimination. Taylor has quietly been business as usual up in Madison, rushing for over 100 yards in each of his first six games, including 221 vs. Nebraska and 253 vs. New Mexico. His 8 touchdowns could certainly be improved though, as they all come from just three games. Taylor has been held scoreless in 3 of his last 4 games, despite rushing for 331 yards in those games without touchdowns. Regardless, the fact that Wisconsin has not emerged as a contender, and the Badgers may not even win the Big Ten West anymore, have really dampened Taylor’s chances. The other three favorites are all playing huge games week in and week out. 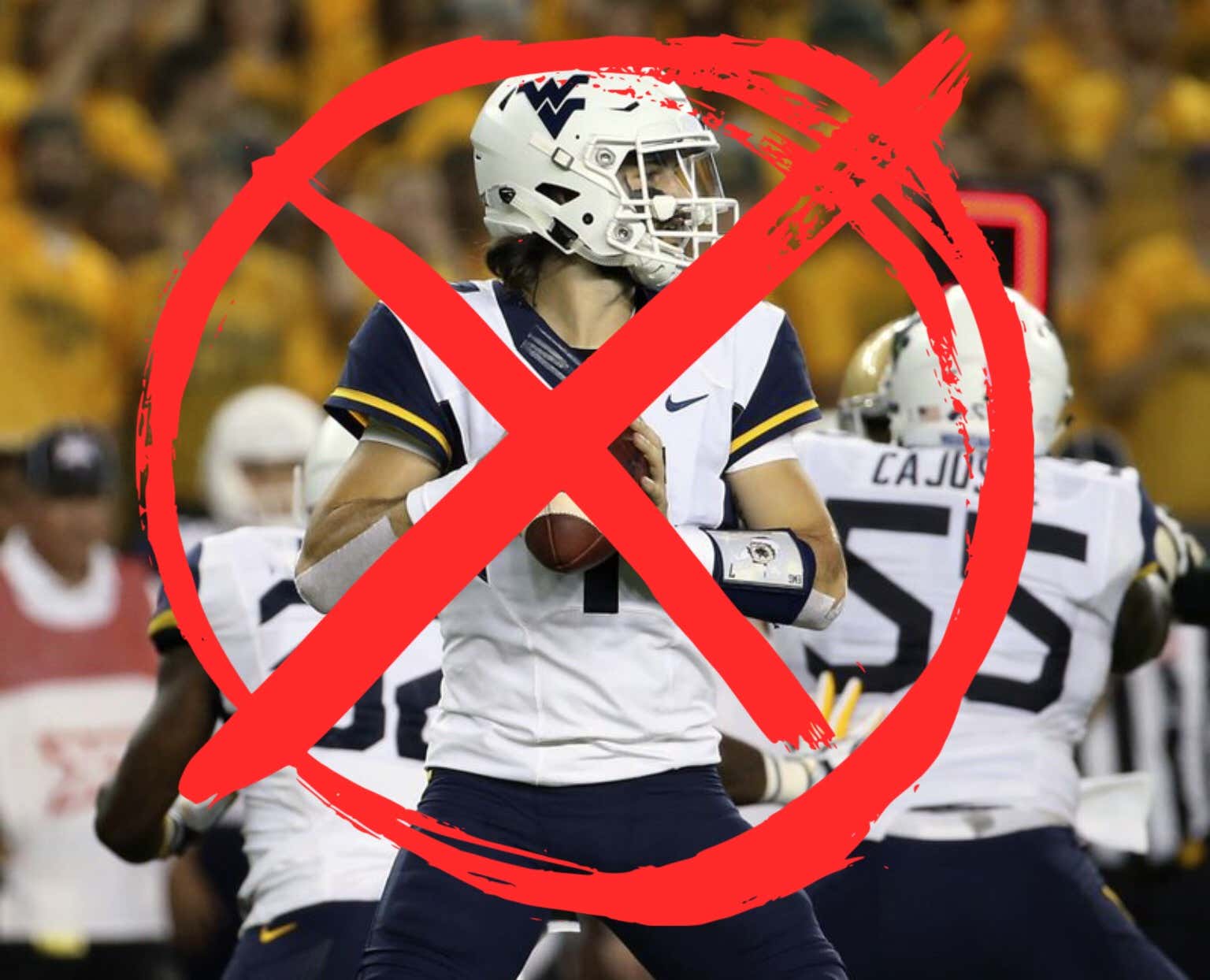 I’m not mad at Will, but I am disappointed. I thought he had a really good chance! Through 5 games of the season, Grier had 1800 yards and 21 touchdowns. The Mountaineers were 5-0, and they were creeping up the rankings. The stock in Grier and West Virginia were rising quickly. Then, last week at Iowa State, both laid a huge egg. The Cyclones beat the Mountaineers 30-14, and Grier threw for a measly 100 yards and 1 touchdown. West Virginia’s chances of making the College Football Playoff now sit at 1%, and Grier’s chances of winning the Heisman can’t be much higher. 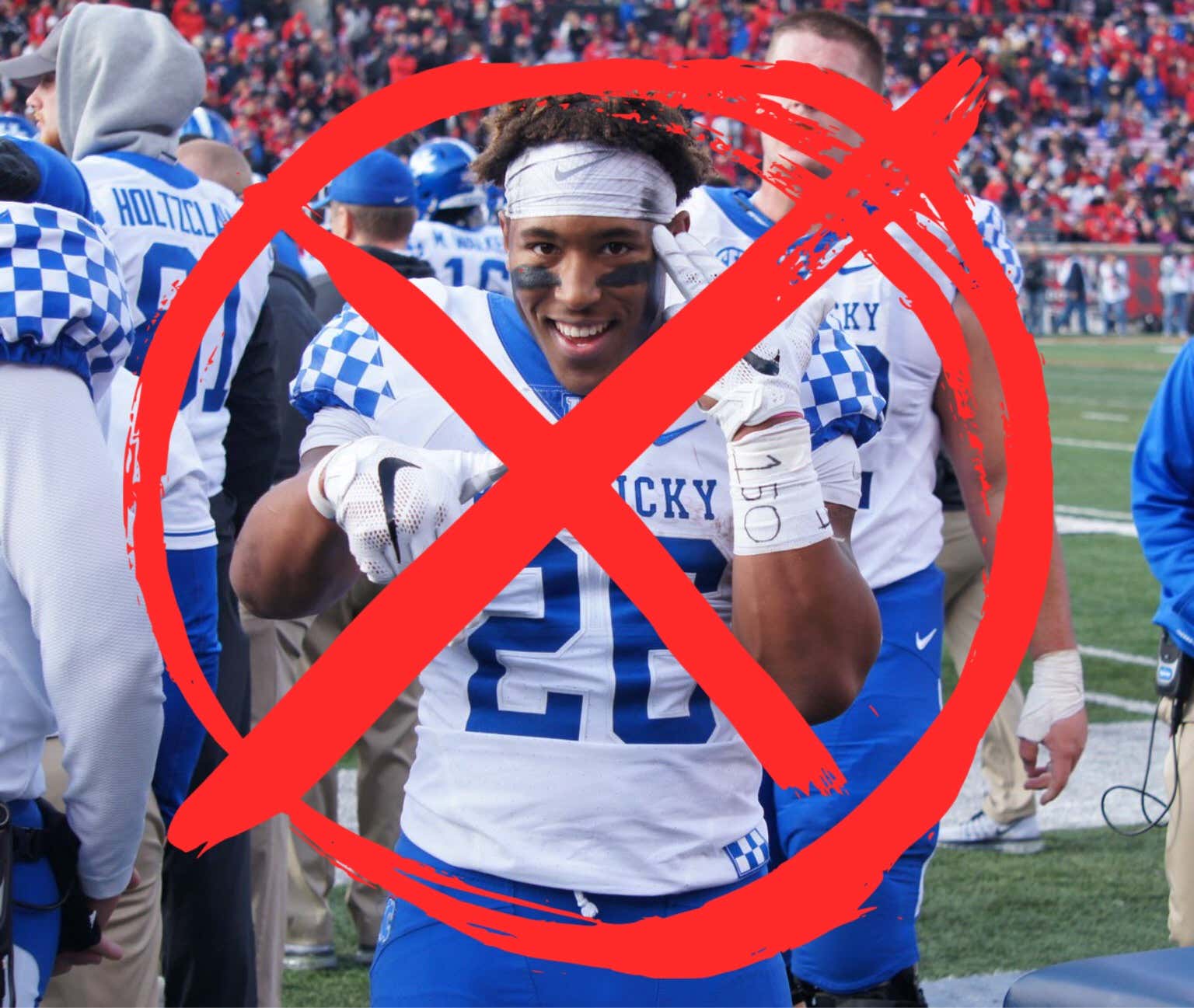 Kentucky Football took the world by storm to start the year with their 5-0 start, and those on campus and surrounding Lexington decided that their electrifying junior running back was a Heisman contender. To be honest, as fun as Kentucky’s run of beating a ranked Florida team and demolishing a ranked Mississippi State team was, Snell never sniffed the Heisman race. As good as he was, and he was good, his stats weren’t eye popping enough and the fact that he plays on Kentucky meant he would never beat out an Alabama or Ohio State quarterback. After a Week 6 loss at Texas A&M in overtime, in which Snell rushed for 60 yards and 0 touchdowns, he now sits at 699 yards and 8 touchdowns on the year. The Wildcats still control their own destiny in the SEC East and they get Georgia at home, but Snell is done in the Heisman race. Again, Bryce Love rushed for 2100 yards and 19 touchdowns last year, and he didn’t win the award. 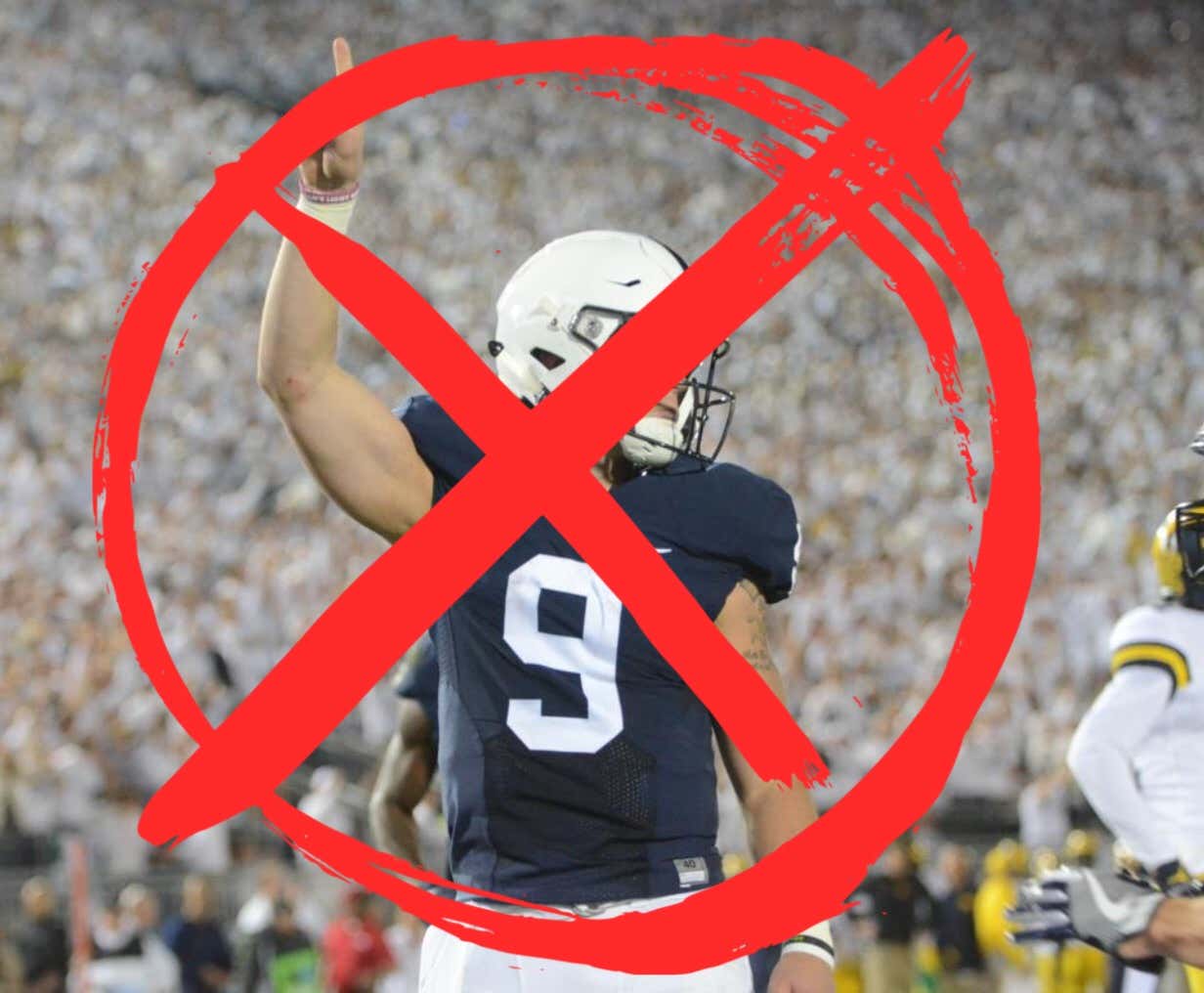 When opportunity knocks, you need to answer the door. McSorley had every chance to announce himself with authority onto the Heisman scene in Week 5 against Ohio State on primetime television, and well, I guess he personally didn’t disappoint. He actually played an incredible game, throwing for a season-high 286 yards and 2 touchdowns, as well as rushing for a career-high 185 yards. The Nittany Lions were up 26-14 with a 2-pt conversion attempt to go on the Buckeyes with 8 minutes left in the game, and McSorley was on the verge of jumping Dwayne Haskins and being the premier Heisman candidate in the Big Ten. Unfortunately for some, Haskins threw two touchdowns in the closing minutes, leading the Buckeyes to a 27-26 victory and knocking McSorley even further down the totem pole. A 21-17 loss the following week to Michigan State all but ended both his and Penn State’s chances. 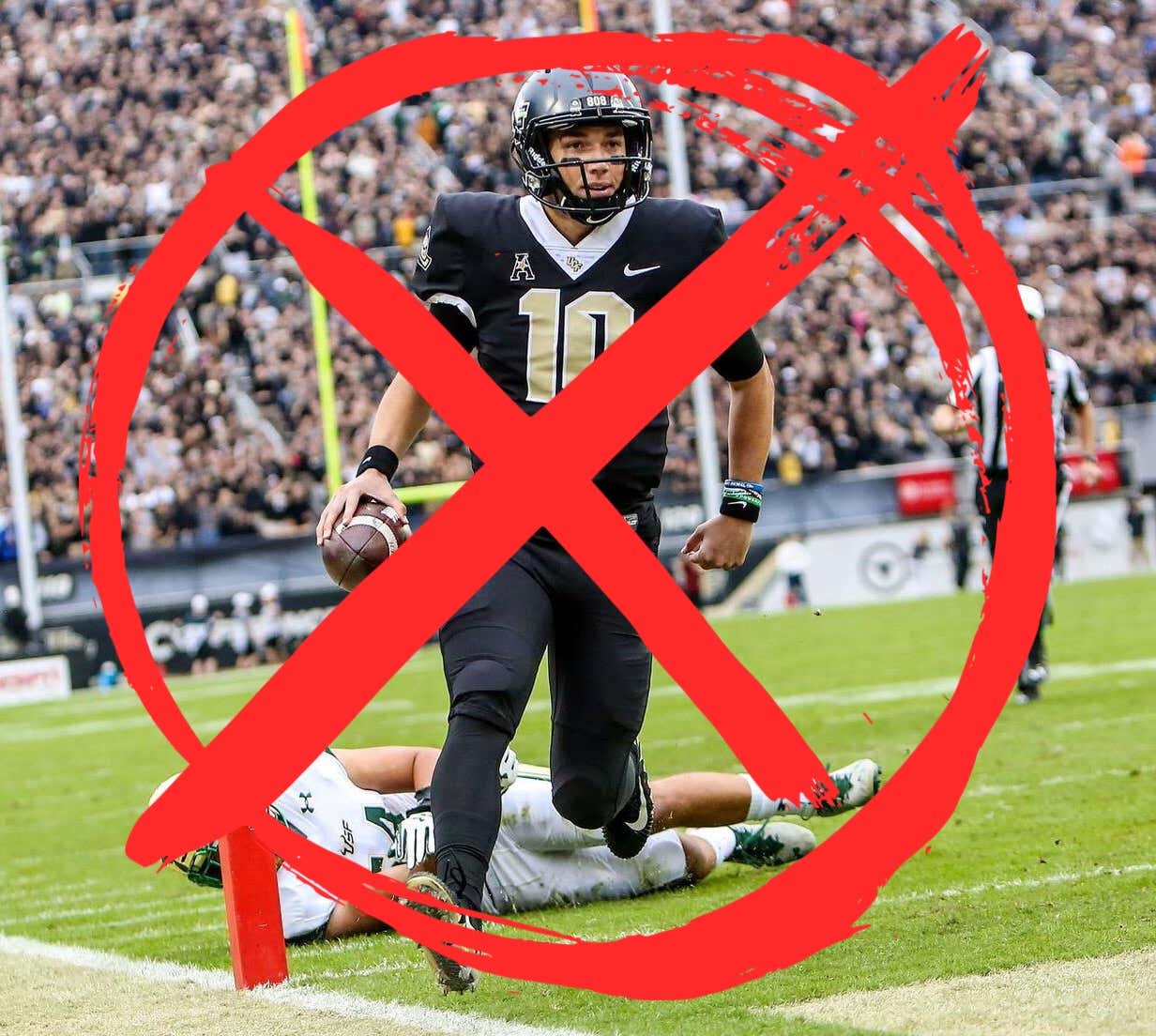 What do you want me to say here? It’s the same thing with UCF’s College Football Playoff chances. You have a good argument, but that’s all you’ll ever have. UCF can run off back to back to back to back undefeated seasons, and their QB will not win a Hesiman trophy. They just don’t play in any big games, don’t have a strong enough schedule, and don’t have the rich tradition of other schools. Plus, in this case, Milton doesn’t even have the stats of the other quarterbacks.

Time of Elimination: When he committed to UCF. 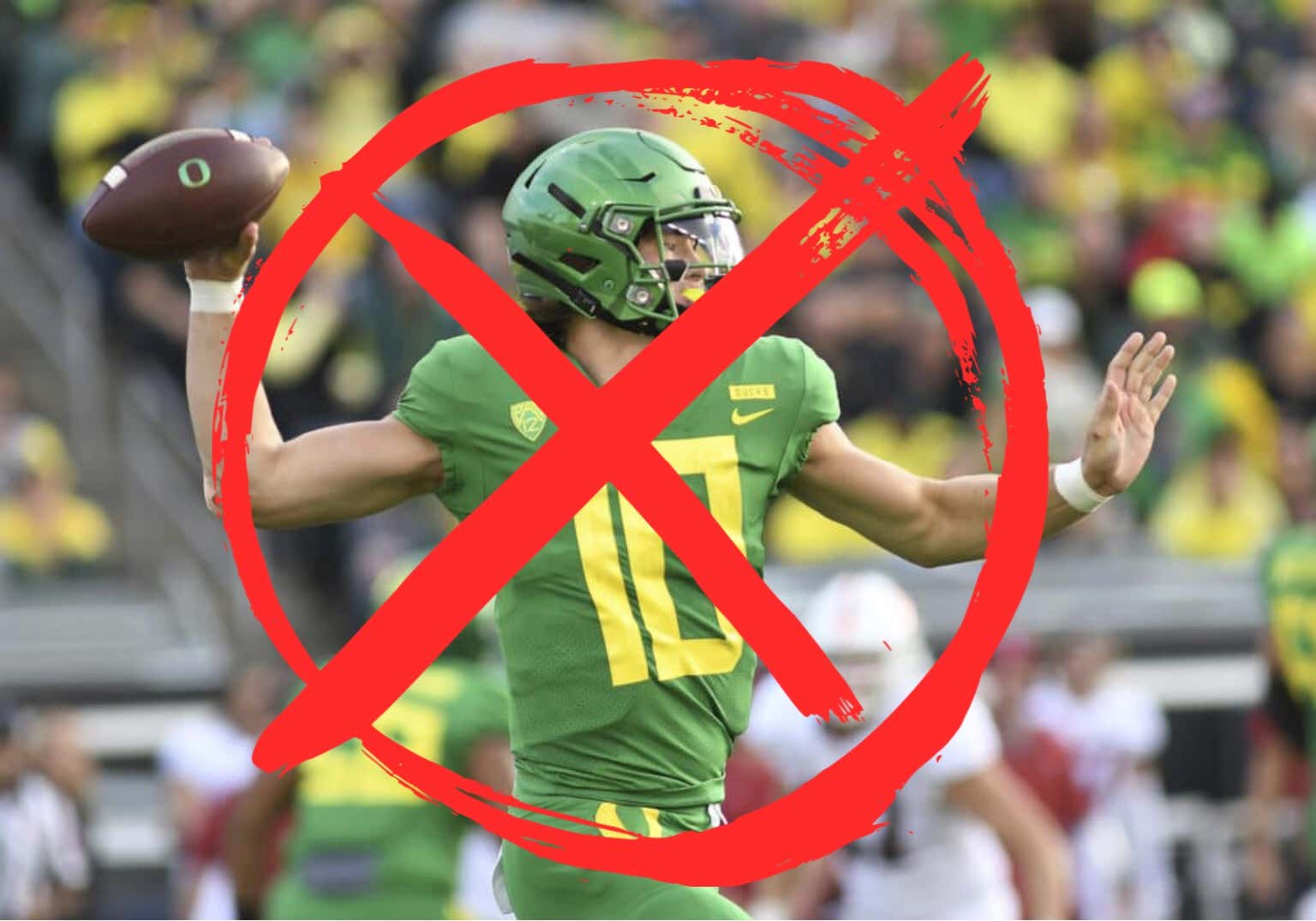 The Ducks started off 3-0 and Herbert had 13 touchdowns in those three games. In fact, at halftime of their 4th game, they were up 24-7 on Stanford and anything from a Heisman Trophy to a College Football Playoff berth looked realistically within reach. From there, everything stopped as the Cardinal came back to win 38-31, and Herbert finished the game with the same one touchdown he had at the half. His numbers have subsided since then too, as he threw for only 225 and 202 yards in the next two games, with 2 passing touchdowns each game and 0 rushing TDs from the dual threat QB. Oregon still has an outsiders chance at the playoff, I guess, but Herbert’s chance at the award seems to have fallen by the wayside. 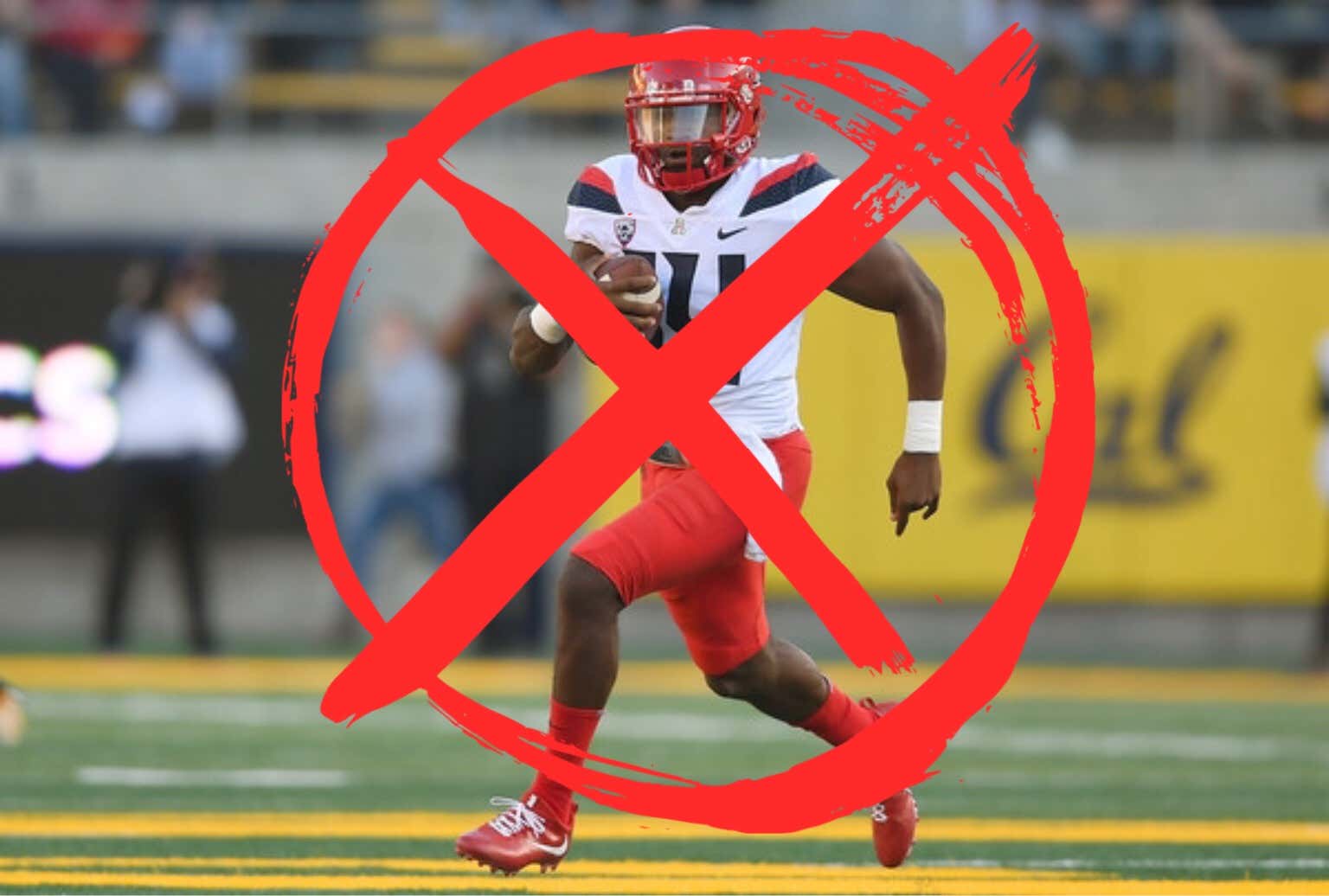 Tate came into the year with 12/1 odds at the SuperBook in Las Vegas, and he has more than disappointed. Arizona dropped their first two games of the year, losing to BYU and then getting absolutely obliterated at Houston. In that 45-18 loss at Houston, Tate threw for 0 touchdowns and 2 interceptions. Flash forward 6 more weeks and the Wildcats are now 3-3, and Tate has been ruled out against UCLA this week with an ankle injury.

Time of Elimination: Week 2 –  0 passing touchdowns and 2 interceptions in a 45-18 loss at Houston 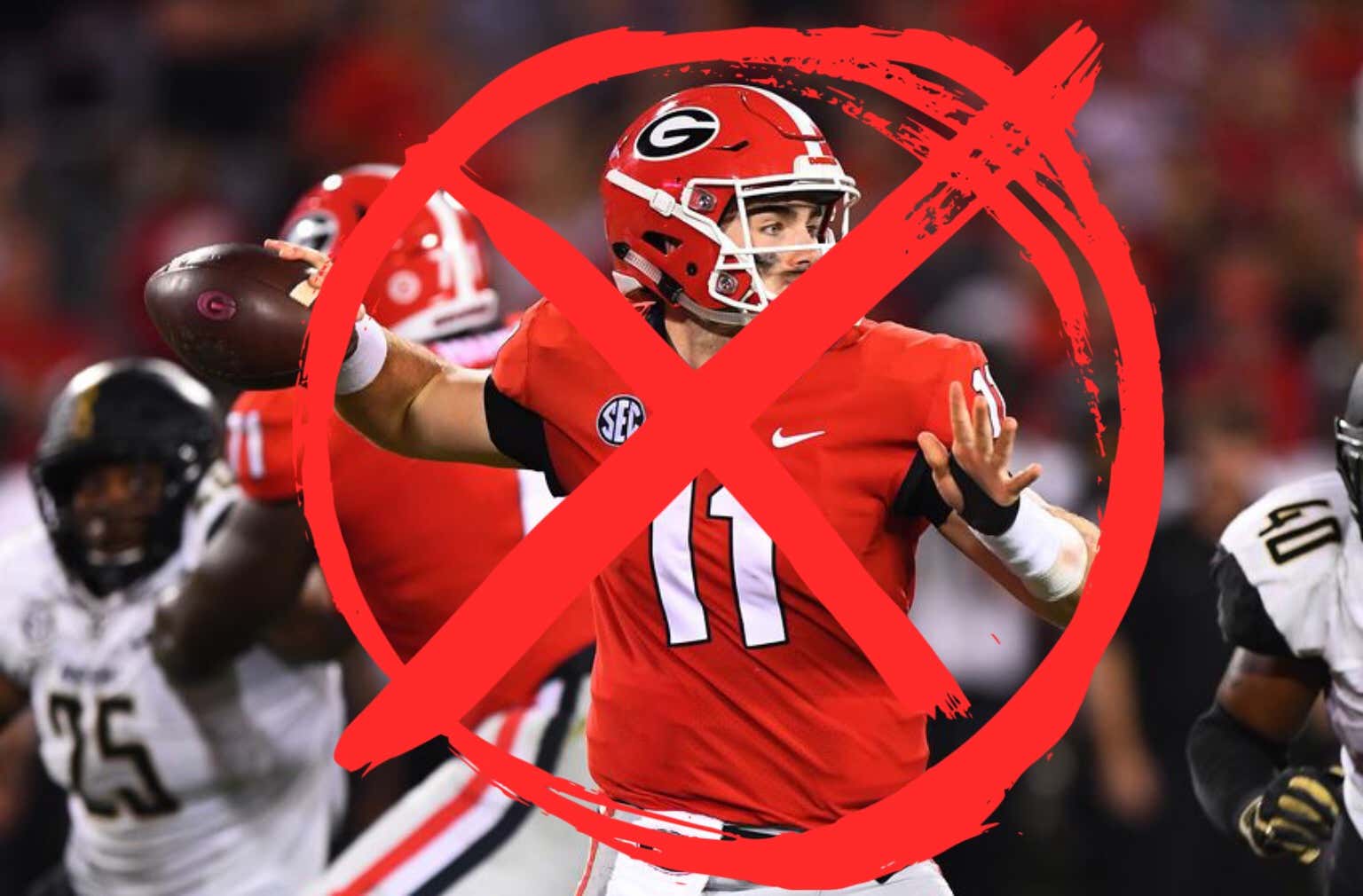 The way Georgia is utilizing their quarterback will always make it difficult for Fromm to win an individual award like the Heisman, especially with the way they run the ball. But if he led the Bulldogs to a 12-0 record like many in Athens had hoped he would, then it would be tough to keep their signal caller off the short list. The stats aren’t up there on the leaderboards (1400 yards and 13 TDs through 7 games), and LSU knocked Georgia from the list of unbeaten this past Saturday in their 36-16 rout of the Bulldogs. Georgia still has the opportunity to claw their way back to the playoff through the path of the SEC East and then beating Alabama in the SEC Championship, but it doesn’t look like there’s a path for Fromm to regain a spot in the Heisman race.

With those 9 former contenders now out of the picture, as well as the 10,000 other Divison 1 college football players, that leaves us with exactly 3 players left in contention. 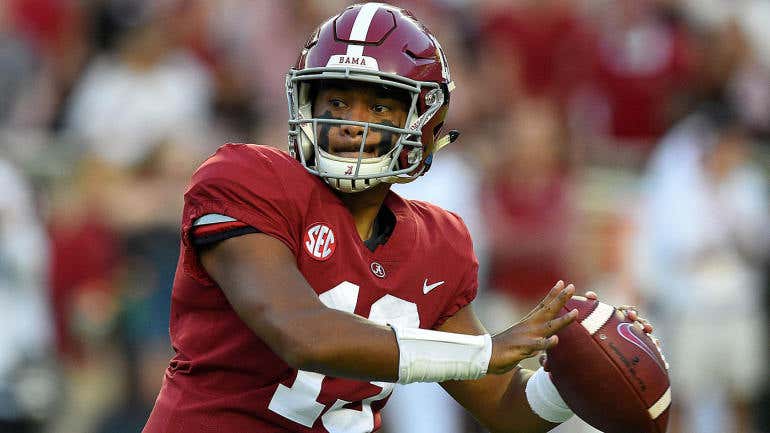 Entering last week, Tua was the heavy favorite to take home the award, without too much clutter in his rear-view mirror. The sophomore is completing 72% of his passes, has thrown for 21 touchdowns, has no interceptions, and still has yet to see playing time in the 4th quarter. Alabama has scored on every single opening drive they’ve had this season. The Tua train was in full motion, and there didn’t seem to be any defense that could stop it. Unfortunately, it wasn’t a defense that did stop it. It was an injury. In the 3rd quarter of last weeks game against Missouri, Tua aggravated his right knee on a slide, and he did not return. Nick Saban has since clarified that Tua could have returned if necessary, and he has not missed any practice since. Regardless, the sudden scare has seemed to create a glimpse of hope for the other candidates. Tua is still the leader in the clubhouse though, and he will have more chances to show why on the national stage. Alabama still goes to LSU in early November, and they will host Auburn in the Iron Bowl at the end of the month. 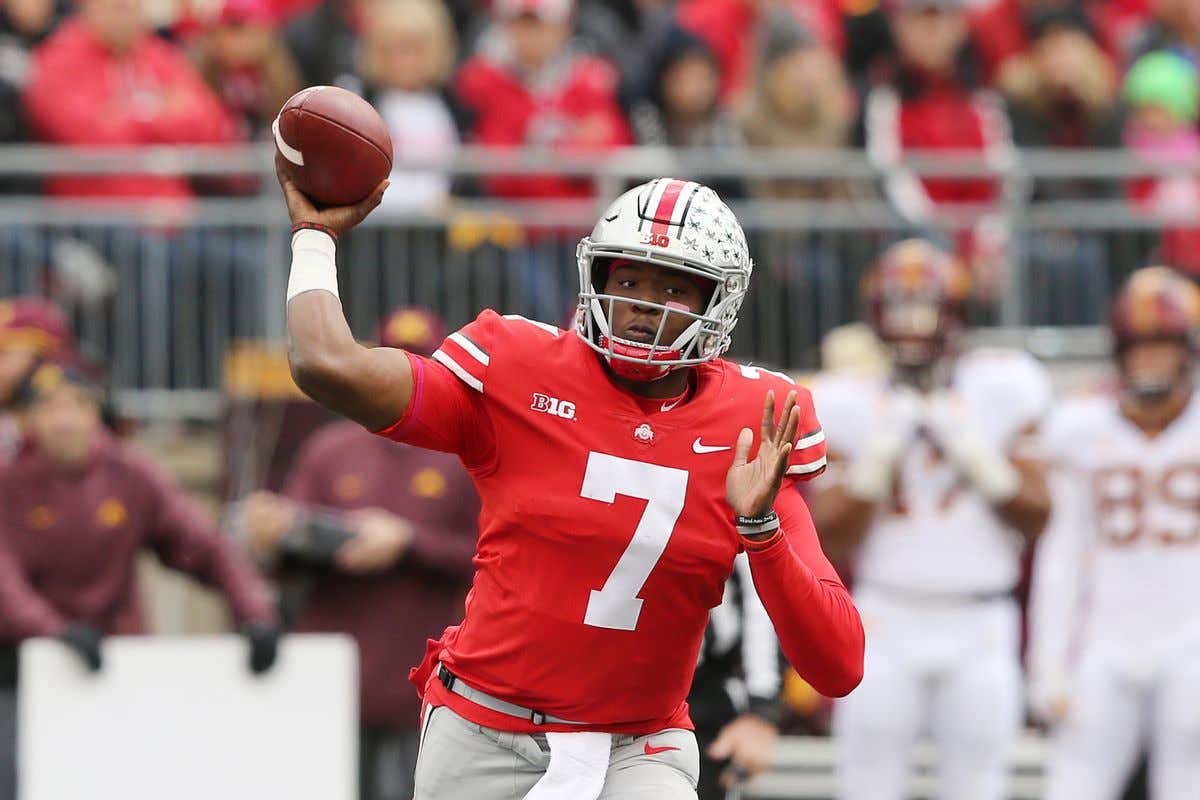 Through 7 games, the first-year starter for the Buckeyes has thrown for 2331 yards and 28 touchdowns. He is on pace to comfortably break the Ohio State records for passer rating, completion percentage, touchdown passes, and passing yards.  He leads the nation in passing touchdowns and is 3rd in yards behind the unknown quarterbacks from Washington State and Hawaii, so I’m honestly not too sure why the media has decided that Tua is the clear favorite. While Tua not playing in the 4th quarter does mean that his stats are deflated, it also means he hasn’t had any clutch end of game moments. Haskins is no stranger to those, as he has engineered comeback victories over TCU in Texas and Penn State in Happy Valley. Haskins will play on ABC this Saturday night against Purdue, will travel to #24 Michigan State in a couple of weeks, and will host Michigan at the end of the season. The opportunities to jump Tua are there, but it may take an Alabama loss to really help him get over the hump. 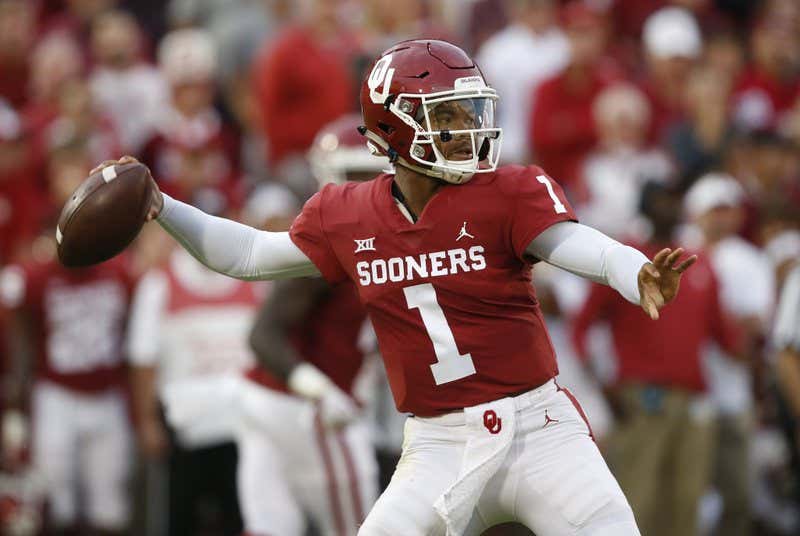 I personally believe that while Murray is a clear Top 3 vote getter right now, he actually has no chance of winning at all. Bovada has him trailing Tua (-150) and tied with Haskins (+300), but what is going to separate him from those two? Haskins is going to have better numbers than him, and Tua would too if Alabama ever needed to play him in the 4th quarter. Without the numbers, a Heisman winner would likely need to come from a really good team. Oklahoma is pretty good, but unless we see a major shakeup amongst the ranks, Alabama and Ohio State are both going to finish higher and play in bigger games than the Sooners. I just don’t see a way that Murray can surpass either quarterback, seeing as he is already trailing Haskins by 700 yards and 7 passing touchdowns. I guess he would need Ohio State to slip up (very possible), Tua’s injury to linger (possible), and his rushing statistics to make up for the gap in passing that will be evident at the end of the year.