Awesome stuff from a Vezina nominated goalie about how impossible it is to stop Ovi’s shot unless you’re an octopus. It’s sick that goalies know exactly where he will be shooting from, they gameplan and practice for that exact shot, and then in-game there’s absolutely nothing they can do about it. The patented Ovi Shot from the Ovi Spot is confirmed unstoppable. And Vasilevskiy cannot fully comprehend it. He just says “I don’t know where he learned it”..,twice and wishes he had 8 arms. Sure there are players in the league with better hands or a quicker release, but Vasilevskiy is just completely baffled by the trajectory of Ovi’s shot because nobody else has it. It’d be like a cornerback in football just tipping his cap to a WR saying that he’s uncoverable, you’d never hear it.

This just adds to the legend that is Ovechkin. I think people sometimes forget how insane his first 5 seasons in the league were: 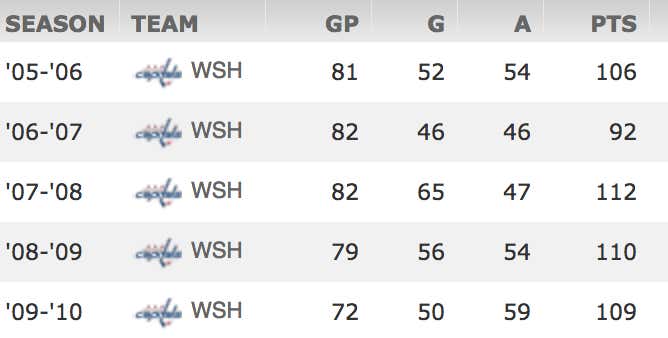