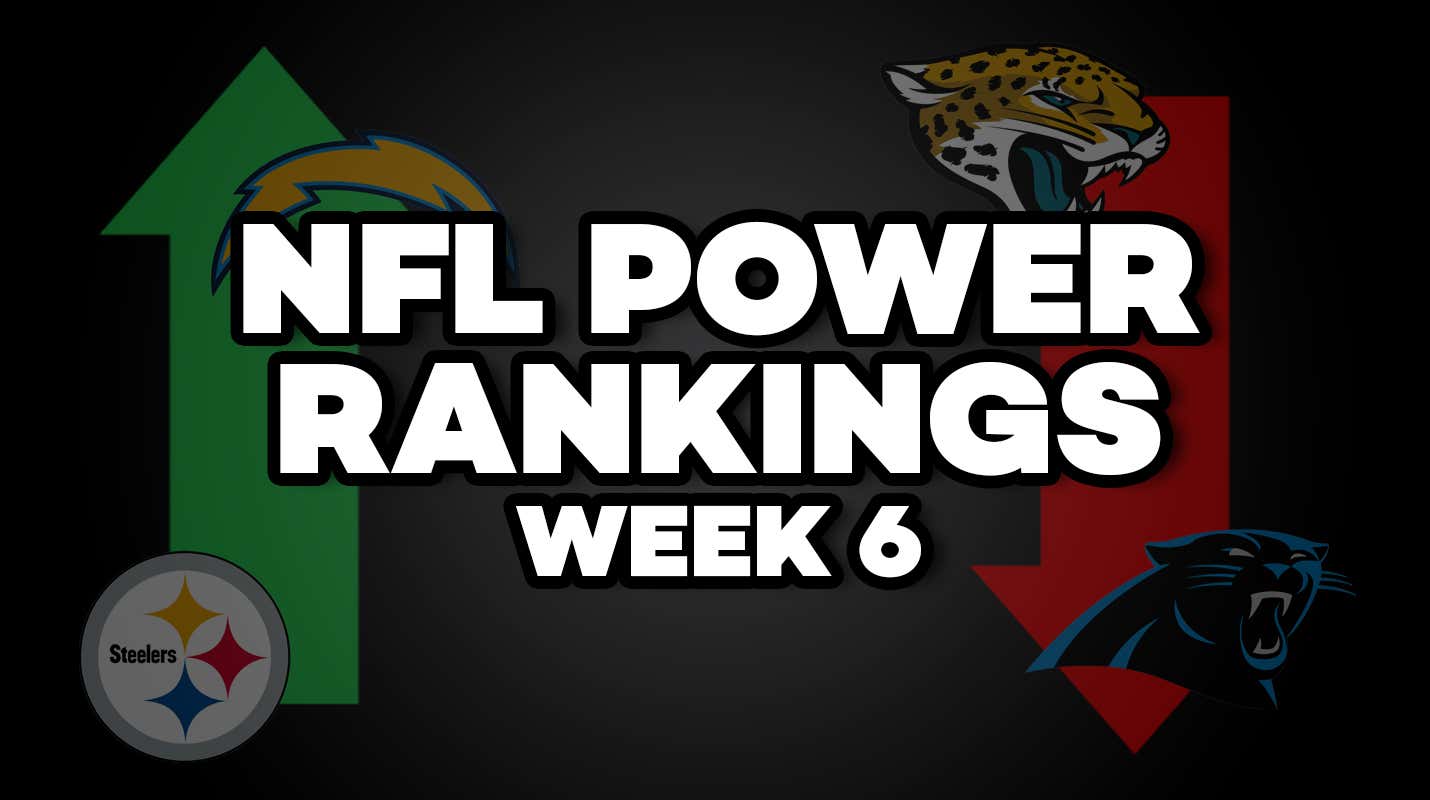 These Power Rankings become harder and harder every week. One week a chunk of teams looks terrible and the next week the same chunk looks good. Parity is alive and well in the NFL and I taking these Power Rankings very seriously.

Here’s to triggering everyone over their favorite team on this fine Tuesday morning.

The worst team in football, the Raiders are led by a head coach in Jon Gruden who might have no idea what he is doing at this point. Fans in Oakland deserve better.

Things are getting uglier and uglier for the Giants. They need to keep tanking, think about trading Odell Beckham Jr. and find a quarterback to pair with Saquon Barkley.

It was a tough loss for a resilient, injured San Francisco team in Green Bay. C.J. Bethard was throwing a nice game up until his late interception that led to the Packers’ victory.

They fought hard against the Vikings, but they won’t do much this season with that abysmal offensive line.

After starting the season with some close, tough losses, the Colts got their teeth kicked in for the second straight week. Andrew Luck just still doesn’t look totally right on the field, despite his four touchdown passes.

Nathan Peterman is my favorite player in NFL history.

They battled hard, but the Broncos just didn’t have enough in the tank to beat the Rams. Case Keenum looked okay in the comeback, but you have to wonder if they take a quarterback in April’s NFL Draft.

The great start to the season seems like ages ago, as Tampa Bay drops their third straight game and fired their defensive coordinator Mike Smith on Monday.

There is still time for the Falcons to turn it around this season, and a win over the Buccaneers is a big help heading into what should be an easy victory over the Giants. I would consider it an early must-win for Atlanta.

Yikes! The Browns take a big fall in the rankings after they got dominated by the Chargers. Baker Mayfield had a tough game, but the coaching staff had a worse afternoon with a clear lack of preparation and no mid-game adjustments. GUARANTEE: Baker will have a huge bounce-back game against the Buccaneers.

It was a nice win for the Seahawks to stay alive in the NFC, but it was against the Raiders so… whatever, I guess.

While the wins have come against the Broncos and Colts, the Jets took care of business again this weekend for their second straight win. Sam Darnold had his best game so far in his young career.

It took a Nathan Peterman appearance to overcome the Bills, but the Texans find themselves tied for the AFC South lead after a rough 0-3 start to the season.

The bye week benefits teams sometimes. Detroit moves up by default. They might only be 2-3, but their two wins have come against the Patriots and Packers.

How ‘bout them Cowboys! Don’t look now, but Dallas, despite all of their issues, is 3-3 after dismantling a great Jaguars defense.

Things have not been good for Tennessee after their win over the Super Bowl Champions, with back-to-back losses to the Bills and Ravens. Getting shut out in the NFL this season is a wild feat.

It might have been against the lowly Giants, but the Eagles have shown signs of life. Making a big trade to bolster their rushing attack might boost them back up in the upper echelon of the NFL.

The Panthers tumble in the Power Rankings, mostly because of good performances from the teams below them. After a near loss to the Giants, the Panthers did not look very good against Washington.

There is a clear constant with all of the Redskins’ games: when Adrian Peterson runs the ball well, they look good (3-0), when he doesn’t, they look awful (0-2).

Beating that stout Bears defense and scoring 31 points is a tall task, but the Dolphins were able to avoid a three-game skid and knock off one of the better teams in the NFL. Brock Osweiller magic has swept South Beach (until Tannenhill inevitably returns).

What is going on with the Jaguars? They have gotten their teeth kicked in in back-to-back weeks, the offense is a mess and their strength, the defense, got worked by the Cowboys this past Sunday.

It was a nice bounce-back win for the Ravens following their loss in Cleveland. Pitching a shutout in the NFL, especially in this offense-heavy season, is worthy of a nice hat tip.

Good for Mason Crosby, man, bouncing back after a terrible Week 5 kicking the football. It’s hard to bet against Aaron Rodgers, who might have his team clicking after a come from behind win at home on Monday Night Football.

That was a devastating loss for a Bengals team that has looked good all season. The Steelers continue to rip the hearts out of Cincinnati every time they meet up on the field.

I still like this team a lot, but their loss in Miami was brutal. Brock Osweiller has beaten the Bears now three times in three separate debut starts for teams (Broncos, Texans and Dolphins). What a fucking wild stat.

It was only a matter of time before Big Ben and the Steelers came into form as Super Bowl contenders. Their win in Cincinnati was a classic Big Ben comeback and this team will only get better if Le’Veon Bell returns.

They struggled a bit against the Cardinals, but it seems as though they are starting to put the pieces together and look like the team we expected to see in the preseason.

This might come with a little bias because they beat the shit out of my Browns, but I truly think their offense is dynamic. They don’t have any real great wins, but their two losses came against the Chiefs and Rams.

Dropping a team on their bye week is always hard, but the Saints are still an obvious choice to sit inside the Top 5 of these Power Rankings.

No team that loses a game that close in Foxboro should drop that far down the rankings. I can’t wait for their matchup against the Rams in a few weeks.

I mean, no shit, right? It was obvious that this team would figure it out and their win over the Chiefs is more proof that they are still the class of the AFC.

A Los Angeles team going into cold weather this early in the season and winning? More proof the Rams are the best team in the NFL.

—
Okay, talk to you next week.