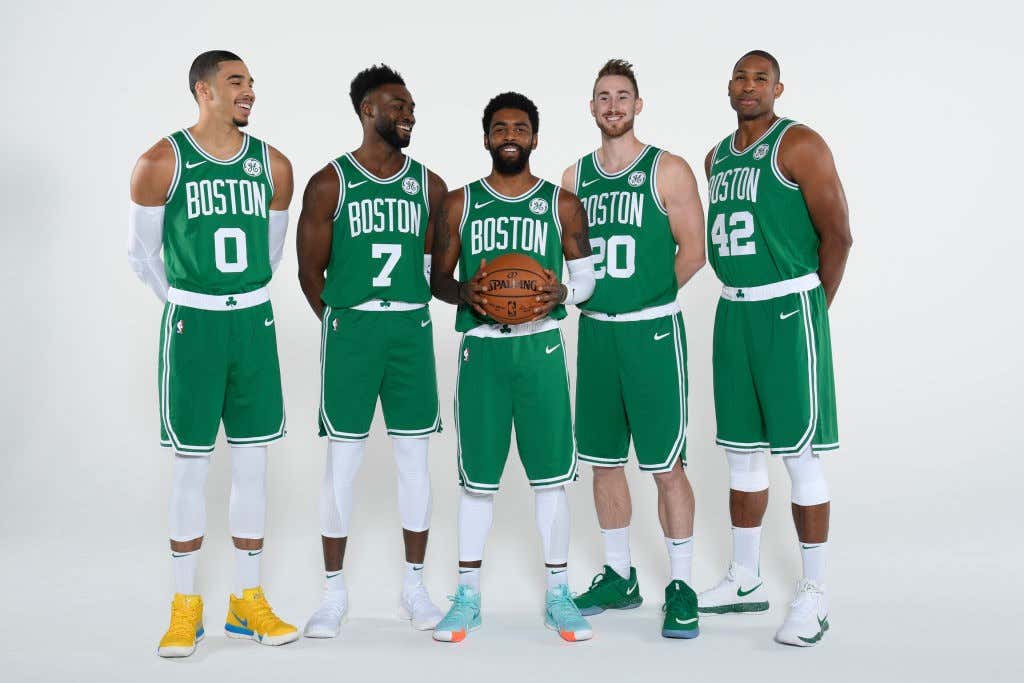 In case you’ve been living under a rock, you know the Celtics start tomorrow. You could say a certain blogger is fairly excited. I don’t think I’ve slept ever since our countdown got to KG’s number. This is like the night before Hanukkah times 1 billion. So much hype, so much excitement for what should be an incredible season as the Celts have officially transitioned from the hunter to the hunted. There are so many reasons to be excited for the upcoming season I decided to list 18 things I’m looking forward to most. Why 18? Well take one step in the practice facility and you’ll see this number is all that matters to this franchise. Our quest for a NBA leading 18th banner. Before you go ahead and yell at me online, these are in no particular order, I just listed them as they popped into my head. Let’s get started because I’ve been waiting to write this blog for months.

1. A healthy Kyrie and his first Fuck You Three

We got our look at what a healthy Kyrie looked like in his brief preseason appearance, and now that we know he’s 100% healthy and ready to roll, I cannot wait for his first Fuck You Three. You know what these are, when Kyrie sizes up his defender and takes a three right in his eyeball. Sometimes it’s deep, sometimes it comes off some fancy handles, sometimes they are momentum threes, you just know it when you see it. Basically, it sort of looks like this

I’ll remind you that Kyrie is coming off a season in which he had the 2nd best 3P% of his career and a career high with 2.8 3PM a night. We’re going to get so many of these bad boys this year it’s going to fucking rule.

I’m really hoping the Celts open tomorrow night with an offensive set that gets Gordon a good/easy look so we can finally see him make a regular season basket at the Garden. It’s going to be so awesome when that finally happens and I hope the rest of the Garden joins me in a standing ovation. I don’t care if it’s a wide open layup, we’ve waited A LONG time to finally see it and lord knows it’s been brutal for him to work his way back. Even though we’ve seen him play in two preseasons, for me at least it’s still not going to feel truly real until we see him score a basket at home in a game that counts

Try and tell me something on this roster that brings more universal joy than a Yabu dab? Impossible. Granted who knows when this is going to come but when it does it will be glorious. I am so ready for Yabu’s Year 2 jump it’ll make your head spin. Maybe he’ll even play 15 minutes! I’m getting dizzy just thinking about it.

There are like 10,000 reasons to be in love with Brad Stevens, but his ATO wizardry is extremely high on the list for me. You know the confidence we all felt when Brady got the ball last night with an opportunity to win the game? That’s the confidence I feel whenever the Celtics have possession coming out of a timeout. Nobody, and I mean nobody Xs and Os like our fearless leader, and I am ready to see what he cooks up this year. Probably some shit the league has never even seen before.

The most beautiful screens that nearly $30M a year can buy folks. Everything about this offense is possible because of a solid Horford screen, and frankly you won’t find a better one in the league. I don’t know if people get distracted by his beautiful eyes or what, but give me all the Horford pick and pops, give me all the variations of high screen combinations with Hayward/Kyrie/Tatum. Get that position baby and let’s cook.

Give me the chaos. I need the drama surrounding a Marcus Smart flop that decides a game more than I need air to breathe. I love it and have absolutely no problem with it whatsoever. Whatever you can do to get an advantage is good with me, and I just love how it makes people so mad. I love how anti basketball people (hockey guys) talk about what a bitch move it is and all that, to me all I see is a guy taking advantage of the rules in order to help his team win by putting his body on the line. I also can’t wait to see how much it gets under an opponent’s skin. I hope he flops 10 times tomorrow night and Markelle Fultz mentally shuts down because he doesn’t know what to do. Give it to me.

Look, this is still the Celtics we’re talking about here. Just because guys are healthy doesn’t mean we won’t see the same trends that we’ve basically seen for forever. By now, I welcome the 31% shooting in the first quarter because I know what that means for the third quarter. In year’s past this may have upset me, but now I accept that this is just what they are going to do. I already know they are probably going to start 3/14 tomorrow night in the first quarter to give the Sixers false hope, and honestly more than anything else it’s a comforting feeling to know that the roster can chance all it wants but some things will stay the same.

You know what rules? Jaylen Brown in the open court. If this defense shows up like we all know it can, we’re going to be getting our fair share of open court Jaylen transition plays and the thought of that alone should raise your blood pressure. I need him reading passing lanes, I need everyone to keep their head and eyes up on every turnover and look for the gazelle streaking up the floor so we can see Jaylen do some crazy shit at the rim. Doesn’t hurt that he’s increased his STL% each of the last two seasons either.

I’m not kidding, this is the most important item on this entire list. That intro from 2007-08 has hands down been the best thing the Celtics have ever done in the history of my life. I’m not even joking, I say that with brutal honesty. You are kidding yourself if you don’t think the intro video/introduction music matters. Remember during the dark ages of this rebuild when it was that horrible like techno robot fucking music? Disaster. Watch that video and try not to be pumped up, it’s impossible. I wouldn’t even hate if they brought this back. No coincidence that they had a fire intro and won the title. If the Celts are serious about winning the title this year, this is an important Step 1.

10. Small ball lineups with Marcus Morris at the 5

Find me a team with more versatility than the Boston Celtics. OK maybe GS but don’t ruin this for me. I need all the crazy concoctions that Brad’s beautiful mind can think of. Give me a lineup of Kyrie/Jaylen/Tatum/Hayward/Morris and see what the hell happens. I can’t wait to “go small” when “small” is really five dudes who are like 6’6 to 6’8. Have Hayward run the point if you want and blow your versatile load all over opponents faces. The lineup combinations this team is going to have depending on opponent is the stuff Brad and Danny dream about, so I can’t wait to see it in action.

I mean there are many reasons why we are blessed to be fans of this great franchise, but few are better than Mike & Tommy. Two absolute legends they are a big part of what make watching this team so awesome. You just never know what you’re going to get on a nightly basis. Sure Mike is a professional, but hell next thing you know Tommy is off talking about how huge Aron Baynes’ dick is. Where else can you get that entertainment? Nowhere that’s where.

Ever since he dunked on LeBron, I have been counting down the days until we got to see Tatum’s Year 2 leap. Year 1 was about a billion times better than any of us expected, and now he’s entering his second year with a whole lot more knowledge and even greater expectations. How will he react to teams that now know he’s for real? Will he have improved enough over the summer to keep his efficiency and be that top tier player this team needs him to be? Will he finally be able to make layups and finish at the rim through contact? Who knows, but boy am I excited to find out.

One of the things I’m looking forward to most with Hayward is how Brad chooses to use him in the P&R. For those who didn’t watch him much in UTA, I think you’re going to be pleasantly surprised when we see Brad give him the keys to run the offense. It’s one of the things that make him so valuable and perfect for this system. They are going to be able to run their offense through their 3/4 in certain lineups because Hayward is an awesome P&R player. I’m excited to see his playmaking ability and improvement as a passer with all this talent around him, and I also love how it’s going to take the pressure off guys like Kyrie and can move him off ball where he can just nail Fuck You Threes. You get it yet? This is going to be awesome.

There are going to be so many wins man. Maybe the most in the East. Maybe the most in the NBA since GS already knows they can coast to the Finals and homecourt doesn’t matter to them. You know who it does matter to? Boston. I don’t really want to have to go to TOR for a potential Game 7, that’s a tough place to play. In order to prevent that, you gotta win. How many do I think they’ll get? Well you’ll have to wait for tomorrow’s official season preview to find out #pageviews.

I LOVE Angry Brad. It’s just so hilarious because he’s maybe the nicest person on the planet, but when the Celtics keep a good kick in the ass, nothing makes me happier than when Brad calls a timeout like 10 seconds into the game. You think he’s going to put up with some bullshit? No chance. You think he cares that they just had halftime and it’s been 5 seconds into a possession? Nope. When Brad gets mad everyone gets better and it makes me smile each and every time. You don’t want to see Angry Brad because it may be the scariest thing in the entire league.

Who doesn’t love awesome handles? Who is an owner of one of the best handles in the entire NBA? Kyrie Irving. Who does he play for? The Boston Celtics. Enough said.

Because that’s why we’re all here. Banner fucking 18.

So that’s my list. Pretty sure I nailed it all, but I’m open to hearing what you may be excited for this upcoming season. The wait is almost over, just one more sleep until the Celtics are back in our lives for real. Let’s GO.