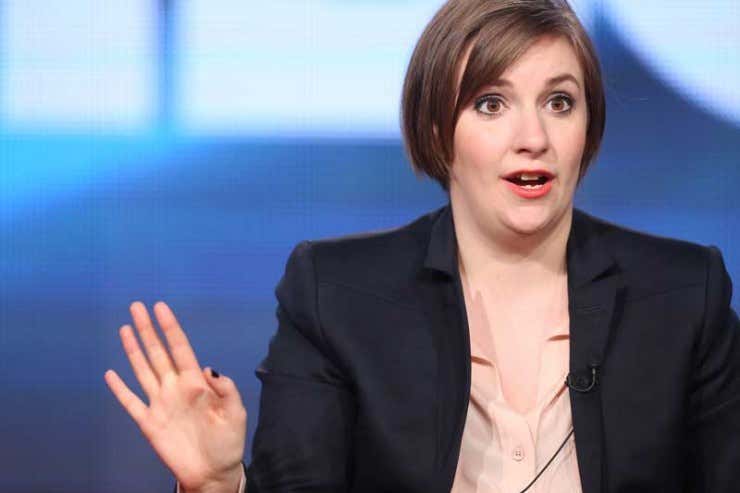 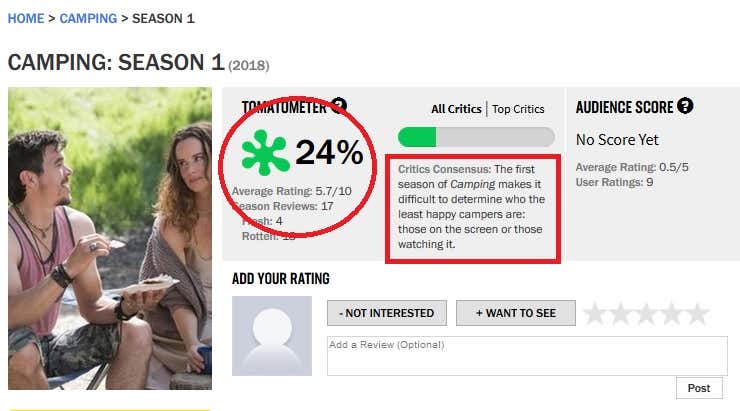 So I guess it’s safe to assume that Lena Dunham is no longer Lena Dunham proof? That’s she’s no longer the Golden Goddess, uncriticizable media darling she once was?

I mean, I have no quarrel with the 76 percent of critics who hate her new HBO show Camping. It looks like a raging tire fire. This is one of those trailers that does you a favor because it leaves no doubt how much the show will blow, thereby saving you from ever accidentally tuning in. Like she took a great cast including Jennifer Garner, David Tennant (my favorite Doctor Who and the best Marvel villain ever as Killgrave in Jessica Jones), Juliette Lewis and Ione Skye (Diane Court in Say Anything) and used her God-given lack of talent to make them completely unlikable and utterly unfunny.

Still, I’m stunned they would hate her new show this much because Girls was objectively terrible (that is, every moment where Brian Williams’s daughter wasn’t blatantly getting her salad tossed) and the literati still turned her into the Voice of a Generation. She used to be able to do no wrong.

But apparently the world has gotten worn out by all the effort it took to overlook Dunham’s general awfulness. Of her making up total bullshit like being at an event with Odell Beckham Jr. and projecting words into his head that he was asking himself, “Do I want to fuck it?” The “it” of course being her. When all OBJ was doing was politely minding his own goddamned business. Of her claiming to be a huge #MeToo supporter. That is, until one of her producers was accused. Then it became “sadly this accusation is one of the 3% of assault cases that are misreported every year.” In other words, Lena accused the 17-year-old victim of lying. Then there was the time she had American Airlines chasing ghosts because she claimed two of their workers were saying “they’d never accept a trans child and transness is gross.” When it turned out she was at a terminal American doesn’t use so none of their employees would have any reason to be there. And those examples are just the tip of the iceberg’s tippity-tip when it comes to Lena Dunham’s phony virtue signalling horribleness.

But enough of me. Let’s hear a sample of what the critics are saying about her new creative venture:

“The series is grating — the TV viewing equivalent of nails on a chalkboard.”
– Amy Amatangelo, Paste Magazine

“It just wants to make everybody as miserable as possible, while attempting to squeeze in a few laughs… Unfortunately for Dunham and Konner, their latest attempt to enter this dramedy pantheon falls flat.”
– Andrew Husband, Den of Geek

“Camping delivers an annoying character who is anything but amusing. She made me cringe, yes, but only because I couldn’t wait to get away from her to go do my laundry and wash the dishes.”
– Matthew Gilbert, Boston Globe

“Camping all in all is less fun than waves of dive-bombing mosquitoes. Hell, even a good ol’ baked bean-infused fart-fest around the campfire would be a welcome diversion.”
– Ed Bark, Uncle Barky

Tell us how you really feel, TV critics who used to love her. But thanks for saving us from this gawdawful, Category 5 disaster before it was too late. This failure couldn’t have happened to a more deserving producer.