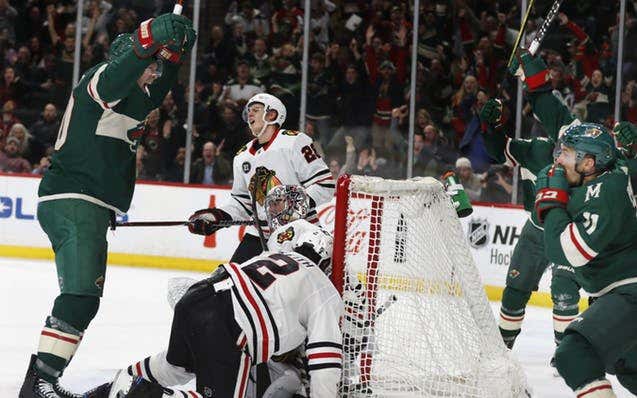 When you start the day off by trolling an entire fan base saying how the Hawks are their daddy, it doesn’t feel great to lose and especially not in that fashion. It’s always great to pick up a point when you’re on the road, but the Hawks lost a point more than they gained one against the Wild. The Blackhawks had numerous chances to put the game out of reach. Saad pushing a rebound chance a bit wide from about 3 feet away, then missing on a breakaway, then Kampf not shooting from over the redline on an empty net late in the game, and then a blown coverage in the final seconds allowing Minnesota to push it to overtime. Tough loss and a HORRENDOUS beat for anyone that had Hawks in regulation +200. That’ll leave a bad taste in your mouth, but it wasn’t all bad and I want to start this blog by focusing on the positives.

North-South, good speed, and so strong that he absolutely BULLDOZES Dumba on his way to the net before finding DeBrincat. When I close my eyes and think of Jonathan Toews I think of plays like that. The second assists was the new Toews. The sexy Toews. The Toews who is now looking like Adam Oates with eyes all around his head

Great awareness there to find Kahun. Toews has always been a great player, but I love the way he is finding new ways to score and make his teammates better. Credit to his linemates for finishing around the net too. Gotta love how excited Kahun gets about scoring goals. It’s a little intangible thing that I love. This type of enthusiasm is infectious.

Look at that face and tell me you don’t want to line up and go score again. Kahun makes it fun. When you traditionally talk about “energy guys” in hockey it’s usually Andrew Shaw type little trouble-maker guys, but you can be like Kahun and be an “energy guy” too. Love his attitude and how he competes. He will continue to get better this year as we go along.

Overall, even though that was a HARD point to give away, the Hawks are still meeting my threshold. I said before the year and over a million times on social media that I just want to have fun watching the Blackhawks and for them to work hard. For the most part that is what they’re doing.

The defense needs an upgrade. I don’t know where it comes from. I am not sure that Murphy and Forsling are the guys to fix this, but they’re probably better options than what the Blackhawks have available right now. This is Stan’s greatest failing. He doubled down on defensemen who were clearly overmatched last year and they don’t look much better today. I understand not wanting to commit long term to free agent dmen because Jokiharju was ready now, Mitchell will be in Chicago as soon as March, and the Boqvist and Beaudin are coming as well. BUT…the Blackhawks currently have $9.6M committed to Murphy, Manning, Rutta, and Gustafsson. Hjalmarsson re-signed in Arizona for 5. I’d MUCH rather have Hjalmarsson and $4.6M to spread around than having those 4 guys. This is what it is though. It will be very interesting to see what the Blackhawks do when Forsling and Murphy are healthy. I think they’re both better than Manning/Rutta/Gustafsson/Davidson. My D-pairs would be

The sky isn’t falling. There’s plenty to be excited about and plenty of fun to be had. This team is going to the playoffs by sheer force of will and that is a group that we can ALL get behind. We can talk about the fuck ups of Stan Bowman without shitting on the team, because this is an effort level we can be proud of in Chicago. We get championship level hustle out of average players…that will go a long way AND…Corey Crawford is back next week. It’s great to be us. Enjoy the climb and get on board. Join or Die.