Miami actually leads 8-4. I was a little shocked to see this because I assume we own every team in the NFL. I’m sure there are a lot of referee aided wins for the ‘phins. After the blood bath on Sunday the Dolphins record against the Bears will be 8-5.

This is a big time revenge game for the Bears. The ’85 Bears will be popping champagne bottles on Sunday.

Fortunately, Hurricane Michael (Ditka) didn’t come through the Miami area (T’s & P’s to all of those affected) so we have to play in regular Miami hot and humid weather. While this is not ideal this Bears team is special and can overcome any adversity.

The Bears should cover most of the points on their own. This week is an easy one. Take the Bears minus 3 and the over. I am going to be down there for the game so you know the crowd will sound like a Bears home game.

Jordan Howard is going to come out with a chip on his shoulder and silence all of these bullshit trade rumors. Start him if you get him and if you don’t do whatever it takes to acquire him. He will be the #1 overall RB this week.

If you are desperate or play in a 3 quarterback league you can start Brock Osweiler. He will play after we break Tannehill.

Bears: In week 4 we saw the Bears offense that we expected when the Bears took the field for the Hall of Fame game. This O is for real and should be one of the best in football the rest of the way. I’ve heard a few people talk about how this Miami D is actually pretty good and the Bears should be worried, but I’m not worried at all. I expect Mitch to pick up where he left off against the Bucs.

I’m sure they all know I will be there and won’t want to let me down. The Bears offense rolls again.

Miami: Look, there is not a single offense that worries me in the NFL. Our ridiculous defense gets to play a Dowell Loggains led offense? They will be lucky to gain more than 150 yards. Laremy Tunsil tried to get out of playing this week by getting a concussion, but to his dismay it looks like he is going to clear protocol and have to start this week. RIP.

Bears: The number 1 defense in the league gets to play against an offense that Vic Fangio saw on a regular basis when Gase and Loggains where in Chicago. The Dolphins O-line is in shambles. Mack is going to do his regular thing but this week the man that is going to feast is Akiem Hicks. Hicks will be named Defensive Player  of the Week whenever they usually make that announcement.

I also expect to see Roquan Smith play his best game of the season. Now that he has 4 games under his belt and the extra week to prepare the Rookie of the Year campaign begins now. It’s amazing that the D hasn’t even hit its stride yet. Please pray for the rest of the NFL they need all the help they can get.

Dolphins: They’re 22nd in the league in total yards per game. Don’t tell me this defense is good because they got a couple of lucky INT’s against a hurt Mariota, Andy Dalton, and a rookie in Sam Darnold. They’re facing a different animal this time around. Look what happened when they played against a decent QB like Tom Brady. I just don’t get what people see in this defense.

Bears: We’ve led this team to a 3-1 record and we are going to help carry them again. I’m sure I will only be one of 25-30 thousand that make the trip to Miami to get the team pumped up. We are the best fans in the world. The players love us and we are going to bring it on Sunday. 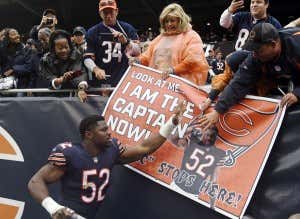 Dolphins: This is Florida we are talking about. The below picture was taken at a pregame tailgate/meth party. We are dealing with trash once again. 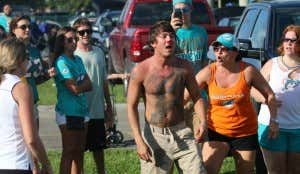 Fun Fact: Dan Marino’s nickname is, are you ready for it, #13. You don’t get much more creative than Miami Dolphins fans. Too much blow to the brain. 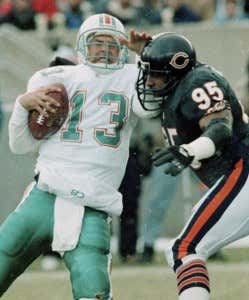 Up Next in Week 7: Patriots visit our Bears in a rematch of Super Bowl XX.