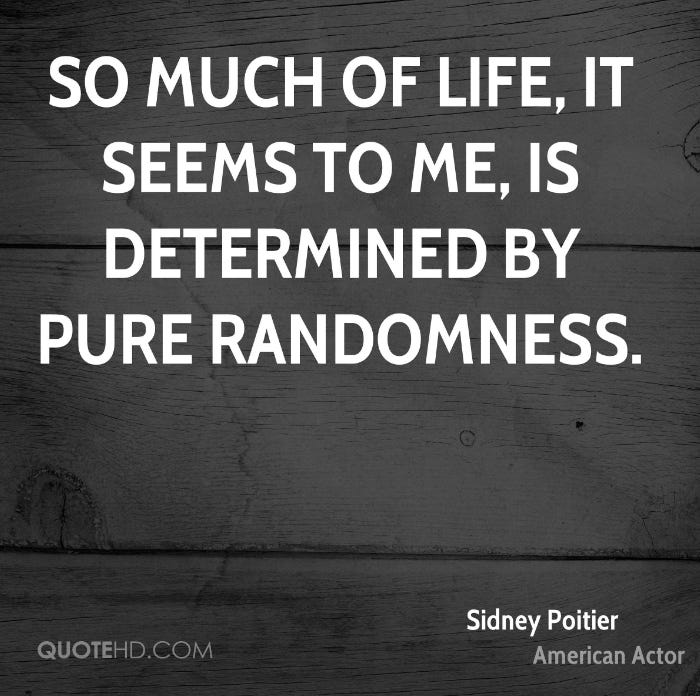 The Randomness Of Life

On October 20, 2011, I sat down at a New York City McDonalds. I was tired, frustrated, and very unemployed. I was living on a friend's couch on Hoboken, New Jersey, unsure what my future held. I'd been applying for jobs in New York for the better part of 3 months to no avail. I had been applying for dozens of jobs a day, maybe hundreds a week, and despite some sniffs, couldn't find a job. It sucked. I had done everything right- I got my college degree, I was contacting everyone I could on LinkedIn, cold emailing HR reps and recruiters and Maryland alumni. Nothing. And right before I was about to give up hope, return home to Maryland, and figure it out from there, sad and defeated, two ladies sat down next to me. And those two ladies changed my life forever.

You see, I was only in that McDonalds for one reason- to use their wi-fi to apply for jobs. I was tired of sitting in New York City coffee shops, so I decided to switch it up. I'd never been to a Mcdonald's to use wi-fi before, and they had a very nice dollar menu so I figured why not. While I was sitting there, the aforementioned two ladies, both maybe in their mid-50's, had a seat at a table right next to mine, and began talking while eating ice cream cones. And the more they were chatting about their days, the more it made me realize- these two ladies sitting a foot away from me work in HR, here in New York City.

I had to say something. So when the moment was right, I spoke up. I can't remember exactly what I said, but it was basically a general introduction of who I am and what I was doing in that McDonalds, and just like that the three of us began talking. They asked me about where I was from (Maryland), where I went to school (also Maryland), and what sort of jobs I was interested in (I wanted to shout "LITERALLY ANYTHING" but I settled on telling them I wanted to get into media). And wouldn't you know it, they worked in Human Resources at one of the biggest media agencies in the city. I couldn't believe it. They had me email them my resume right there at the McDonald's and said they'd be in touch.

And they weren't lying.

That day in the McDonald's was Thursday, October 20th and I went in for a job interview on Monday, October 24th. I couldn't believe it. It was finally happening. I was going to be an "assistant negotiator" and start my media career in New York City!

I didn't get the job.

It was devastating. They told me they'd "keep my resume on file in case something else came up". That classic line. Sure. Of course you will.

A little bit after, the friends I was staying with in Hoboken said I had to leave. I didn't blame them, I had definitely overstayed my welcome, and to be honest, we all thought I'd have a job by that point. I didn't know what to do. But thankfully, I had one more shot- a friend in NYC said I could stay with her for a little bit. One last push. I of course took her up on the offer, what was another month or two of being a bum at that point?

Time continued to roll on, and it was the same ol' same ol' for me. Somewhere in there I got a job at a coffee shop which I despised but I needed to work and it was better than nothing. I would work like 5:00am-1pm then afterwards would work til midnight trying to find a real job, interview for a job, meet with someone who might be able to help me get a job, or hopelessly stare at the Internet wondering what it was all about.

December came and it was time to go home for Christmas, and probably for good. I was ready to admit New York City had won, I couldn't make it there, I couldn't make it anywhere. Completely defeated, I booked my train ticket home. And then, as if by magic, on Monday December 19th, I got a call from a 202 area code. I picked up- it was one of the ice cream cone ladies. They wanted me to come in for another interview on that Wednesday. I of course said yes.

I interviewed with two new women- Gail and Susana. I didn't know how it went, I hadn't a clue how anything in media worked. I should have watched more Mad Men to prepare, that's my fault. They told me they had the next week off for Christmas, as all agencies in NYC do, and they'd make a decision about the job after New Years. I figured that was it. I don't remember much about that week, but I took all my stuff home to my old childhood bedroom, and I'm pretty sure it was one of the shittiest Christmas weeks of all time.

I sent another follow up email on Tuesday, January 3rd. I got a reply back a few hours later:

Happy New Year! Thanks for your message.

We are just settling back into the office this week and are aiming to make a decision on the position by the end of this week. You will hear from us soon.

I didn't hear back that week. The dream was over.

I was ready to move on with a new chapter of my life. It was too good to be true. Moving to New York without a job, a plan, or much money. Living on couches, working in coffee shops, meeting your future employer at a McDonald's. It was all too much like a movie to be real, and I was resigned to the fact that movies have happy endings because real life doesn't.

And then, wouldn't you know it, I got an email.

I got the fucking job.

It didn't pay well...at all. $35,000 a year to work in NYC is not a lot of money. I was very poor! And I hadn't a clue what the work would entail besides using a lot of Excel, and I lied on my resume about being proficient in Excel, because duh, that's what everyone does. I didn't care though, it happened. Someone was going to pay me to work at their company.

If I chose to go to a Starbucks instead of randomly deciding to go to a McDonald's that day, what would have happened? I can trace everything in my adult life to this exact moment from that random meeting in that McDonald's. It's absolutely insane that one tiny, supposedly meaningless decision changed my entire life. There are a billion different places with wi-fi in NYC, and I chose the right one, and sat at the right table, on the right day, at the right time.

And the irony of it all? My first day at that media agency was my first day that I ever read Barstool Sports. And that was the day, my first day on the job, that I decided I was going to get out of the cubes and work for Barstool. So I did the job for about a year, and then I was hired here in October of 2013, and though it has it's normal ups and downs, life couldn't be any better.

All because I sat down at that fucking McDonald's.

So why'd I tell this story? Because I think it's worth reminding people that life is just completely outrageous and often the most random of occurrences can have the largest impact. When will you get your dream job? When will you meet the love of your life? All you can do is put yourself in the best position to succeed and get what you want by working hard, and then life will figure itself out around you. There's no right time for anything to happen, there's no set clock for milestones, and there's no right or wrong way to get to where you want to be. When life is going great, enjoy it, and as the old saying goes, when you're going through hell, keep going. You never know when you're going to find yourself in the right McDonald's at the right time.