This is the year folks. Zion Williamson, Tre Jones, RJ Barrett are all best friends and they are going to ruin people on the court this year. We will always have people hating on Duke but this season will shut up the haters.

Reags knows his shit but this a slap in the face. Not having this team ranked #1 is a crime. This team will have a target on its back with this recruiting class and that also just comes with playing for Duke. This is the most excited I have been about a Duke team in a while. Once Zion committed and the fact that he respects the Coach K playing style and knows its not all about his flashy dunks is beautiful.

Losing Jeff Capel will be a little weird at first but in the long run it will help. He has been waiting for years to get out of the shadow of Coach K. John Scheyer and Nolan Smith relate to these player and players react to those things. Nolan Smith might be my favorite person on that coaching staff because he’s always jacked up and positive.

Last year we ran into trouble with fatigue and fouling out at the end of the game. The bench was awful and thats fixed this year. A complete 7-8 man rotation with key players returning. Alex O’Connell had some meaningful minutes last year to gain some experience and can carry it over. He also might be the new most hated Duke player since Greyson Allen is gone and I love every second of it. Marques Bolden is going to have to step up because he has the talent to be very good but he’s lazy. The player that is going to surprise you is Javin DeLaurier. He gained a ton of confidence in the tournament last year and is going to put in serious minutes.  This team is bonding at the Coach K residence, laughing and wait they have a legit point guard for the first time in 2 years. Tre Jones the brother of National champion Tyus Jones is legit. He has a mentor and knows everything Duke stands for. The weapons are so dynamic and once it clicks it will be unstoppable. Oh and we have the number one recruit who’s play will speak for itself. The Highlights of him is unbelievable.

Book this right now, Duke will win the Championship and I will stand by that statement. They have all the pieces, chemistry, the best coach in basketball and me. This picture gets me jacked up. I mean if this picture doesn’t show you that Zion is a freak of nature and is going to average 25 a game…you are a moron. 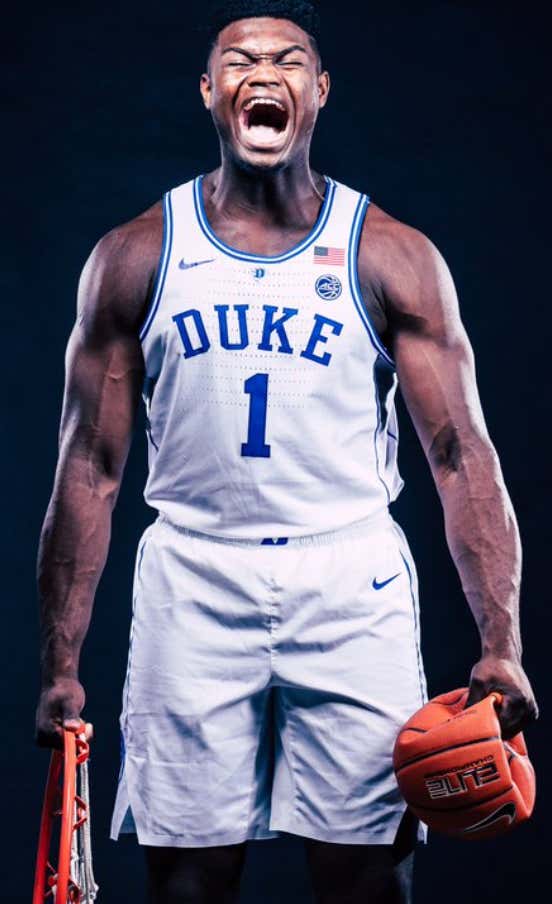 PS. Bet on Duke during the first week of the season, it has never failed me.