It’s been three games, the Hawks are back, I am back, and you should be too. It’s time for everyone to get back on board with this team, because this is the type of team we all fell in love with starting a decade ago. Watch those highlights and allow yourself to believe. Believe that this team is going to the playoffs because Jonathan Toews and Patrick Kane are going to drag them there by sheer force of will.

Before the season I wrote a blog saying that I was concerned about the culture of the team. Last year we saw a team that would pack it in as soon as trouble arose. That IS NOT the case this year. This team is relentless. Three games, points in all three, three comebacks, three reasons to believe. Everyone was saying what a wagon STL was going to be this year because they added Ryan O’Reilly. Vegas bookies have Toronto as one of the Cup favorites because they added John Tavares. Well the Chicago Blackhawks added Jonathan Toews. The Captain is back and better than ever. This team overall is not as talented as the Cup teams, but that doesn’t mean they suck. If they work, they’ll win. Long way to go, and plenty of areas to improve, but if you can’t enjoy watching this team and pulling for this team then you’re dead inside because they’re fighting their asses off to start the year and it’s beautiful to see.

–Everyone was killing Cam Ward last night for giving up a touchdown to the Maple Leafs. Saying how the Hawks need to get Crawford back(which, of course they do), and Ward stinks blah blah blah. Look, those numbers are bad through 3 games. However, even last night when Ward gave 7 there were only 2 that he probably should’ve had. The OT winner Ward absolutely should stop. Even the Tavares goal that beat Ward short side…even though you’d expect him to make that stop, Rutta and Hyman were right in his line of sight. 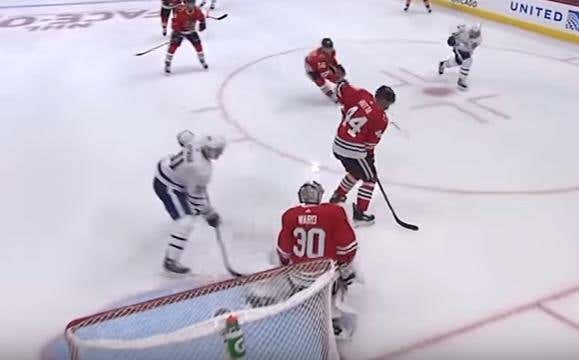 Not exacly and easy stop against a guy who gets paid 11 million dollars per year to do exactly what he did from the dot and that’s wire it passed a goalie’s ear. I’m not done being the conductor of the Cam Ward excuse express either…third game in four nights and the second half of a back-to-back. Last night was the ULTIMATE play-your-backup night, but Joel stuck with Ward because he’s been making all the stops you want him to make and keeping the Hawks in games. It also might speak to how little confidence the team has in Anton Forsberg.

Perhaps Ward just ran out of gas. I know the numbers don’t reflect it, but if Ward plays how he did against Ottawa and St Louis then that’s good enough and light years better than the goaltending situation in 2017-18. There is such a thing as timely saves as well. You need to make the stops when they have a chance to alter the game and Ward did that the first two games of the year. Last night got away from him, but if your defense gives up a ton of high danger shots to Tavares, Matthews, Marner, etc…it wouldn’t matter if Dominik Hasek was in net. Goals are going to go in. Crawford coming back and being Corey Crawford is OBVIOUSLY vital to this team’s big picture goals, but Ward has been a fine goalie through 3 games.

–You know who has been better than fine? Our beautiful boy Henri! Jokiharju has been sensational through three games and seems to get better every game, every shift, every minute. Jokiharju was a first round pick for a reason. Great skater, good puck skills, and can run your PP. His brain is what is setting him apart though.

Imagine being 19 years old and one of the scariest weapons in the game is barreling down on you in a tie game. Your heart would be thumping out of your chest. Not Henri. Henri just takes Tarasenko wide and promptly puts him in his back pocket. That alone would’ve been impressive, but it’s how Jokiharju finished the play that got me excited. Most defensemen, especially most defensemen on this Blackhawks team, would have taken that puck and fired off the glass and out of the zone and then exhaled because they lived to fight another day. The Blues would retrieve it at their own blue line and immediately go on the rush again. That’s not what our beautiful boy did. Cool and calm he just drops it back to Keith and the Hawks maintain possession and head up ice with the puck. That poise and those little deft plays are what separates him from most. He’s doing all the little things right and now he’s even lighting up the scoreboard. His 3 assists last night give him 5 on the season which leads the entire NHL through the first weekend of the season. Jokiharju coming in and giving the Hawks legit top 4 minutes and matchups is one of the reasons why they’ll be in the mix for the playoffs.

–The rest of the defense…not as great. Gustafsson has been marginally improved since last year, but I’d feel much better about him if he were the Hawks 6th defenseman instead of in their second pair. Stan Bowman gushed about Manning after signing him this summer, but he’s already getting third pair minutes with Seabrook. At this rate it won’t be long before Davidson/Forsling/Murphy come into the team and replace Manning on the left side with Seabrook. Rutta has been fine, but he’s another guy who probably belongs in 3rd pair or as an in case of emergency depth defenseman. Basically the Blackhawks have at least 3 guys on defense right now who probably shouldn’t be on the team. That’s a problem and it’s a big reason why they’re giving up a ton of chances and also why, once again, they’re having some issues exiting the zone with possession.

The Blackhawks have cap space and some interesting assets. Realistically, even with a healthy Crawford and a rejuvinated Jonathan Toews, the Blackhawks need at least one more top 4 defenseman, and one more top 6 forward. They’d be able to properly set their lineup if they were able to acquire pieces like that. As I’ve said…the cavalry is coming on defense. Ian Mitchell likely has the next closest ETA among their prospects and I fully expect him to have a similar wunderkind type debut to his career.

It’s not as easy up to figure out up-front. Kahun, Saad, and Kunitz are all probably playing on a line above where you’d want them to be. I think maybe the solution is to throw John Hayden on LW with Kane and Schmaltz. He will go to the net, bang bodies, play smart and hard. Saad drops down to the 3rd line with Anisimov and Kampf and suddenly that line has some speed and quickness. 4th line becomes Kunitz-Johnson-Kruger. As it is right now the Blackhawks don’t have enough speed or depth through their lineup and can’t effectively roll lines. Toews and Kane have been sensational to start the year, but you also don’t want to wear them out by Thanksgiving by playing them 23 minutes a night either. The Hawks need to find a solution and believe that solution is staring them in the face 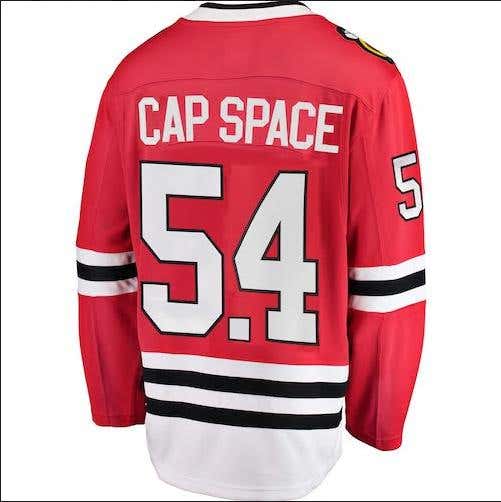 Go get Mark Stone. Do it Stan. The Blackhawks traded for Brandon Saad because they wanted him to replace Hossa’s minutes. 18 minutes per game of playing the right way…well Saad does a lot of things well, but he’s not Marian Hossa because he doesn’t have that offensive ability. He seems to be around the net more and that’s great, but Stone has a shot that can score from anywhere to go along with that great two-way game. He’s the winger they need. Everything would be slotted better if they were able to pull that trade off.

So the team isn’t a finished product. It’s not a true Cup team as it currently stands, but god damn it I love this team. I believe in this group. I am having fun watching the Blackhawks again. I am having fun watching this team climb the mountain again, because I do believe that’s where they are going. Back to the top. The roster needs more tweaks, not an overhaul. Let’s enjoy the ride.