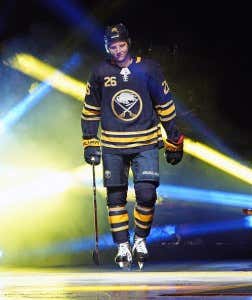 I’m usually the guy who refuses to listen to fan made songs. I hate them. I hate them so much. You don’t have anything better to do with your time but to make a full length music video about someone who doesn’t even know you exist? But this one, this one is different. A fan made a cover of Dolly Parton’s Jolene about the new Buffalo Sabres defenseman and #1 overall pick, Rasmus Dahlin.

Before you absolutely tear me to shreds, give it a listen. It actually isn’t that bad. Some nice vocals, some good lyrics. I listened to it with every intent to rip it apart because someone told me it was actually good, but I couldn’t. As hard as I try to knock this I can’t. Try to find me one thing wrong with this.

Dahlin played in his first NHL game last night and honestly, he didn’t impress. It was his first NHL game though, I’m not an asshole and going to write this kid off already. He’s a franchise changing defenseman, he just had a rough first game. He struggled to be that one man break out he was touted as. But the kid is 18 and the Bruins came out buzzing. Not much Buffalo or Dahlin could do.

Either way, this song is pretty sweet.