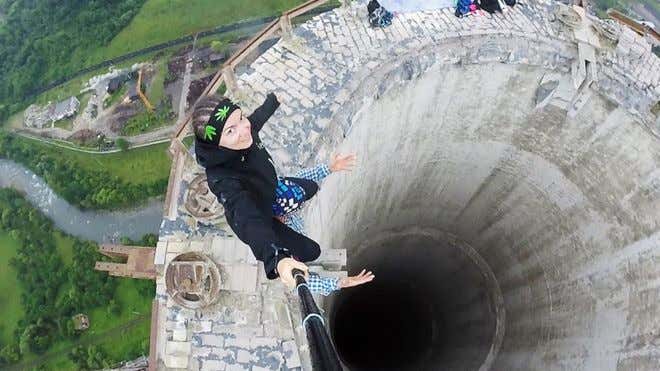 Researchers at the US National Library of Medicine recommend that ‘no selfie zones’ should be introduced at dangerous spots to reduce deaths.

These would include the tops of mountains, tall buildings and lakes, where many of the deaths occurred.

Drowning, transport accidents and falling were found to be the most common cause of death.

But death by animals, electrocution, fire and firearms also appeared frequently in reports from around the world.

In July this year, 19-year-old Gavin Zimmerman fell to his death while taking selfies on a cliff in New South Wales, Australia.

There but for the grace of god go I. If I had a nickel for every time I climbed to the highest point of the highest construction crane in my city in order to take a picture that’s caption read “hi haters” and a link to my podcast feed, I’d have enough money to buy a delicious New York slice and rate it under the One Bite App so all my friends could see.

They found that selfie-related deaths are most common in India, Russia, the United States and Pakistan and 72.5% of those reported are men.

Hmmm. That’s a shock. Shoutout Pakistan for getting in there with the big boys of selfie deaths. Movin on up in the world. Anyway, here’s a video that was certainly worth the risk.