Last Monday Night Football a Natonal Audience got reintroduced to my favorite position- the Fullback and folks I for one could not be more exited.

The fullback has fallen out’ve favor in todays NFL- replaced by “faster,” “more atheletic,” players with “better hands”, and “the abilty to get open against man coverage.” But theres simply no replacing the fullbacks abilty to set a edge, and gain 3 yards and a cloud of dust and get the crowd on there feet. Watching a fullback juke one person is like watching a dog carry a seemingly impossble large stick across a yard. It gets the crowd going, and makes his teamates beleve they can do the impossible.

The old saying is you gotta zig while others zag, but the ultmate zig is to not zig and instead add another inch to your neckroll and get downhill on someones ass with reckless abandon like Sonny Bono no offense. So nowdays we’re seeing a rennaisance of the position- guys like Janovich, Develin, Bohannon, Olawale, and Juscyzyckyk are turning it back into a household name.

So I wanted to take this time to educate the youths of Amercan on what a fullback is and what the history of the position looks like. One thing I noticed looking through the achive is that the surest way to spot a great FB is by the “fullback tilt” where they are kindve tipping over when they get the ball because there not sure if they want to kill you and take a poop. So without farther ado heres my officall ranking of top ten fullbacks of all time taking into account there blocking abilty, rushing abilty, and fullbackness.

Rushing abilty: 7 (this is actualy bad- the lower the better)

Look at this guy. The prefect fullback aesthetic.Body allways tilted at 24 degrees with a slight look of discomfort whenevers hes actualy touching a football instead of going hunting for his dinner 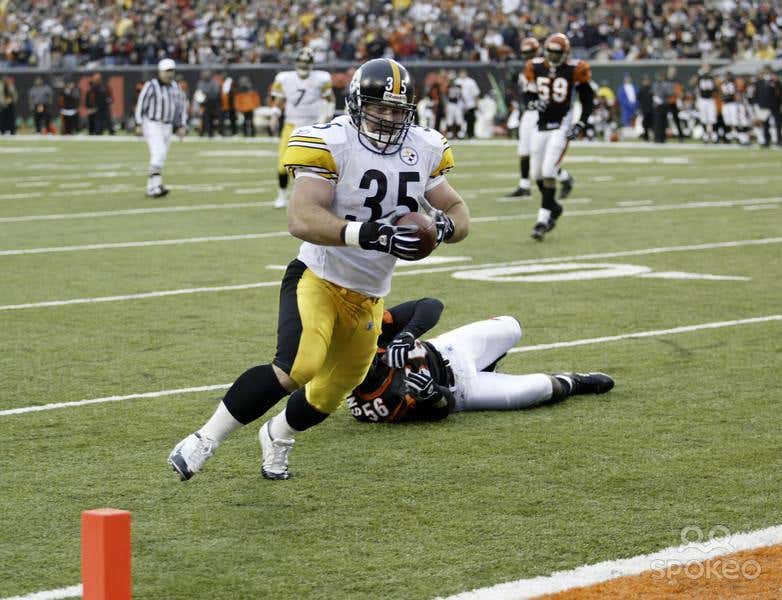 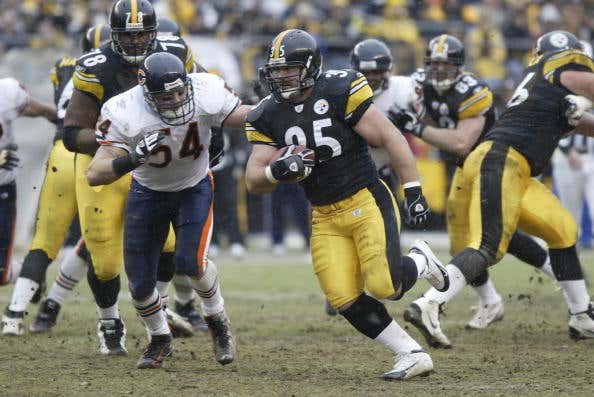 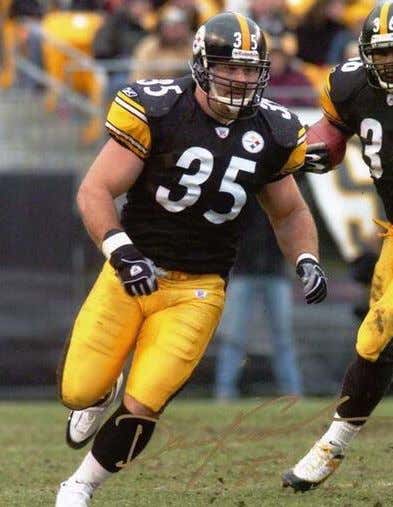 Bonus points for the mustache which is a holdback guy for your mouth to ensure you allways speak to the officials repsectfully. Kreider averaged a flashy 4.5 ypc over his career which throws your offense out of sink and you wind up playing in front of your sticks. He blocked for Jerome Bettis which meant his job defnition was to get thrown under the bus. Ultmate team guy. 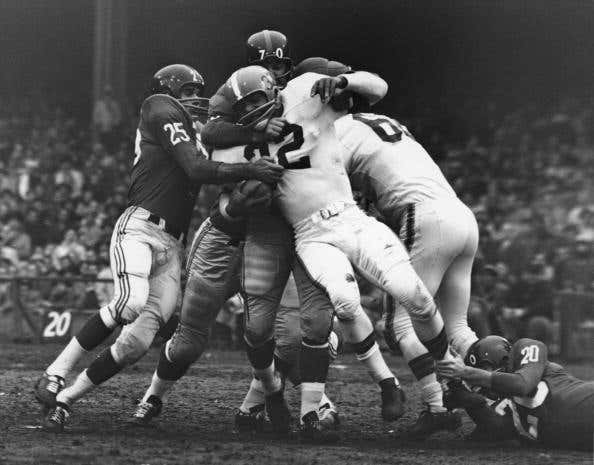 Yes, Jim Brown was technicaly a fullback, and he did save the world from Aliens in Mars Attacks, but he’s number 10 on this list on account of he was simply to good at running with the football to ever be considerd a true ambassador for the position.

They say a Cornerback is just a Wide Receiver who cant catch, well a running back is just a fullback who cant hit. Sure Jim Brown could run you over but he’d just as soon run around you. Back in the day football was a giant game of chicken, where you didnt want to deal with any bull, but JB decided he needed to keep his face in game-shape so he could be a star of the silver screen. Folks this guy avoided contact so much they called him rec specs. 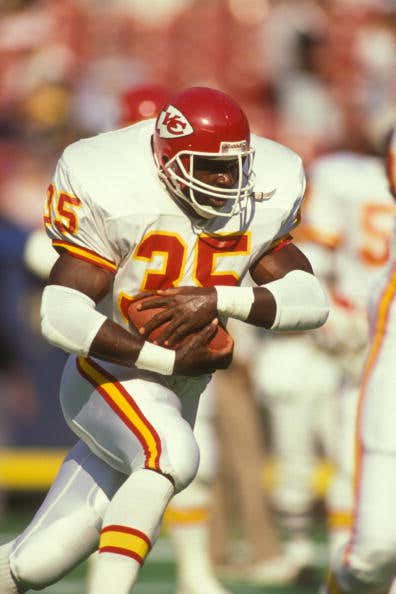 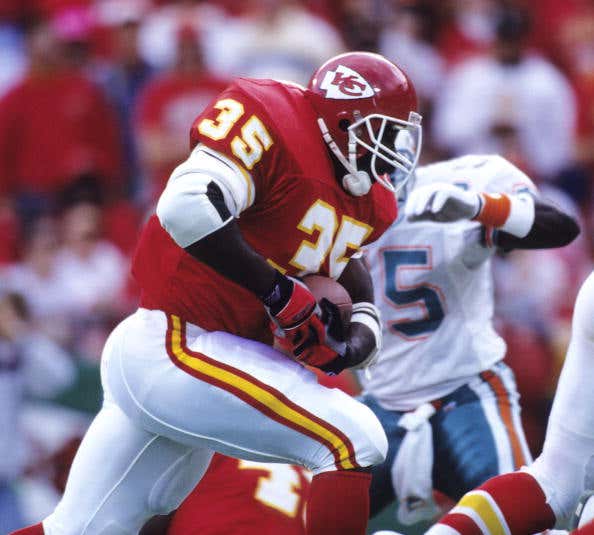 The orignal Nigerian Nightmare no offense to the 2018 World Cup preformence. Trying to tackle him is like trying to tackle a house with a chinstrap big enough for Peyton Manning to use as a pillow. I took off points because he had a season where he ran for 1400 yards which is way too many allmost like he was afraid to get tackled. A long TD is proof that you shy away from contact so I had to take a way points.

Heavy Legs. Virtualy every picture of him is him doing the fullback tilt 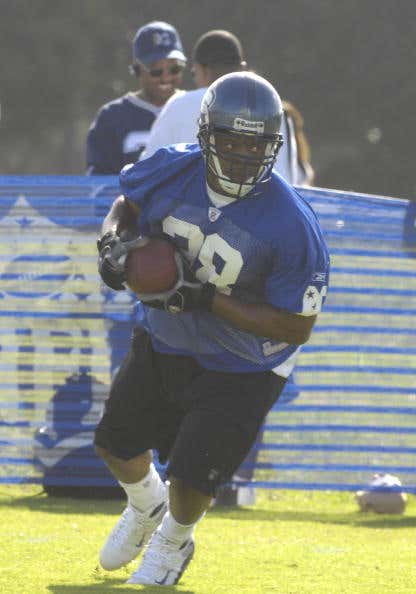 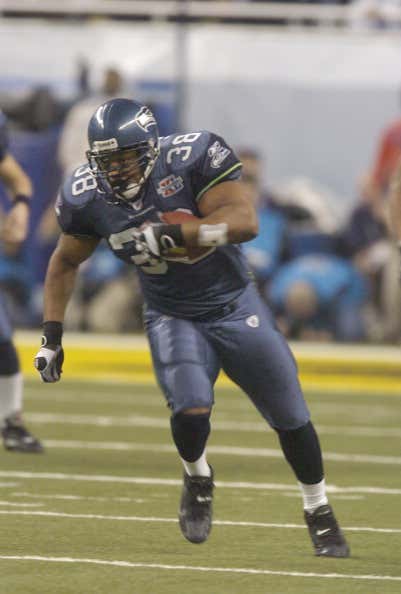 Yes Strong was a legitmate rushing threat at times but credit for him he didnt feel the need to score touchdowns- thats a flashback territory inside the five and he knew his job was to go out there and get a FB assist. Great name, but minus points because he shared a backfield with Shawn Alexander and wasnt a strong enough leader to teach him that the sideline has never missed a tackle and that he is making him look soft by assocation. Again, great name.

Blocking ability: ??? Barry Sanders was running behind him so its impossble to know 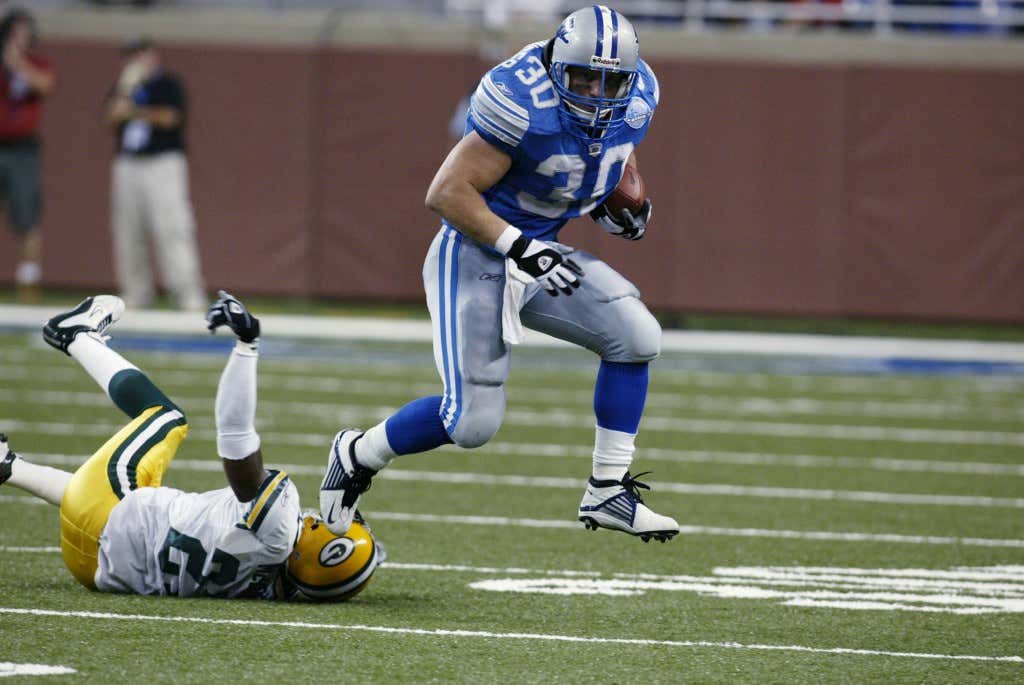 Another perfect fullback tilt pictured above. Problem with gauging his blocking abilty is who knows maybe he was a great blocker and Barry Sanders wasnt that good he took bad angles and missed the hole alot and got himself in hot water just so he could put up cool highlights. Whose to say trying to figure out if hes good or not is like trying to run a scantron test filled out in blood.

Sclessinger was reported to of broken over 200 facemasks in his career at Nebraska, and later at the Nebraska of the north- Detroit. Not sure if this is true or not but for the purposes of this blog, lets assume that its gospel. 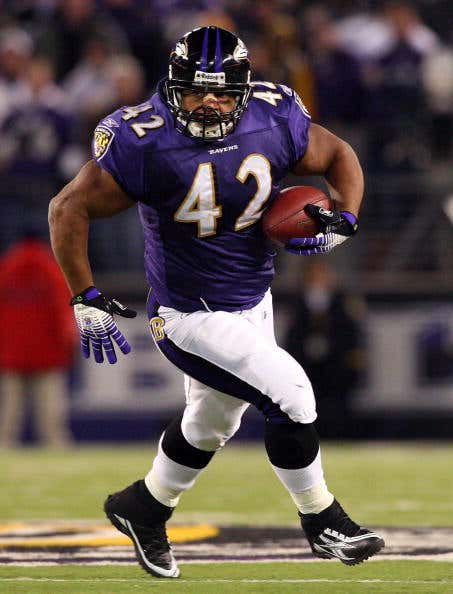 Awesome name, most intimdating neckroll. This is a guy. 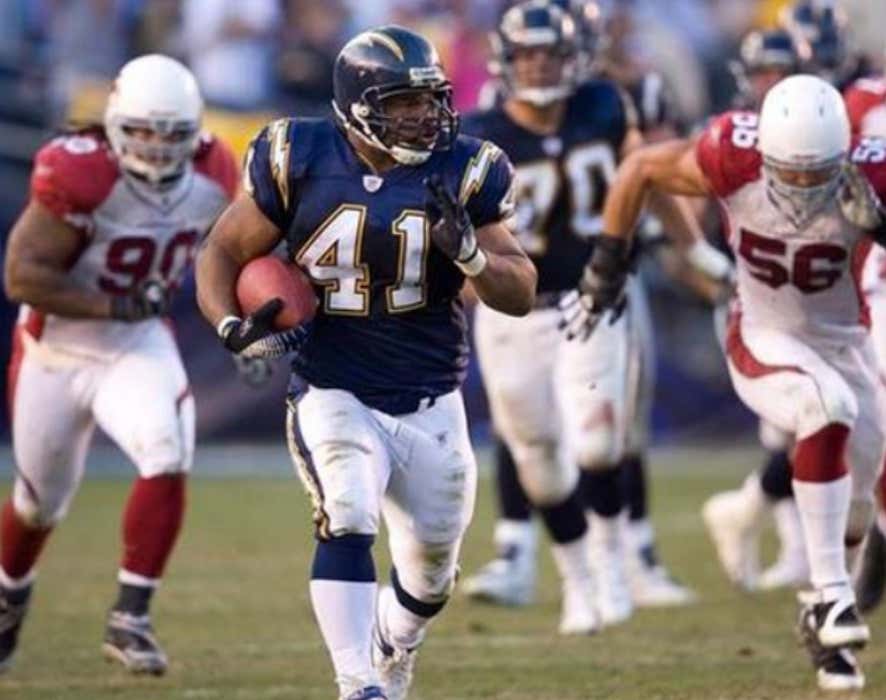 People forget that he was so unselfish he handed the ball back to Frank Wycheck on the music city miracle and said “here you take it I just wanna block.” 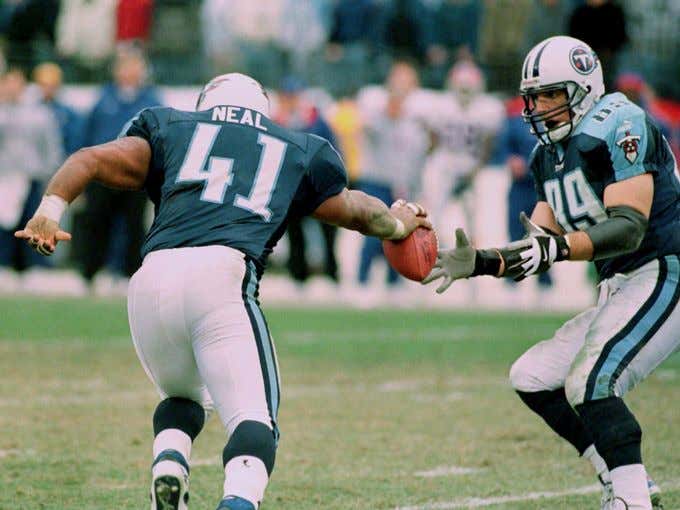 Lorenzo Neal blocked for a 1000 yd rusher for 11 CONSECUTIVE SEASONS thats a stat that will never be broken probaby because no one keeps track of it officially- thats a fullbacks code. Sure he had a LT but he was bLT in charge of blocking, brusing, beers, and being big. In retrospect Neal could of been as high as 2 on this list but his commitment to the principle of low-man winning made me drop him to number 5.

Fun Lorenzo Neal fact: Both him and Mike Alstott were on the same Bucaneers team during the 1998 season. There were no survivors 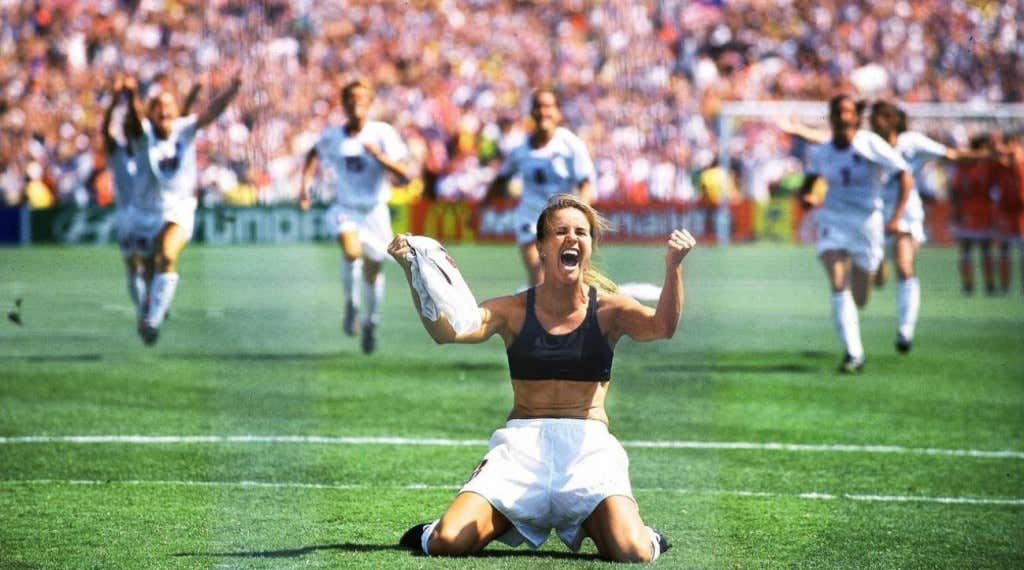 Nothing grittier then winning a game in which your team dosen’t score any points at all. The Chinese womens defense put 11 in the box and dared the US to pass. To the Chinese’s credit, we  coudnt do it, but then Brandi came up big in PKs and took her shirt off in celbration. A sports bra is just a Cowboy Collar for your nipples folks. 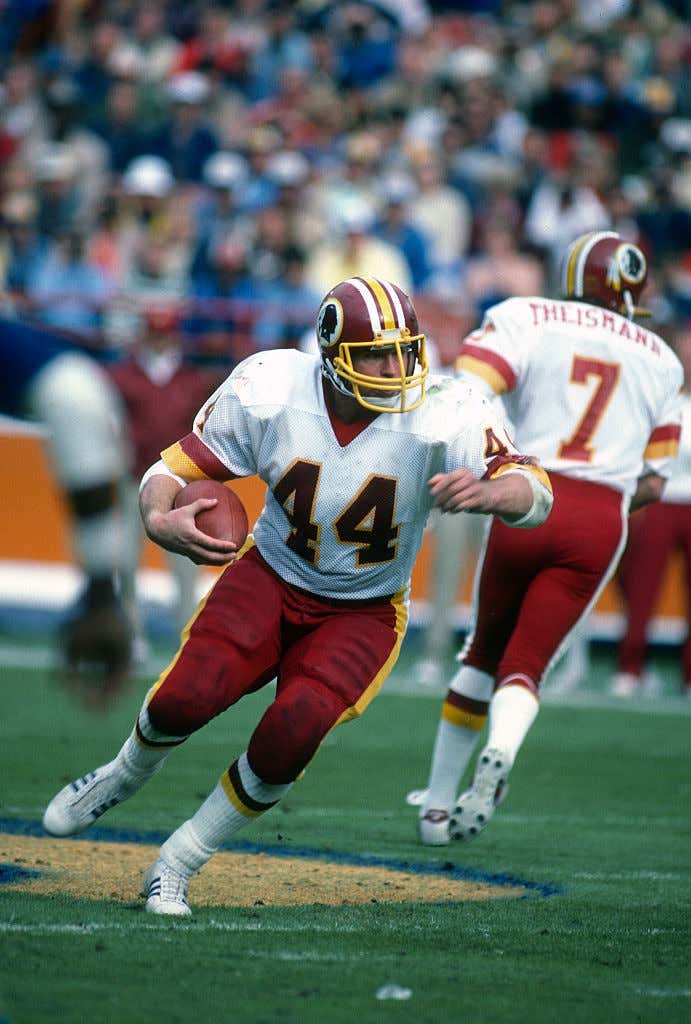 The storys about Riggins are incredble. There’s the one about Joe Gibbs conducting a offensive meeting to be interupted by the sound of Riggins in the back of the room laying down while pissing straight up into the air onto his own body, and Gibbs having no choice to ignore it because hed rather have Riggins pissed on then pissed off. The time Gibbs went to his house in Kansas to beg Riggins to come back and Riggo greeted him at the door with a open beer in his hand at 9 am. The one where he got drunk at a Washington black tie affair and told a bunch of dirty jokes and told Supreme Court Justice Sandra Day O’Connor to “Loosen up Sandy baby, your too uptight.” And then he proceeded to pass out under the table.

He was nickname the diesel because he ate lead. His most famous highlight was accdentally rushing for a 43 yd touchdown on 4th and 1 where he was only trying to get 1 yrd. He hosted a football analysis show next to his woodpile where he woud split logs like they were defensive tackles while he complaned about candyass players like everyone who was currently in the NFL.

His neckroll was so big you coudnt even read the name on the back of his jersey- thats how much he cared about the name on the front. He played his first two seasons with his name mispelled as well and didnt say anything because thats how badly he wanted to avoid another L. Boomer used to say your in good hands with Alstott, but I like to say some ball carriers are All-stats and some are Allstotts and everyone has to make up there mind in life which one you want to be. 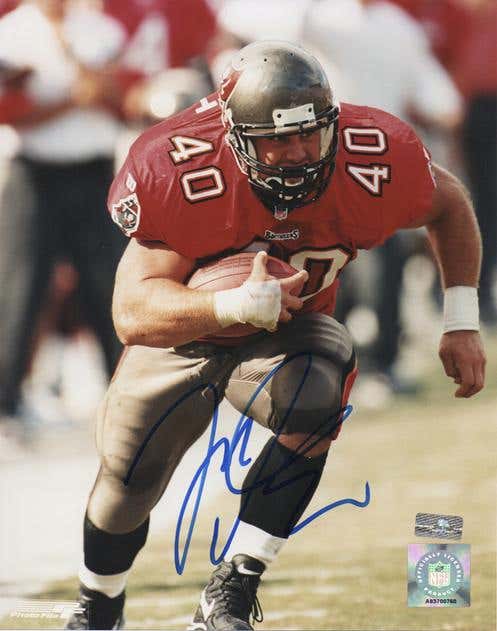 They called him the A-train because he was allways on time and his padlevel was lower then a subway system.

John Kuhns name is so synonmous with being called a fullback that even if he wasnt a fullback, crowds would of somehow figured out and chanted “Kuuuuuuuuuhnnnnn” at him any ways.

His careeer YPC is the prefectly ideal stat for any fullback to aspire to:

You need 1 yard? Hell get you 3. You need 5? Hell get you 3. perfect consistency. “Three yards and a cloud of dust” was the prefect nickanem for when he shared a backfield with the cheeto encrusted Eddie Lacy. John Kuhn describes “grit” as “the abilty to get lower than a dead dinosaurs lunchpail” and folks thats really all you need to know. 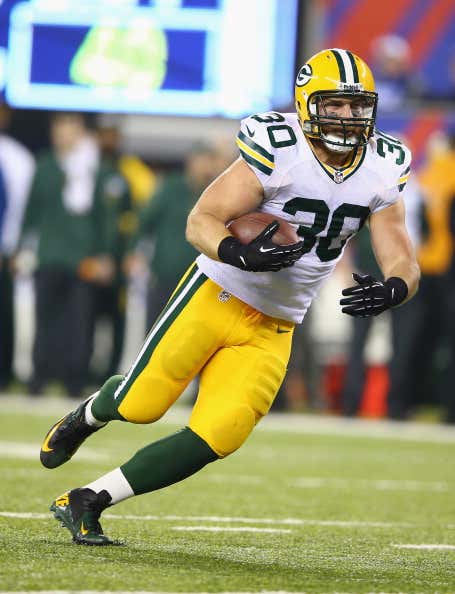 In the 2017 NFL season, Kuhn would get released every Monday, then signed every thursday by New Orleans because if Jesus only needed three days rest before becoming a saint then so did he.