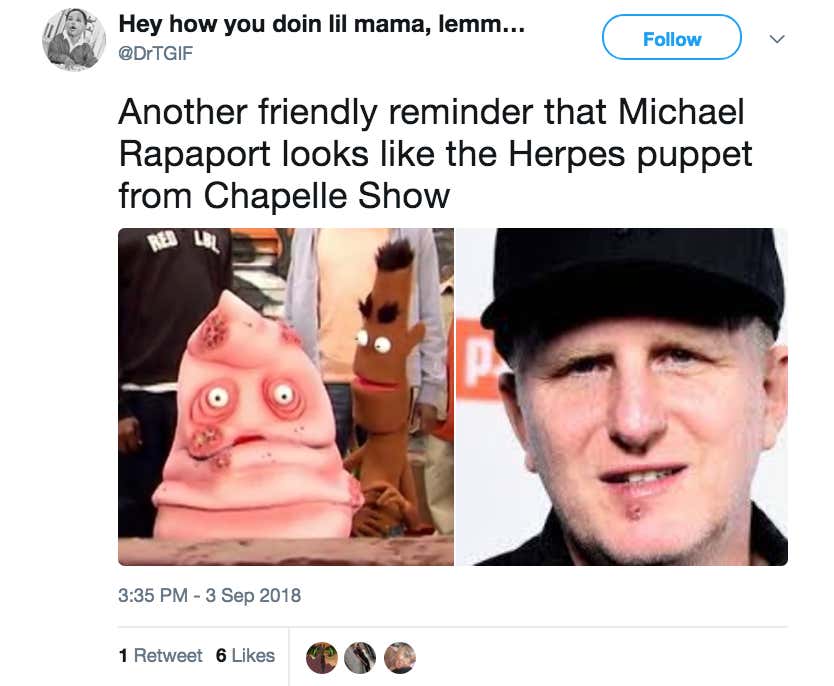 [Editor’s Note: This is solely a Clickbate Smits REBLOG in the defense of my main main, Smitty. That scumbag fraud of a cowardly hack Michael Rapaport cited this post from 2017, among others, as evidence of defamation in a lawsuit against Smitty (and others at Barstool Sports). I just thought I’d make it easy for the courts and share it again. No digging around for evidence, no smokescreens. All facts. At noon of each day I will be releasing said facts for the courts. Michael Rapaport, like Dan Marino, should die of gonnorhea and rot in hell.]

WOW. So this happened today on Undisputed during the show’s daily 4-hour segment on “Who is the GOAT – Jordan or LeBron?”*. As if getting fired, murdered, then having your corpse dragged through the Internet streets over the weekend wan’t enough, Michael Rapaport returned to national TV to become even more of a hypocrite. The pasty deadbeat fuck owes everyone around town money and has the gusto to call out NFL HOF’er Shannon Sharpe for not owning up to a bet? What a fucking fuck of a fuck.

This lying hack of a fraud really doesn’t live in this reality, does he?

(This blog was almost verbatim but had a vid of a former Barstool employee in it I took out. You can Google the original blog if you wanna see who it was. Clicks!)

*An actual, legitimate statement by by Shannon Sharp for who is the GOAT was, and I quote, “You got Michael Rapaport, Michael Phelps, Michael Jordon…there’s only 1 LeBron”. Goddammit I hate TV. And humanity.