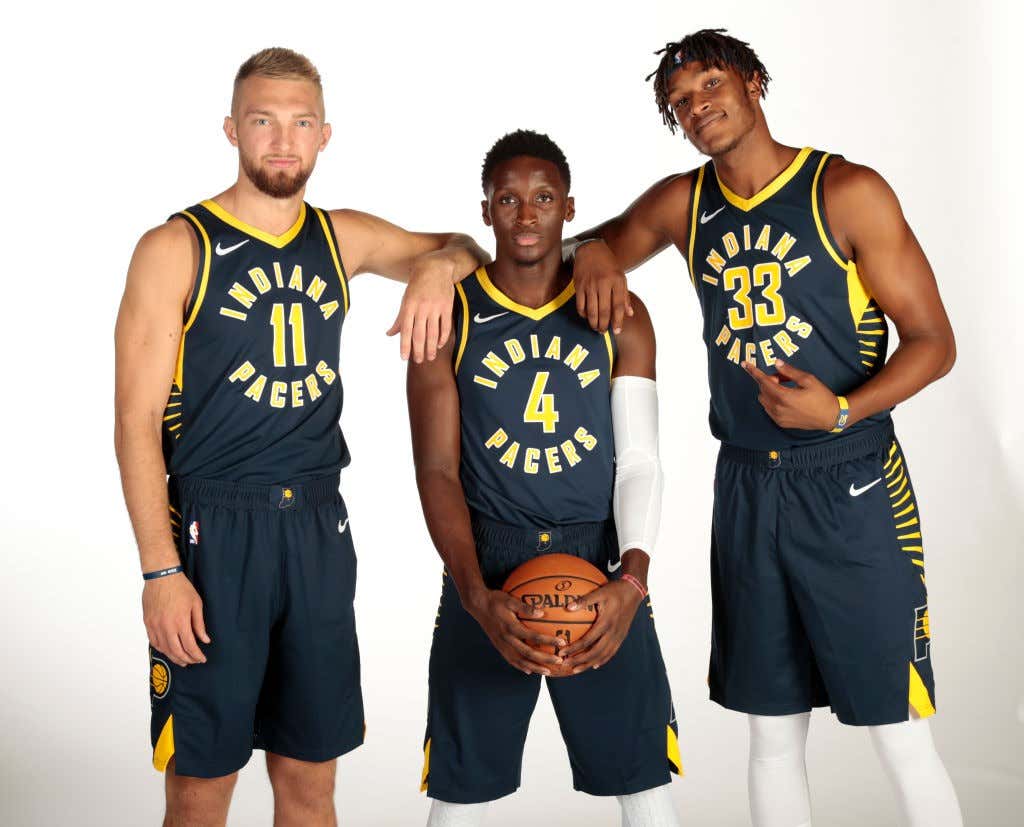 Finally, we can talk about the Pacers. I’ve thrown them in polls before in hopes that there were enough Pacers fans out there to push them through, because in my mind they are a fascinating story heading into the 2018-season. A team that many clowned when the Paul George trade first happened last summer, the Pacers came out and shut all of us on the internet up real quick. With a somewhat wide open Eastern Conference, I’m sure there are Pacers fans out there thinking “why not us?” when it comes to who may come out of the East come the Spring. However, before we get ahead of ourselves we should first look back and remember just how much fun their 2017 season was

Pretty awesome stuff. Last season’s 48 wins were not only 17 more than what Vegas had them at last October, but it was also their most wins since the 2013-4 season and third highest win total since the 2003-04 season. Their 109.5 Ortg was the highest it’s been since 1995 when they went 52-30 and lost in the first round of the playoffs. Safe to say, last year was one of the better seasons in Pacers history. That’s not being dramatic, just telling it how it is. Which is why there is plenty of reasons to be excited for this Pacers team because guess what, they got better. First, let’s look at their roster as it stands today 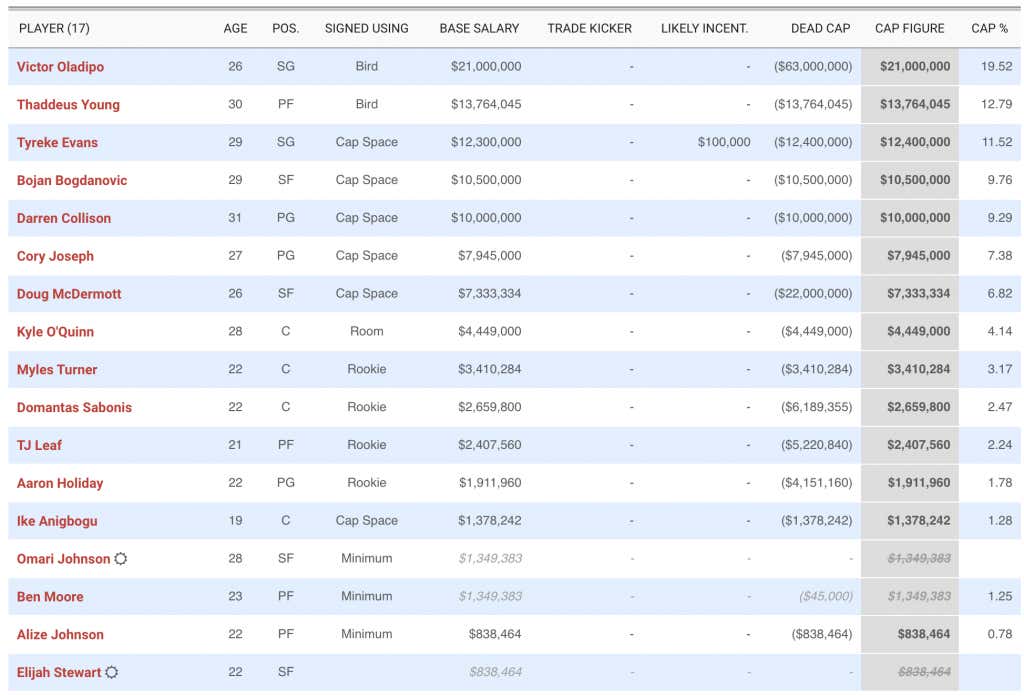 Here’s the best part. This roster right here? Only costs the Pacers $107,592,472 which is good for the 23rd most expensive roster in the NBA. They’re around the Knicks, Hawks, Bulls, Suns, Mavs, Magic etc. How many of those teams are legit contenders? Outside of PHI and their $104M cap number, you will not find a better return on your investment than what is currently going on in Indiana. Essentially all of the contenders right now in the league have a Top 18 cap number, so the fact that the Pacers head into this season as one of the only teams with legit luxury tax space, that’s a great thing to remember once they figure out their needs come this year’s deadline in February. They also have the 9th youngest roster in the league with an average age of 25.1, so they are essentially set for the foreseeable future and their window hasn’t even really opened yet.

In looking at their difference from last year, it’s hard to complain about the talent they added. Tyreke Evans is coming off a career year and can be used at multiple positions, Dougie McBuckets provides some additional shooting for a team that averaged just 9.0 3PM a night (25th), Kyle O’Quinn is for sure an underrated big who knows his role, will attack the glass for you and can provide great energy off the bench, and Aaron Holiday looks like a great piece to have in terms of guard depth. However, for this team to really make a jump this season, it’s very clear they need to be much better on the road. Just 21-20 last year, that’s to be expected given this is a fairly young team that was just figuring out how to play together, but they tied BOS with 27 wins at home so if they can figure out their road issues this could absolutely be a 3 seed.

So what was the basis of their success last season? You would think the breakout year from Oladipo had a lot to do with that and you’d be right, but you also have to credit how the Pacers chose to use him. Oladipo is a great one on one scorer, yet the Pacers did a great job of limiting his isolation possessions. He ran iso just 10.3% of the time, and while that was more than double what he ran in OKC, the Pacers did a great job of utlizing him in other ways that were more effective. For example, instead of just giving him the ball and getting out of the way, they ran P&R with Oladipo over and over until someone proved they could stop it.. Here’s the thing, nobody really did. The Pacers ran this 18.3% of the time, averaged 0.87 points per possession (9th in the league), and had the 5th best scoring frequency out of this set. That’s the backbone of this offense and when you have a guard like Oladipo and a versatile big like Turner who can both knock down threes and put it on the floor, it makes sense why this was such a valuable weapon for them.

Oladipo is so good at splitting that double team I’m not really sure how you defend against it. The thing is, they don’t have to just rely on Oladipo/Turner for this set. They can be equally effective with running it using Sabonis as the screener and someone like Collison running point.

What stands out to me when looking at this team is normally when you have the type of success the Pacers did, you usually are all over the Top 10 in team stats. Well, the Pacers were 25th in threes, 22nd in rebounding, 23rd in assists, 25th in blocks, 12th in Ortg, and 12th in Drtg. So how did they win so many games? Well, their defense is no joke, especially when it comes to steals where they ranked 3rd in the league and 2nd in deflections. That’s a problem because this team in transition is no joke, as they had the 5th most fastbreak points in the league. The Pacers were great at guarding the three point line as well, leading the league with 25.9 contested 3PA a night. They also almost never turned it over, so when you add all that up it starts to make sense. They have two legit weapons in Turner and Oladipo, they work the passing lanes better than most teams in the league, they can score in transition and defend the three point line. Not a bad formula.

But let’s be honest, for the Pacers to be taken seriously, not only is Oladipo going to have to back up his production from last year, but Myles Turner is going to have to take a leap. I think any Pacers fan will tell you he’s a bit underrated when you talk about young promising centers in the East, and I have to agree with them. He doesn’t get the same play as someone like Embiid, and obviously Embiid is the better player but we need to be talking more about Myles Turner. He’s JUST 21 years old, and has improved essentially each of this first three years in the league. Now he’s a legit three point threat in this offense, and I think last year’s playoffs where he put up 61/46% splits was a bit of a coming out party for him. I’m interested to see if his improved shooting ability opens things up even more for the IND guards, but also if it helps them improve in one glaring area: Catch & Shoot

You see the Pacers were below average in this area, which is pretty important when you factor in how they play. All that driving by Oladipo/Collison/Evans is going to have guys open more and more for catch and shoot opportunities, which is why I like the signing of Dougie McBuckets, even if they overpaid. It’ll also be interesting to see how TJ Leaf looks in his second year, as he was more than solid in catch & shoot situations, but played just 53 games.

The challenge for IND is they are now no longer going to sneak up on anybody. They have that rare mix of heightened expectations and a potential target on their back because everyone is predicting another huge year for them. This is a team that has not been past the first round since 2013-14, but now that LeBron is gone it wouldn’t shock me if they got back to the same sort of postseason runs like they had during those prime PG13 years. Often times when you’re forced to trade your franchise player it usually sends you into the Lottery and back to square one. The Pacers not only didn’t tank after the trade, but I would argue they are even better than they were in 2016-17 pre-trade. I’m so intrigued by their frontcourt of Turner/Sabonis and they may have some of the best guard depth in the entire East, which will be crucial during the grind of the regular season. If they can find a way to lower Oladipo’s usage from the 30.1% it was last year to maybe something like 25 or 26% so he can save his legs for the playoffs, then they’ll really be scary. Remember, this team was about as close as you can get to getting past LeBron last year, so they should absolutely be taken seriously this year as a strong contender.

It’s been a long time since we’ve had to take the Pacers seriously, but it doesn’t look like they are going anywhere any time soon, so you may as well get used to it. I’m not saying they are already at the Reggie Miller glory days, but they’re certainly on their way.