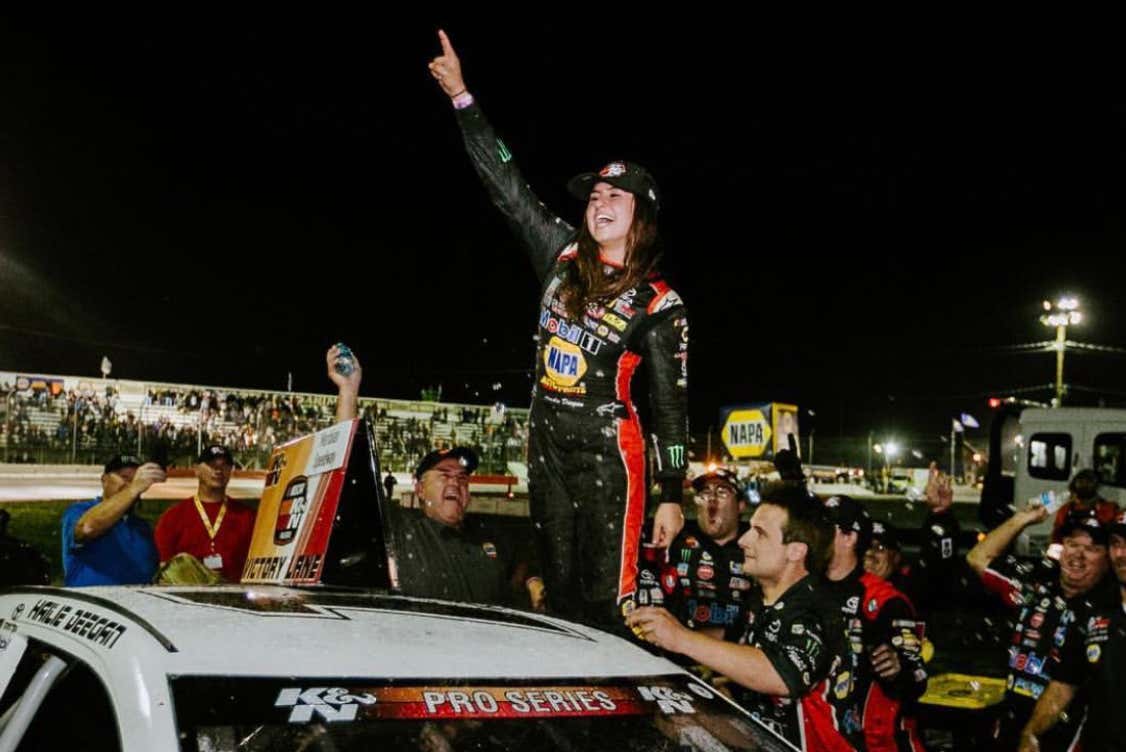 Deegan is the daughter of X Games motocross rider Brian Deegan. Her victory came in her 18th start on the NASCAR K&N circuit.

The teenager from Temecula, California, led only one lap in Saturday night’s race, the last one. Deegan had two previous runner-up finishes in the series and said after the race she had imagined the winning move the night before while lying in bed. Deegan said her plan was to nudge the leader just enough to make the driver wiggle and create room for the winning pass.

Rouse also is seeking his first career victory. He complained Deegan got into his car too hard for the bump-and-run. Deegan drives for Bill McAnally Racing and is leading the rookie-of-the-year standings.

I know what you’re thinking. You’re thinking I’m going to sit here and make a bunch of jokes about how ladies can’t drive. How they pump the brakes and lack spacial awareness and can’t parallel park and blah blah blah. Well guess what? I’m not going to. A) because it’s untrue and B) because Hailie Deegan just put those rumors to bed. SEVENTEEN-years-old and CRUSHING it behind the wheel. The craziest part? She won the race using the Shake N Bake. A move perfected by Cal Naughton Jr. and Ricky Bobby.

Credit to whoever her racing partner is for giving her the bump. Hopefully she’s okay with finishing in second place because obviously with Hailie, “if you ain’t first, you’re last.” Here’s her last lap.

I don’t know much about racing but it definitely seems like the sport is getting younger and less white- trashy. Lando Norris is eighteen-years-old and he’s crushing overseas. Who knows maybe in a few years people under the age of sixty and above the Mason-Dixon Line will start to care about the sport. Congrats to Hailie, though, major accomplishment.