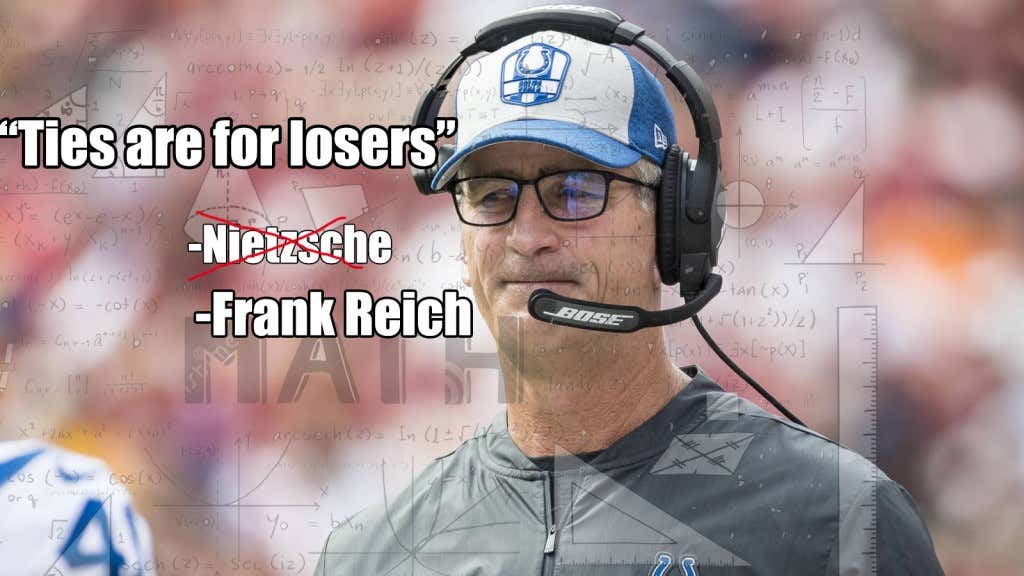 Were a quarter way through the NFL or in other words we’re a hundered percent done with season one of the 4 game season I break down a complete season into for compartmentalization reasons. So now that Chris Long is back to accepting a salary that I pay to HIM- not to children to teach them how to read Noam Chomsky or whatever, we can start to assess whats been good and whats bad about the NFL league year so far.

The offenses have become Mickey Mouse and the All 22 is looking more like a very goofy movie as the QBs are protected so much youd think they were nomnated for the Supreme Court. Out in Oakland they were playing through the W in whistle, and in Green Bay Clay Matthews has adopted a new technique of hugging the QB until he passes out from embarasment. At this point the NFL should just offer Vontaze Burfict a deal and say if you agree to a 8 game preemptive supsension you can play as dirty as you want for the rest of the season. Kind of a arbitrage situation there that I think both sides would enjoy. And now its time for the first suspensions to be over as Mark Ingram, Juulian Edelman (because he can fit in your pocket and he hits hard), and Burfict are all coming back this week just in time because I was getting bored with the current cast and same worn out storilines like Patriots being declared dead and Sean Lee and Leonard Fornette

Besides all this One thing I do seem to enjoy is coaches not wanting to have ties because there too confusing to think about.

The big question to unpack is “are ties worse than loses? Technically yes because you don’t learn anything from them. Football is a game of black and white- winners and losers, good and bad, ‘elite’ and ‘are they elite?’. If you start introducing new shades of gray to the situation Matt Patricia will just try to invent a new uniform out of it. Frank Reichs questonable playcalling and decision-making actualy proved that the Colts are the real winners of yesterdays Colts-Texans game. You see, Reich would rather see the Texans win than have a tie- therefore he is the true owner of the win. Reich was quoted as saying “ties are for losers” which is probably the most philosolphcally interesting thing I’ve ever heard come out of the mouth of a head coach besides the time Jeff Fisher had Schrodingers Pat when he thought Danny Woodhead still played on New England 3 years after the fact. In my opinion, a tie should count as a loss for both teams since it is indisbutable that neither team wins, and to further distinguish football from soccer.

Plus when you take into account lost wages from having to pay football journos extra money to sit down and figure out complicated tie-breaker scenarios at the end of each year your stealing from the fans who could be using that time reading about the writers coffee prefrences or favorite Springstein song.

Now that being said, Frank Reich may be the only person in the history of the world who looks dumber weargin a headset besides Michael Dukakis. The headset is typicaly a accessory that makes you look way smarter just like your wearing glasses. Its like that guy is hearing stuff Im not hearing therefore he’s well-informed. For whatever reason Reich dosen’t look natural in it Id rather see him raw-noggin it with nothing at all on his head. He needs to sort things out asap because right now he dosen’t pass my “if he was working at a hardware store would I recognize him if I needed help finding parts to make a beer bong” test, and thats a confidence issue for me going forward. 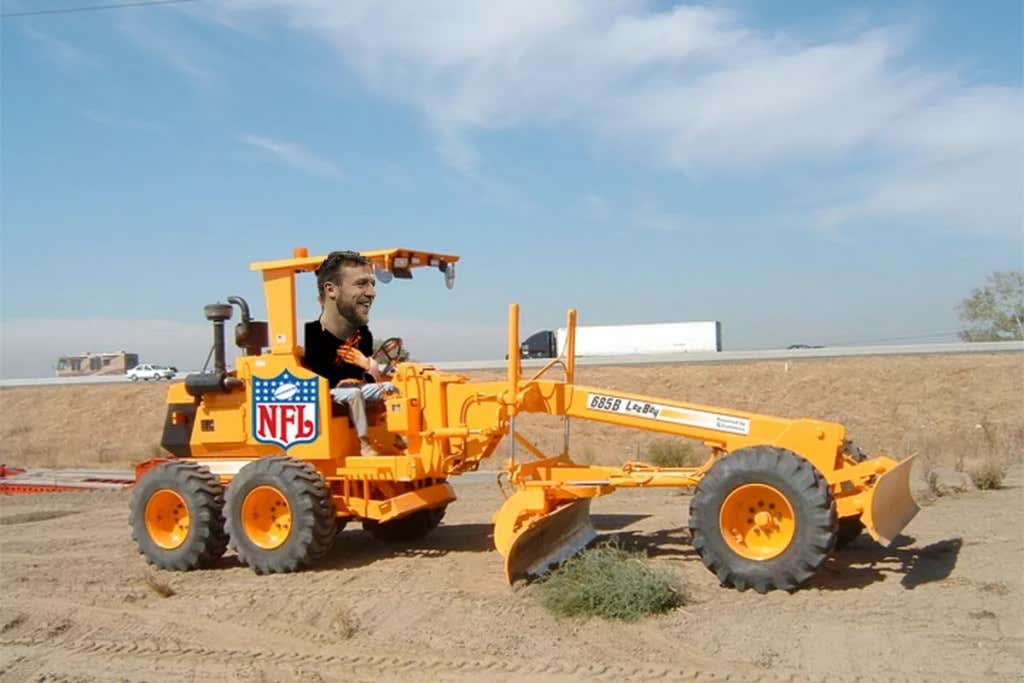 Sean Payton Is embracing Taysom Hill as a fullback who happens to be able to be a QB. The thing I like about Taysom is that he is Tim Tebow except 10% more Tim Tebow than Tim Tebow is. Hes 10% better at passing, 10% better at being a personal punt protector, and 10% better at being religous as hes full Mormon instead of this half-ass conservative Christan stuff. Tebow was home school but the Mormons took this concept to the next level and turned there entire state into one big homeschool since at the time of the creation of the state all the teachers were married to Brigham Young. He had a ten yd pass on a fake punt, a 20 yd run, and a 16 yd punt return. Hes a American Army Knife I dont use the term swiss because he dosen’t have any holes in his game.

1. Big College action game down in Happy Valley on Friday night with the Nittany Lions and Ohio State Buckeyes. Very approprate choice by Penn State to make this a White out game because both teams are so good at covering up past mistakes. James Franklin pulled a Joe Pa except he at least waited until the 4th quater to completely crap himself on the sidelines. Then as they were leaving the field he got into it with a fan who had the temerty to question his playcalling.

2. Christian Kirk and Jewish Josh ironcialy have quite a connection giving hope to all of us that depsite our diffrences we can come together to allmost beat the Seattle Seahawks. Rosen had his first start Sunday but no matter how good he plays the real 12th man in Arizona is the turf at Unversity of Phoenix Stadium which has now injured Kam Chancellor, Earl Thomas, and Darrel Bevells brain somehow.

3. These Ravens are the class of the AFC but they need a lesson in MANners.

Disgusting filth flarn filth. Congrats Eric on instantly turning your team from the good guys into the villans. But hey I guess when you have a beard like ZZ Top you live the hard rock lifestyle including language that would make a sailor blush.

Speaking of offensive Ravens Im not sure what exactly is going on with Lamar Jackson but I do know that he adds a extra dimension when hes in the game. When you run the wildcat with him you have to be prepared as a defense that its a dual threat where they can either run the ball, or they can call a timeout. John Harbaughs latest gadget play seems to be putting a QB out there on the field and not letting him throw the ball ever which is next level brillant strategy. They also lined up there Tight End Maxx “Dos Equis” Williams slightly left of center in a touching nod to former mayor O’Malley, who proceeded to leak up the middle and catch a pass for a first down. This is the type of gadget play/philly special that a younger version of Harbaugh would of referred to the FBI for a investgation if someone had done it to him but you live and learn and its only cheating if you get caught or if the Patriots do it.

4. Johnny Manzell wrote a letter to Baker Mayfield , the crux of which was that Johnny was telling him that they are two different people or in other words basicaly the opposite of the plot of the Lakehouse.

5. Tom Brady hit Cordarelle Patterson for a score, making him the 70th player hes thrown a TD to over his career and tremendously disspointing Rob Gronkowski in the process. We mentioned this last week but that type of permisctuity at the QB position isnt necessarly a good thing. Its like saying my uncle must be the best driver in the entire world because he’s been acquitted of more DUIs then anyone else in state history. Tom Brady goes from player to player based on how he feels at the moment

6. Elon Musk is in trouble for a SEC violation where hes not aloud to serve on the board on Tesla anymore which is a total doublestander. How come Musk gets punished for white collar crime but Mychael Kendricks dosen’t have to play on the Browns anymore? Totally unbalanced punishments and if I’m Roger Goodell I’m taking a hard look at the SEC for coming down with the full weight of the United States goverment on top of Elon.

7. Kevin Mcdermott is the long snapper for the iIkings and on thursday night in there loss to the Greatest Show on Wheatgrass the LA Rams- he lost the tip of his pinkie finger and played the rest of the game. Not sure why everyones making such a big deal out of this you dont snap with your pinkie you snap with your brain. I want to know what happen to the extra bit of finger did he throw it away- if not it should be place in formaldhyde and turned into a trophy given to the player whose fingerprints were left all over the game. It jus tmeans hes 10% less likeley to be convicted of a crime and given everything thats happen with Everson Griffin I think thats probly a valuable asset on this Vikings team.

8. Aaron Rogers is mad at his coaches again calling them out publicaly after the game for a uninspried gameplan. This is actualy a welcoming development if your a Packers fan because it means hes literaly embodying the concept of treating your team like one big family.

9. Did Earl Thomas intetnionally break his leg in order to avoid suffering a season ending injury that he might not have as much experience rehabbing? Almost certainly not, but its a helpfull rhetorical device for me to think about to help me make a vague point about atheletes greed depsite me paying their salary. Earl Thomas plays free safety ironically because theres nothing free about how much money he wanted to get paid. He’d been the subject of alot of trade rumors, as recently as yesterday when many were speculating the Steelers could be interested in his services on account of Ryan Clark at the top of Mount Everest could provide better coverage in the secondary then this Pittsburgh roster. But now it looks like Earl will have to wait until Free Agency.

Maybe he was afraid of getting cut by the Seahawks due to poor performence in practice- performences that were clearly being whispered about around the league given how eager opposing QBs have been to try and take advantage of him during games and realy helping him put together a all-pro caliber season already. In other words- the secret was out about Earl- he was dogging it in practice so why not test him during the games. Unfortunately it backfired and hes still really good. So now Seattle is saying Goodbye Earl after this Dixie Chick flipped the bird at the Seahawks. You know who else broke there leg after exiting a big play and proceeded to disrespect leadership? Thats right John Wilkes Booth (D- Virginia).

10. Intresting to see coach Leach invoke sabermetrics by endorsing the art of WAR

Leach won a Football game depsite his team rushing for 0 yards on 13th attempts which is something Jeff Fisher could only hope for. SunTzu also said attack were they least suspect you, so maybe look for Coach Leach to try and score points in a bowl game this year.

11. Watch out NFL because youve just run afoul of the Cleveland Police Department

You know who else robbed a Baker thats right, Golden Tate.