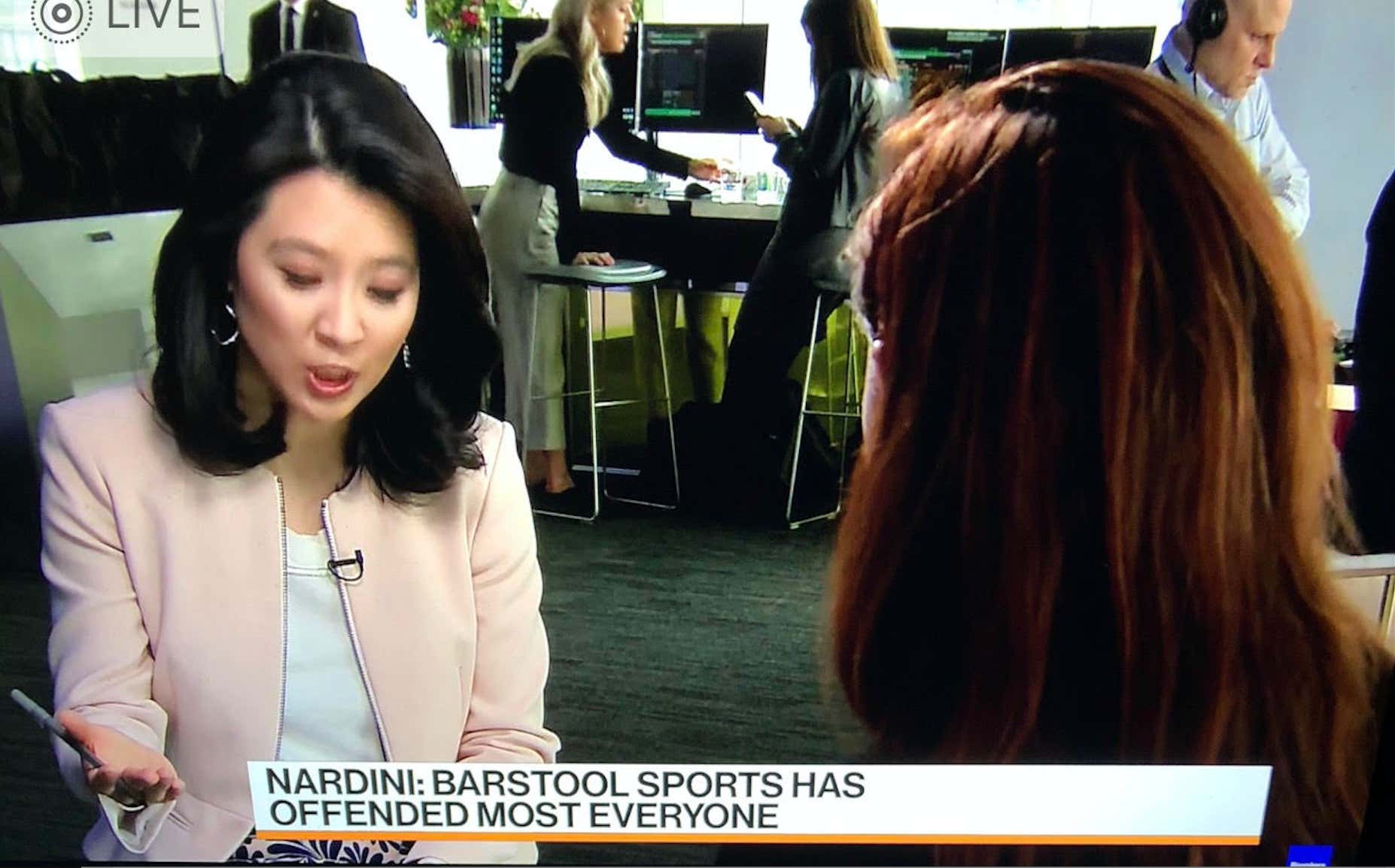 I’ve been reading Barstool Sports long enough to have some respect for what it takes to be funny and relevant every day on this blog. At the risk of beating a dead horse on what will end up being just another week in the great history of Barstool Sports, I wanted to say something because I feel strongly about this place, the people here and the work we do.

This whole thing is complicated.

I am a woman CEO. I am a woman CEO of a comedy brand dressed up as a sports media site. There aren’t a lot of us (female CEOs or comedy brands couched in sports). We have a female CRO, not a lot of those either. I’ve been in media for 20 years. I’d say 99% of my peers wouldn’t choose this path.

Would I do it again? Absolutely.

Does it piss me off when people diminish what I’ve done here and what I’m capable of by saying I’m a “token”?

I met Dave 3 years ago in a coffee shop in the West Village. I wasn’t sure what to expect. I found someone humble and accomplished. Someone I was impressed by.

I met someone who had built something that was, in my opinion, extraordinary. I also found someone who got excited about the same things I did. The Stoolies, content, commerce – all of it. I believed in Dave. I saw what he had been able to do and the type of talent and character he surrounded himself with. I went on to meet Dan, Kevin, Keith and Eric and thought they had it all: raw talent, a chip on their shoulders, good stories, and they were honest, good guys. I liked them.

On my second or third interview I hugged Dave. He said oh, we’re hugging. And I said yes, I’m a hugger.

We’ve been here ever since.

At first we worked out of coffee shops or hotel lobbies.  Then people slowly made their way to New York, and we moved onto a floor of an office on 27th street. Since then, we’ve grown to a second floor, and now, ten fold bigger, we will move into yet another office three times the size of this one.

All this in just 27 months. This could have been an epic failure. A disaster.

Instead we took this very vibrant, decade long story, and made it very big. I’m proud of that and I stand by it. I feel lucky to have had this opportunity and the chance to help build something so unique. I’ve loved working with Dave and I’ve loved building this with the original guys and now 115 other insanely talented people. I would put us up against anybody else any day, anytime, anywhere, and know for a fact we’d win. The talent and character at this company is that strong. I am so betting the over on Barstool.

Have we changed in two years? In some ways a lot. In other ways a little. In others still, not enough. We’ve grown a lot. We’re figuring things out.

The women in content run their own shows and we build around them the same way we do anyone else here: take an idea, big or small, grab a camera or a computer, and run with it. The women in business run our business and contribute to the backbone of this company.

In 2020 I’ll bet we have over 40 women – not because we should, but because there are kick ass women out there who can take Barstool to the moon.

Have I ruined Barstool or not ruined it enough?

The same people who write scathing articles about Barstool’s lack of diversity are the ones who say every female hire is a “token,” something to make our PR look good. It was what everyone said – and continues to say – about me. That Dave hired a female CEO as a token figurehead to give him cover.

That CEO has increased revenue 795%, quadrupled its lines of business, 10x’ed the size of the company in two years.

If that is what a token is, then Dave made a pretty good choice.

Or, if I was supposed to do nothing but be a shield for this company’s misogyny, then I guess a very bad one.

For every woman in this office who defends Barstool and says how comfortable they are working here, there is a woman on the outside who tells them they are wrong and tries to tear them down.

For every woman and person of color in this office who finds humor and entertainment in what we do, there is a middle aged white man on Twitter who dictates to us what sexism and racism are.

Every woman that is successful here is simply “complicit with a misogynistic culture.” Their individual achievements and successes are erased because of their association with a man who has written satire and sarcasm about everything under the sun for 15 years.

Want to know what I find sexism to be?

Telling a woman with 20+ years experience at some of the biggest media companies in the world that she is only in charge of a company because she wears a skirt.

I spent most of my career with smart algorithms or big firehoses of traffic. Traffic is what internet companies call people. Internet companies and traditional companies don’t know their fans. Fans don’t wear their t-shirts or show up for them on the internet or in real life. What these companies know are traffic and ratings because they pay to know them. They then package this up in nice presentations to sell ideas to advertisers who they know very well. I know this because I did it, and was good at it. The fan experience was irrelevant. The numbers are only looked at in the context of explaining performance to the advertisers to get the next sale, and around and around things go.

When I wasn’t at big companies, I was at small early stage ones and saw how excruciating it was to get fans. How painful the waiting and painstaking the experimentation to get attention, to break out of a wasteland of new shit no one cares about on the internet.

In my professional life, I always tried to find meaning, and I was always frustrated by conformity and the system. I felt something was missing.

In Barstool I found something very different. Something real, flawed, brilliant, childish, sophisticated and sophomoric all in one. Something with crazy potential. A real point of view. A story people cared about. Twelve years of things that were funny along with fuck ups and faux pas. Barstool has always been messy, been real, been complicated, been simultaneously so misunderstood and totally understood.

People love uncertainty in sports and entertainment. It’s the drug of content. To not know what is going to happen. People want stories, comebacks, fallibility, to create a connection with a character.

Now people want one sided consensus and conformity and clamor for judgement. That’s not good for comedy, for humor, for calling it like it is, and certainly not good for a decade long reality show created with radical transparency.

It’s also what makes Barstool more relevant than ever. The need for escape, the desire to see something other than what’s sanitized and PC.

I’m not saying I agree with it all, nor that anyone should. I honestly don’t think anyone at Barstool ever asked anyone to.

In hindsight, what I see most about Barstool in the early days is that they were never protective of themselves – what they cared about wasn’t the future, but the joke right then and there. It’s been like that for over a decade.

Most internet brands that began 10 years ago are dead. The rest deleted their history. Barstool didn’t. So, In fairness, I can see how we look horrible. Certainly not as horrible as people try to make it seem, but in a land of condemnation by headlines without context, I’m not sure that matters. Barstool is an allegory for a lot of things right now that have nothing to do with Barstool Sports, and we live in a time where an agenda is applied to everything, whether there is one or not.

If you are someone looking for that condemnation and judgement – you win. You will always win. Everything these guys have written and said for over a decade lives on the internet, in print, in audio, in video. Quotes can be pulled out of the context and presented as the real, serious opinions of their authors from now until eternity.

Not just that. We fuck up. We say the wrong thing sometimes. I texted too many people at night and on weekends. We make mistakes. When you are pushing the boundaries of what is currently politically correct in the effort to be funny, that is an expected result. We are offensive and people will be offended. If you believe there is malicious intent and an agenda behind it, we will never convince you otherwise.

But the reason why we have the most passionate fan base on the internet is because the majority of people know that is not the case. Yes, there are some real creeps in there, and some can be abhorrent assholes on Twitter- but that’s not what a Stoolie is. A Stoolie is someone who takes Barstool for what it is: people from all walks of life, who are just like them, who want to laugh, joke, and stop taking life so seriously for a few seconds.

Do I wish that these guys would bite their tongue or hold back sometimes? As a businesswoman, yes, maybe. As a CEO, and a fan of the brand in general, I know that is not how they operate. They are not journalists. They are comedians, satirists, sports fans, average guys and girls who believe in being blunt and honest and that if someone spits in your face, you don’t sit silently because you are worried about an ad deal- you fight back.

And that is what has made Barstool successful. That is why they are loved and appreciated and stopped in the street for pictures. Because they are real. What you see is what you get. How you talk to your friends in a bar with no cameras around is how the people here have talked, publicly and visibly, for 15 years.

I love Barstool and the people here. I believe in us. The way we have grown and evolved in the last three years is phenomenal. The work we are doing is groundbreaking.

But more then anything, I am proud of the integrity and character inside this company. I have found myself here and feel at home. On weeks like these I remind myself that there is so much more to this place than meets the eye and there are good reasons for its strength. I think authenticity will prevail and I believe change should only come from within. We own it.

That’s all I wanted to say. 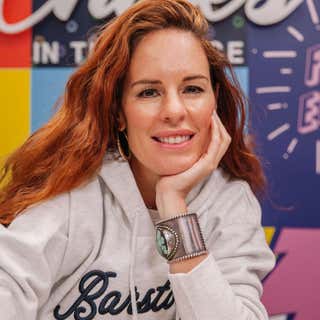