Watch Sunday Night Sticks: Squad Up In Fortnight And Discuss The Retirement Of Clickbait Smit from barstoolsports on www.twitch.tv 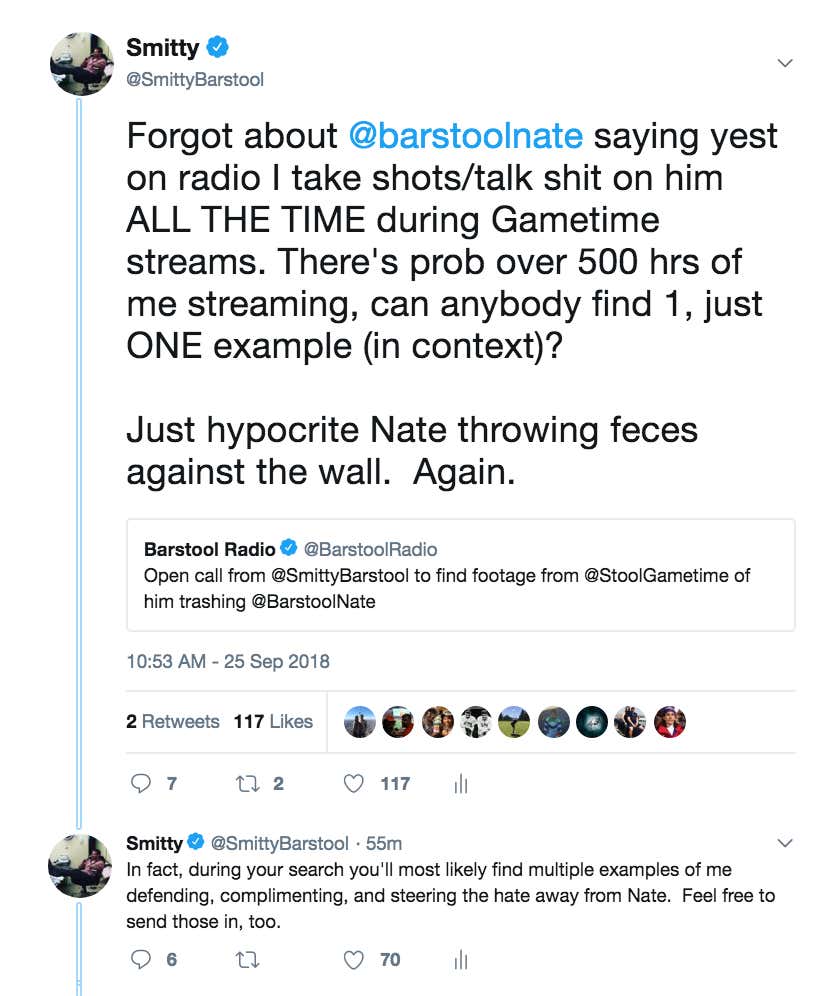 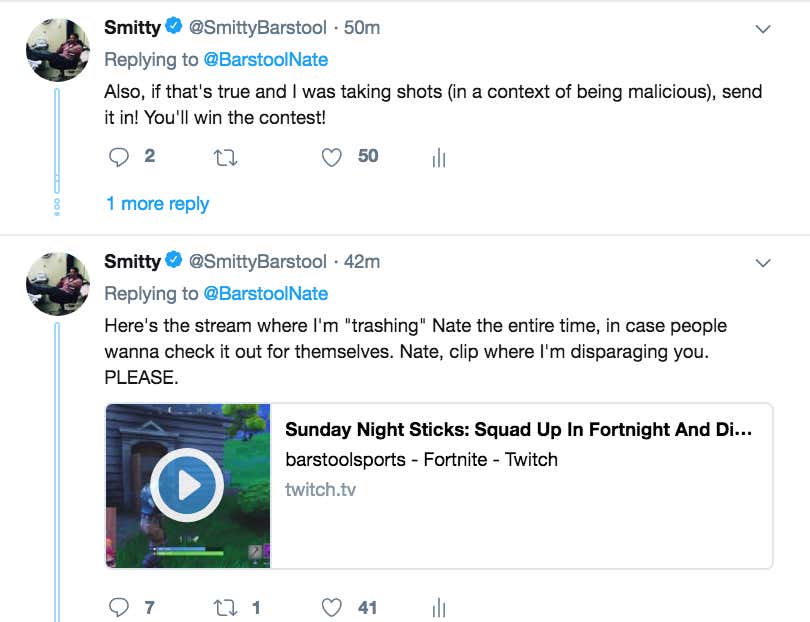 So this was a little nugget Nate threw out there on radio yesterday. He claims I take shots/talk shit on him ALL THE TIME on Gametime streams. Um, ok? I was taken a little aback because, honestly, I didn’t think I did anything of the sort. Like, ever on streams. And you know what? I don’t. But Nate thinks he can just throw feces against the wall and smear my good name to try to deflect how bad he looks. Well, no no no no no, my little friend. He already tried little tactic multiple times last week and there was factual evidence to rebuttal his lies – INSTANTLY: 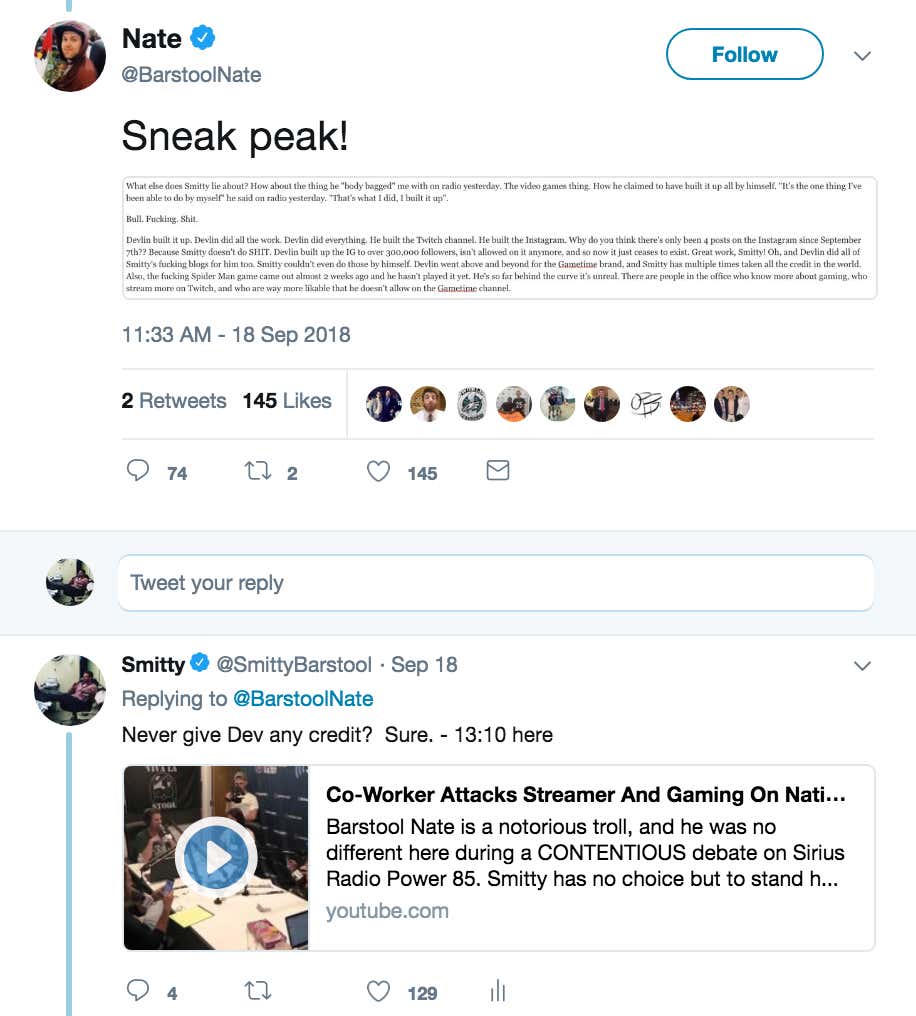 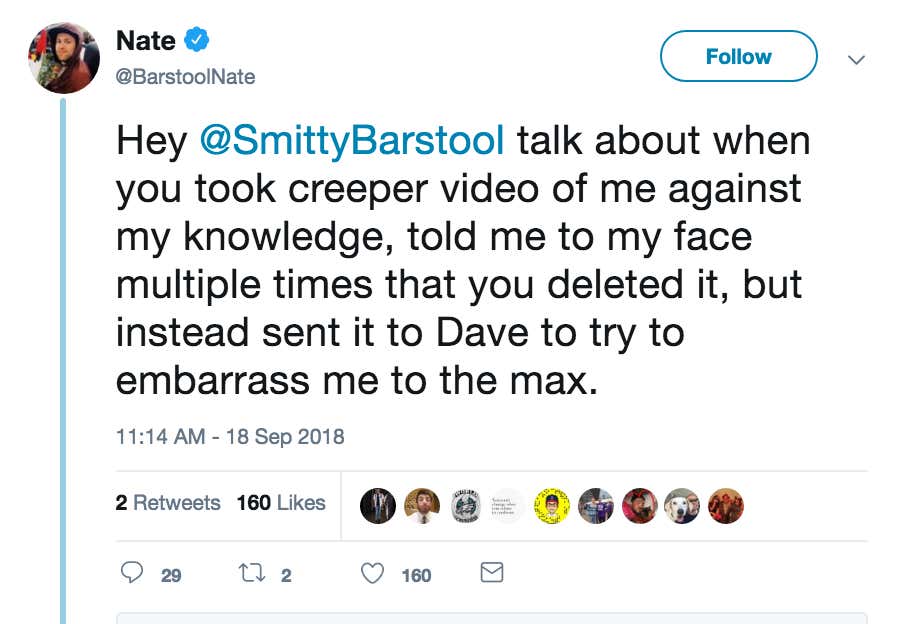 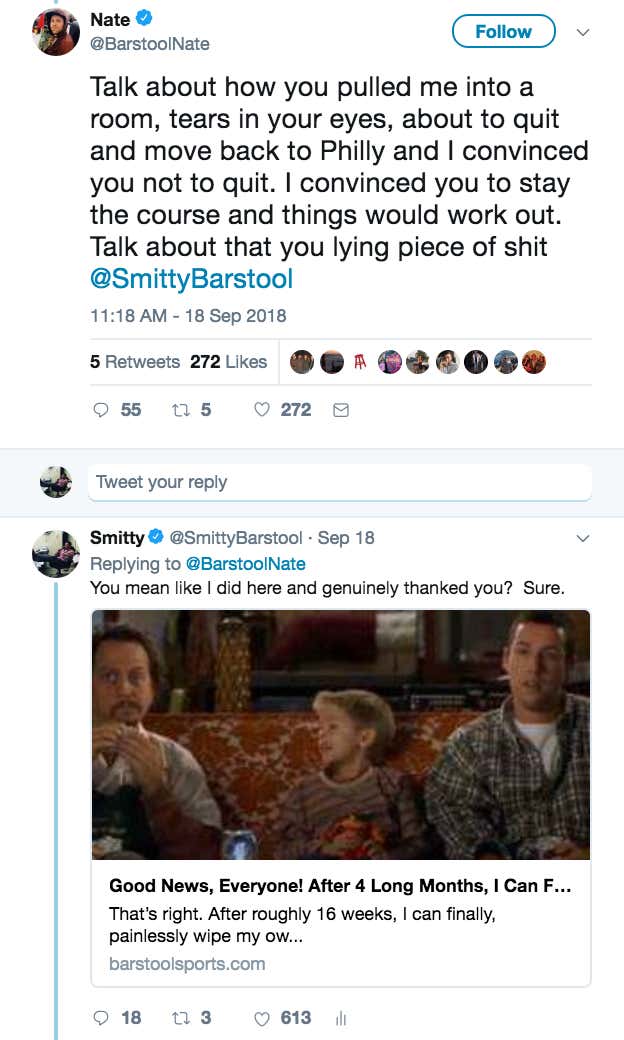 Lied about not talking about how he helped me out during a down time. INSTANTLY REFUTED. Lied about me not giving Devlin credit constantly for Gametime. INSTANTLY REFUTED. Lied about me taking a “creeper” video of him in Vegas and sending to Dave in the name of content. OK. I’ll give him that one, even though I highly disagree Nate arguing over checks to an Elvis impersonator can be described as “Creeper”.

But now Nate claims I bash him on Gametime streams. Well, time to prove him right, folks. If you’re the first one to find an instance of me bashing Nate in context on streams, you get $20. Boom. Straight Andrew Jackson only. It’s as simple as that. If I talk as much outrageous shit on streams as Nate claims we may have a few new millionaires on our hands after the clips are sent in. Now, “In Context”, mind you. That means I bring him up with a clear malicious intention to take shots, talk shit, or make people hate him. It can’t be me explaining a real-life situation that just so happens it makes him look bad (99% of reality) or clearly joking with the chat with a “Ya know what, Fuck Nate.” I’m talking about disparaging him in the obvious manner that he claims. Actually, just basically send in anything that could be claimed as bashing Nate and I’ll post it all within context. All the streams are at twitch.tv/barstoolsports – Including the latest where he claims I talk shit the ENTIRE time, but conveniently doesn’t want to post the footage where I am indeed taking shots. The tapes are right there, #HypocriteNate. Everything you need to prove yourself right.

Good luck. And never forget that Nate certainly does consider himself the “Moral Authority” of the office when it comes to bashing others…

PS – This was a Smitty production. I told CBS to keep it in his pants, I could handle this one.