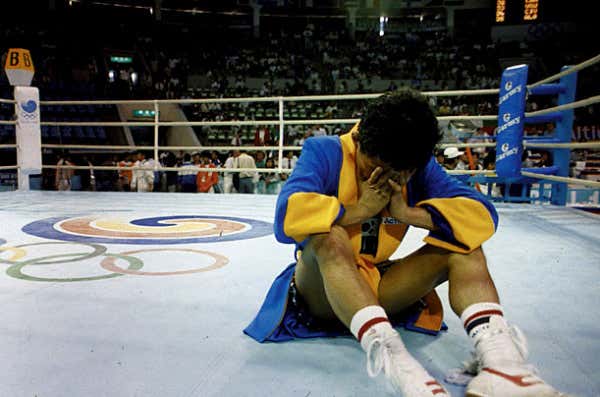 Controversy clouds, Boxing at the Summer Olympics in Seoul as Aleksander Hristov of Bulgaria beats Seoul native Byun Jung-Il in a second round Bantamweight match. The 19-year-old Korean boxer is penalized for headbutting by referee Keith Walker, resulting in a 4-1 win for Hristov. After the first five Korea officials attack Walker, while Byun Jung-Il sat in the ring until the lights were turned off in the arena.

The 1988 Summer Olympics was a chance for Seoul to reintroduce itself to the world. The county had been through a center of tribulation, with Japanese occupation followed by a civil war that ended the peninsula nation divide in two, with an uneasy cease-fire and non-stop tension at the border. As usual, the host nation, experience a great increase in their medal tally, and South Korea was no different, finishing fourth with 33 overall medals.

Boxing had been one of the sports, that South Korea had been expected to do well in. One of their favorites was Byun Jung-Il a 19-year-old native of Seoul fighting in the Bantamweight Class (54KG/119lb). In his second-round match, Jung-Il was in firm control against Aleksander Hristov of Bulgaria. However, late in the three-round match, the Korea favorite was assessed a two-point penalty for headbutting. This flipped the match in favor of Hristov who won of four of five judges scorecards.

After Aleksander Hristov was announced as the winner, all hell broke loose as five Korea officials jumped into the ring and attacked the referee. This included a security guard who removed his yellow security jacket to join in the fracas. Other referees came down to rescue, Walker who suffered a black eye. Byun Jung-Il meanwhile sat down in the ring and refuse to leave. Jung-Il remained in the ring more than an hour after the match, as the lights in the area were turned off to get him to give up his protest. As a result, five Korean Boxing officials and Byun Jung-Il were suspended the remainder of the games.

As Keith Walker was given a police escort out of the building, the New Zealand embassy in Seoul was flooded with angry calls asking for Walker to be turned over. Korea in an appeal of the result argued a warning should have been given before the point deduction. Aleksander Hristov would go on to get the Silver Medal, losing the final match to American Kennedy McKinney. Some have theorized fear over similar reactions led to the controversial decision giving the Gold Medal to Si-Hun Park over Roy Jones Jr. in the Light Middleweight Class (71KG, 157lb) class.