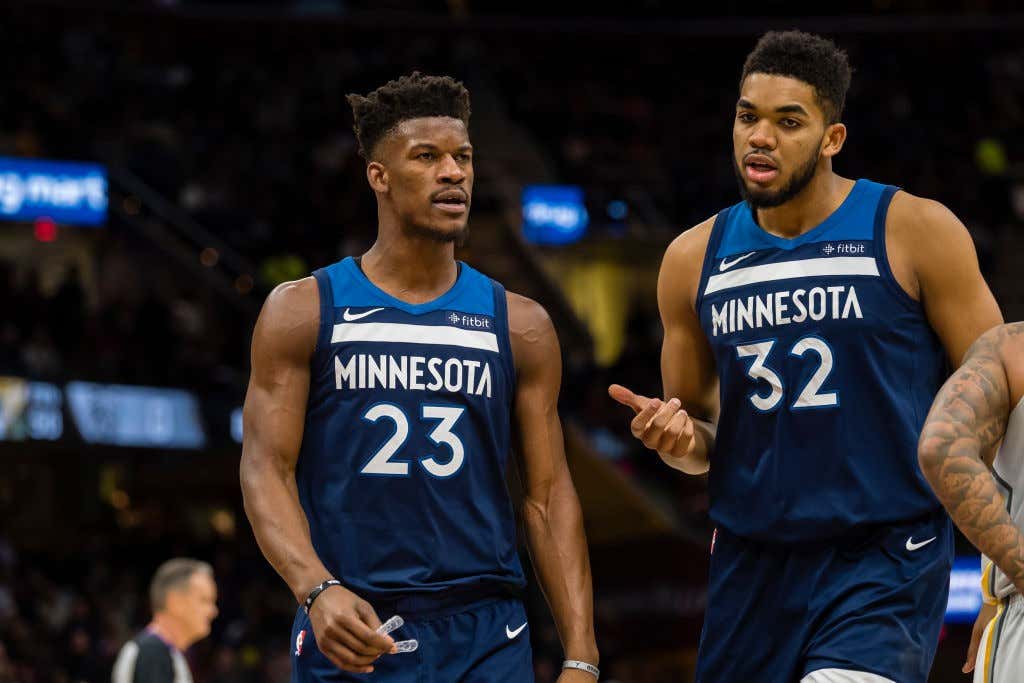 But that doesn’t mean the rift is nonexistent.

Towns reportedly won’t sign his rookie-scale extension until Minnesota handles the Butler situation, and the standoff apparently isn’t at all over haggling about contract terms, particularly what would happen if Towns qualifies next season for the super-max.

“They’re offering him as much money as they can. I’m led to believe that a big reason why he hasn’t signed it is that he – through his agent, Leon Rose – went to the Wolves and said, “Hey, I can’t coexist with Jimmy. Do something about it. So, figure out the Jimmy situation. On top of that – whether it’s right or wrong, this is the way he feels – that it’s been Jimmy and Thibs ganging up on him.”

As we know, things aren’t great in Minnesota at the moment. Perhaps everyone is focusing on the Vikings as a coping mechanism, but with the season about to start, this Timberwolves drama is not going anywhere until this whole Jimmy Butler situation is resolved, and by resolved I mean traded. I don’t think it’s a secret that KAT and Butler hate each other, I mean it’s clear these two had problems with each other

and as more and more weeks went by and KAT didn’t sign his rookie extension, something didn’t pass the smell test. Now personally I thought maybe it was the opposite, that he was holding off on signing until the knew Butler would be back. I can understand wanting to know how the team is going to look before committing when you’re the franchise guy. But to see that it’s actually a situation where KAT won’t sign until Butler is gone, well that changes things a little bit. Now if your MIN, you have to trade him even if you can only get 20 cents on the dollar. You do not fuck with the happiness of Karl Anthony-Towns. I know Thibs isn’t the best GM on the planet, but not even HE can be that stupid. That’s why just like I said yesterday, if I’m the owner I’m asking KAT if he wants both Butler and Thibs gone. It’s more than likely they’ll stink even with Thibs and no Butler, so why not just clean house and let KAT call all the shots? Makes you also wonder if he had any impact on the Wiggins extension. Maybe that’s his boy, because if you remember all Wiggins needed to secure that bad was to promise the owner he was going to be better.

News flash: He has not gotten any better in four years.

Look it’s true that KAT has some issues on the court, especially defensively. It’s true he can seem passive, but it’s maybe also true Thibs doesn’t really know how to use him properly. Of course he’s going to take any side with Butler, that’s his dude, and I think that’s the root of this whole problem. Thibs is giving the franchise talent treatment to the wrong dude.

KAT is your future, and all of the sudden the future looks pretty dismal in the Twin Cities. Bad news for KAT is even if he never signs that extension, he’ll be a RFA and you bet your ass MIN will just match whatever offer he gets. So the reality, unfortunately, is he’s stuck in this situation for at least another 4ish years, unless he can convince them to trade him before he gets to UFA. Sucks for the nice people of Minnesota, but for the rest of us this is exactly the type of drama I need to get ready for the regular season.

But seriously, do the right thing Timberwolves. Whatever KAT wants you do and you don’t think twice. Don’t be idiots.